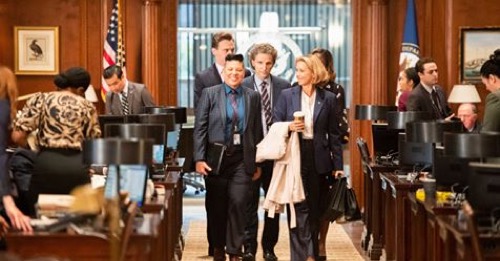 Tonight on CBS Madam Secretary airs with an all-new Sunday, October 28, 2018, season 5 episode 4 called, “Reqiuem,” and we have your Madam Secretary recap below. On tonight’s Madam Secretary episode, as per the CBS synopsis, “The remains of U.S. soldiers who served in World War II are uncovered in Southeast Asia, but Elizabeth’s hopes of bringing them home quickly fade when a stubborn leader stands in her way.

Also, Henry and Stevie find themselves publicly targeted by a restaurant owner who is angry about Elizabeth’s policies, and Alison volunteers for a local congressional campaign.”

A captain and his crew are under heavy fire in the air. He looks to the picture on his dash and kisses it. A man arrives to see a woman Gloria and her daughter. They hand her a letter from the secretary of war. She begins to cry.

Gloria answers the phone. She is much older now. Someone on the other ends gives her some shocking news. Weeks later, Russell shows Liz a video of Gloria talking to the public about how her father and 30 other solders’ remains were discovered after 73 years and they want the bodies brought home. Russell wants her to deal with it.

Liz gets the full cooperation of the DoD. She discovers that the president of the Philippines do not want to hand over the remains because they want a full-time ambassador. It is a sign of respect.  She also discovers that they want money for weapons to fight their insurgents. They don’t want it to go public because if the world knows they need the aid they look weak.

Stevie and Henry go out for breakfast at their usual place. The owner asks them to live. He is a veteran and has heard about the soldiers remains that Dalton isn’t rushing to have returned to their families. Stevi is outraged. Henry gets up and tells her they need to go.

Liz meets with Gloria. Liz tells her she respects her fight to get her father and the others returned home but she thinks her statements are harming their efforts. She agrees to stand down for a bit but they need to get it done. Liz meets with Dalton and Russell. Dalton wants to slap the president of the Philippines with sanctions. Liz advices against it.

Liz and Kat meet with a senator to try and change his mind about his vote against the Philippines receiving weapons aid and explain that it is also tied to bringing soldiers home. He cannot help them. Desperate, Liz chats by video with the president of the Philippines. He isn’t willing to give up the bodies until he gets his aid.

The team shows Liz bad press of Stevi and Henry getting “kicked out” of a breakfast diner. She is irritated. They ask her not to respond. She musters up an play and says she is going to ignore it.

Liz arrives in the Philippines. She has a meeting with the president but he isn’t there. He is in a gym. She arrives to see him. He is cocky and arrogant, but Liz whispers to him that she will reveal how he broke his nose and that he is begging for aid.

Liz arrives home. The bodies are on their way. She gets bad news. Gloria’s father isn’t getting a military funeral because he went AWOL for 17 years during his last mission. They bring it to Dalton and he agrees. Liz wants to be the one to tell Gloria.

At home, Henry tells Liz she can lessen the blow to Gloria after he took a look at her father’s file.

Russell tells Liz that the man who kicked Stevi and Henry out of is restaurant is friends with the senator who wouldn’t stand behind her aid to the Philippines. He did that because he might be running for president. And he thinks she is running too. He tells her not to speak out, but that doesn’t mean someone else can’t. Kat pays him a visit and informs him to stop messing with Liz’s family or she will visit him next.

Liz tells Gloria the truth about her father and promises that his file is sealed. She can continue to work on the foundation she founded in his name.

Liz demands Ali vote even if she only agrees with 95% of a candidates’ views. She heads to the polls. Meanwhile, Liz stands by Gloria as they other soldiers re laid to rest.