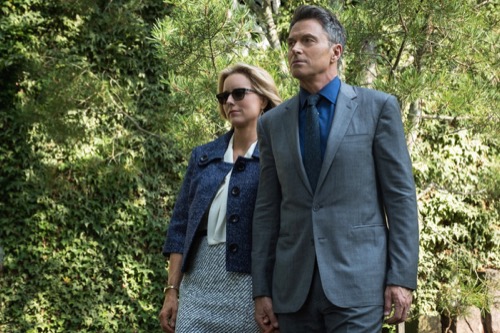 Tonight on CBS Madam Secretary airs with an all-new Sunday, November 18, 2018, season 5 episode 7 called, “Baby Steps,” and we have your Madam Secretary recap below. On tonight’s Madam Secretary episode, as per the CBS synopsis, “Vice President Teresa Hurst asks Elizabeth for help when a surrogate carrying her future grandchild is arrested in Laos for human trafficking. Also, Henry tries to protect Stevie from danger when he suspects that she’s being followed by a Russian operative, and Blake deals with the demanding and costly instructions of a delegation of Japanese gardeners.”

A couple is on their way to Lous to meet their surrogate mother and new baby. When they arrive at the house they see soldiers there taking women away in a van. The husband sees what is happening and tells the soldier they have the wrong address.

Liz, Dalton and the others are talking about human trafficking. Liz explains that they threatened to cut off Laos’ aid if they didn’t stop the trafficking. They have since stopped. Teresa tells Dalton about a couple she knows who just traveled there and saw their surrogate taken away by traffickers. Dalton decides that the US will stay out of it. Teresa pulls Liz aside and tells her the couple is her daughter and son in law. She has come to her as a mother and grandmother and if she said anything Dalton would have used it against her not to mention that it is a conflict of interest. While they will both be running for president soon, she trusts Liz and needs her help. Liz tells her she will see what she can do.

Blake shows Jay a very expensive watch he has received from someone who wants a one on one with Liz. Jay tells him to return it. As well as all the other gifts. Jay agrees.

Liz asks Jay to find a surrogate. She cannot tell him why and needs him to be quiet about it.

Henry meets with a former CIA friend. He tells Henry that Stevie is being followed by Dmitri’s sister, Talia. Stevie has no idea and they have a tail on her but they think Talia may have been leveraged by Russia.

Jay tells Liz he has found the surrogate. Liz is thrilled and gets to thinking she could form a coalition for surrogates worldwide and have Laos join. She tells Teresa about her idea. She thinks it is a pipe dream.

Henry tracks down Talia at a cafe and has them shut it down. He talks to her. She tells him Dmitri asked her to make sure Stevie was okay following the White House attacks.

At home that night, Henry tells Liz about Talia. She thinks it is sweet and Stevie should know. Ally comes in and asks them if they have seen the news. Teresa has made headlines. They are reporting her daughter used a sex slave as a surrogate.

The team meets at the White House late to talk about the news. Teresa tells Dalton she didn’t want to bother him with her personal life. Dalton cannot believe Liz kept him in the dark. After some talking, Dalton decides to cut Laos’ aid. Henry agrees and feels terrible for going against Liz. They talk on the way home.

Daisy and Matt arrive at the office to find Blake has been there all night and is a bit overtired and crazy. He cannot seem to find funding for a garden dedicated to the Japanese Embassy. He gets an idea and goes to visit the man who has been trying to bribe him for a one on one with Liz. After some back and forth the man agrees to make a large donation.

Liz meets by video chat with a Laos official. He isn’t happy she is telling him about their legal system. All he wants is the aid. When Liz doesn’t budge, he lets her go to speak with China.

Henry makes Stevie pancakes and breaks the news about Dmitri. She apologizes for putting them in this situation. Henry understands and has received a letter from Dmitri to give to Stevie, just this one time. After all of this, they can never talk again. H hands her the letter. She thanks him.

Liz thanks Jay for not calling her out when the news about Teresa broke. He shares that he trusts her judgment but he wouldn’t have trusted Teresa. Liz gives the opening speech for the gardens. Blake’s donor is thrilled with the little bench that says his name with a tribute to his grandmother. Liz and Henry walk through the peace gardens.

Liz meets with Teresa alone. She knows she was the one who leaked the headlines about herself. Teresa admits she did it for her unborn grandchild. They talk about how she could still get that grandchild by leading the charge against Laos and apologizing for the Vietnam War so long ago.

Later, Teresa gives a speech in Laos after her daughter and son in law meet with their surrogate.

Stevie goes back to her and Dmitri’s meeting place to read the love letter. She cries and laughs.

In Alaska, Dmitri gets a letter. It is from Stevie, a one time deal she was given to write him back. He smiles big as he reads.