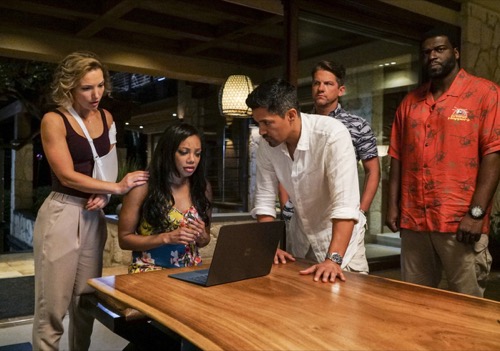 Tonight on CBS their reboot of the classic series Magnum P.I. premieres with an all-new September 24, 2018, episode and we have your Magnum P.I.recap below.  On tonight’s Magnum P.I. season 1 series premiere as per the CBS synopsis, “In the premiere, decorated former Navy SEAL Thomas Magnum returns home from Afghanistan and repurposes his military skills to become a private investigator.”

In North Korea, Magnum touches down from a jump before running to a shack to retrieve a doctor. The doctor wants to take his family with him. Magnum tells him that wasn’t the arrangement. Soldiers surround the shack. Magnum gets them all in a car and blows out of the side of the shack. The soldiers chase them, shooting from behind. Magnum radios to his buddies in the helicopter above. They can’t see him so he rips the car around and shoots at the truck following. It explodes.

Magnum eases his eye injury with a bag of peas while TC reads from a book about Magnum’s adventures. Rick makes them drinks while Sebastian sits with them all laughing and talking.

Jules from the main house, the wife of Magnum’s buddy Robin Masters, comes to tell Magnum to leave her dogs alone. Someone named Emily is at the gate. Magnum goes to meet her. She is her client. He has been spying on her husband who is definitely having an affair. Magnum tells her he will help her find a lawyer.

Magnum gets back from a kayaking trip only to be chased down by Robin’s Dobermans. Magnum gets a call about a job from his friend Nuzo. He arrives at Nuzo’s as he is being dragged out of the house by EMTs who break out guns and start shooting before taking off with Nuzo.

Magnum meets with Nuzo’s wife. She is upset and has no idea why he wanted to hire Magnum. A local officer comes in and pulls Magnum aside. He is working the case now and tells Magnum to back off. Magnum finds a note to him from Nuzo. It has a code on it he needs to figure it out.

Magnum fights with Robin. He needs another car. The one he borrowed has been shot up. She refuses him until he tells her Nuzo has been kidnapped.

Magnum catches a lead on where the ambulance might be. TC and Rick meet up with Magnum so they can get these guys together. They find the ambulance with Nuzo dead inside.

The local officer arrives to see Magnum at the scene. He tells Magnum to go home. But before he goes he asks Magnum why Nuzo was reaching out to Naval Service. Magnum tells him he has no idea.

Magnum heads to meet a Naval officer by the name of Buck. He tells him about Nuzo. Buck tells Magnum Nuzo called to do a background check on a few officers who were reprimanded. Buck isn’t willing to give anymore Intel, its classified. Magnum accuses him of withholding because they have bad blood between them. Buck doesn’t totally disagree.

Robin meets with Nuzo’s wife Laura to ease her with a cup of tea. Robin reaches out to Magnum to offer her help. Magnum meets with a coroner to see if she will tell him if Nuzo was waterboarded. Meanwhile, Robin has discovered the identity of the two killers on Nuzo’s computer after she hacks her way in. Two ex-soldiers show up and rough her up. She takes them both down but gets shot in the arm.

Magnum discovers Nuzo was tortured. He tells Nuzo’s wife and the others. Magnum comforts Nuzo’s son and tells him about how he lost his dad when he was young too.

The doctor Magnum saved offers a tip, maybe the code Nuzo left behind are coordinates. Magnum is accosted out by his car by two men, the same two who attacked Robin. They tell Magnum to stop looking for information.

Rick drives Magnum out to the coordinates as he makes fun of him for having his ass kicked so much this week. Magnum drops down into the ocean at the location. He finds gold. He and Rick bring it to Buck and ask for answers. Meanwhile, Magnum gave the local officer a heads up but by the time he got there the rest of the gold was gone.

Magnum asks Julie for her help with some satellite work. He knows she is a former MI6. She denies it but agrees to help him. She locates the coordinates of a boat that must have picked up the gold. Magnum cannot get there fast enough as they make their getaway in a truck. Magnum calls on TC and Rick for help. Magnum tracks them down and chases the truck that begins firing at him. TC takes out the passenger from the helicopter. Magnum whips the car around and shoots at the truck who drives off the ledge to their death. Magnum jumps out of his car and grabs on to the helicopter just in time.
They all head to Nuzo’s funeral.