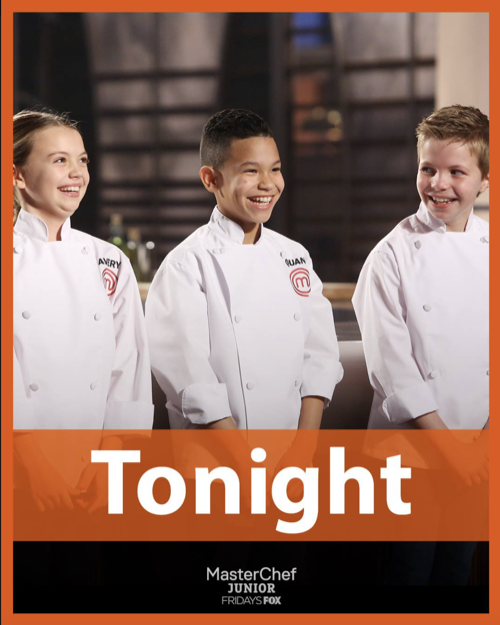 Tonight on FOX Gordon Ramsay’s Masterchef Junior continues with an all-new Friday, May 18, 2018,  season 6 finale called “The Finale Pt 1; The Finale Pt 2: The Winner,” and we have your weekly Masterchef Junior recap below. On tonight’s Masterchef Junior episode as per the FOX synopsis, “After a season’s worth of challenges that tested the cooking abilities of young contestants from across the nation, only three junior home cooks remain. The finalists face one last battle, during which they must prepare a three-course meal that will impress the judges. Then, the winner is announced.”

It is finale night, Beni, Quani, and Avery are the final three. To cheer them on tonight are their fellow competitors and their family and friends. For the grand finale, each of them has to show just how much they have learned in the Master Chef kitchen by preparing a flawless three-course dinner – the best three-course dinner of their entire lives.

They have ten minutes to go to the pantry and choose their ingredients. It is now time for them to put together the most show-stopping three-course dinner of their lives. First up is the appetizer course; Beni is making Corn Bellini with Smoked Salmon Herbed Creme Fresh and Pickled Radishes and Salmon Roe, Quani is making Crispy Grit Cake with Fried Green Tomato – Spicy Tomato Sauce and Crab Chow Chow, Avery is making Grilled Lobster with Avocado Crema – Salsa and Blue Corn Crisp. They have 60 minutes to execute their incredible appetizers.

The home cooks bring their appetizers into the restaurant. Avery is first, Gordon cuts into his lobster and it’s beautifully cooked. He loves the acidity of the salsa, for him it is perfect and he is impressed. Christina loves it, she calls it quite lovely but says that it was overdressed with tomatoes. Joe loves the style and he thinks the cook on the lobster was perfect with the combination of the tomatoes.

Qauni is next, Gordon says he is transported down south, he loves it, calls it mind-blowing. Christina loves that he was thinking about the components of the dish, she loves the sweet heat but her prawn was a little undercooked. Joe says that he is a chef, he has a narrative with an opinion of him and where he comes from.

Beni is the last one to present, Gordon says it is incredible, the balance is right and the seasoning. Christina loves the color of the dish, its a stunning appetizer, Joe says it is spot on restaurant quality and she has amazing knife skills but could not have put the small raw radishes on the plate.

Gordon tells everyone to get back into the kitchen and get ready to do their entrees. Each of them has 60 minutes to prepare their entrees.

It’s time for the home cooks to bring their entrees into the restaurant. Avery made Seared Ribeye Cap with Mustard Greens, Glazed Onions, Chimichurri and Bone Marrow Butter. Joe cuts into the steak and the cook on the steak is spot on; he loves it and tells her it is a good job. Christina loves the meat, the spirit of the dish, but she thinks there was too much butter. Gordon says that his steak is beautifully seared but thinks the dish needed a little more love on the surroundings.

Quani is up next, he made Duck Fat Fried Catfish with Spicy Greens, Pickled Okra and Corn Puree. Joe says it is pretty fantastic, all an incredible foundation for the best catfish he has ever had in his life. Christina loves the greens and the whole dish on a whole. Gordon says they released the beast, he has raised this dish to another level.

The last dish belongs to Beni, she made Grilled Veal Chop with Beet-Potato Fondant, Red Cabbage Sauerkraut and Mustard Cream Sauce. Joe says that he would make her a sous chef, she has gone beyond, an amazing job. Christina loves the mustard cream sauce but didn’t need the green salad. Gordon says she nailed the veal chop but the beetroots needed another 4 or 5 minutes.

Time to go back into the kitchen and prepare the most important desert of their young lives. So far, Avery is trailing but she could pick it up in this round because she is an amazing baker.

Time to bring their deserts into the restaurant. Beni is first, she made Deconstructed Apple Tartlet with Walnut Crumble, Apple-Brandy Cream, and Cranberry Coulis. Christina says it is perfection but would have loved the apples built up a bit more. Joe thinks it is great and perfectly cooked, perfection and reminds him of deserts his grandmother cooks. Gordon licked the plate, he loved it and says it was seriously well done.

Quani is next, he made Blueberry Tart with Marshmallow Meringue, Blueberries, and Lemon Poppy Seed Tuile. Joe is upset that he was served in the metal tartlet pan it was cooked in but says it was interesting. Christina thinks it really is delicious but it was not perfectly rolled out, he fell short on some of the techniques. Gordon thinks it is great, but the blueberries outside the tart tasted better than the ones inside, good job though.

The last tasting is Avery, she made Tres Leches Cake with Salted Caramel Sauce, Kettle Corn, and Whipped Cream. Christine says it is rich and a minute or two overcooked but great and a lovely dessert. Joe says there is a lot to like about this dessert, he loves the bite of salt every now and then, it is moist and it draws you in. Gordon says it is delicious and clever.

This is the moment of truth, the three home cooks are big inspirations but only one of them can be the winner. The winner of Masterchef Junior goes to Beni.