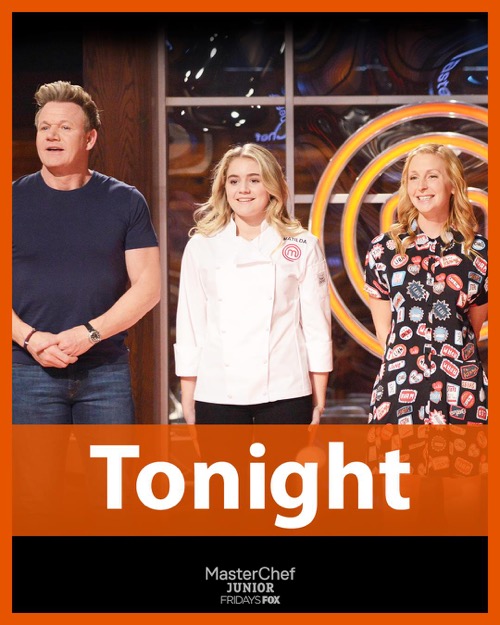 Tonight on FOX Gordon Ramsay’s Masterchef Junior continues with an all-new Friday, April 6, 2018,  season 6 episode 7 called “Donut Sweat It,” and we have your weekly Masterchef Junior recap below. On tonight’s Masterchef Junior episode as per the FOX synopsis, “The junior chefs split up into pairs and have to decorate and frost as many specialty donuts as they can in just 10 minutes, all while being tied by the ankle to their partner. Later in the kitchen, Gordon Ramsay’s daughter, Matilda, gives the contestants a masterclass on how to make her version of a hamburger and French fries. Then, the junior chefs must do their best to replicate it.”

Tonight it is a three-legged race, the competition gets much closer and the judges are in for a frosting fate. In this challenge, the cooks will be perfecting the donut. Christina has made donuts for everyone and all the cooks go ahead and take one, but Gordon tells them to hold on before they take a bite. If they picked up a donut that is green, yellow or pink then they will participate in the challenge, everyone else heads to the balcony.

The teams are Red: Emily & Olivia, Yellow: Beni & Quani and Green: Mikey & Pearce. In this challenge, the judges want as many donuts as they can frost in just ten minutes. The two teams who make the most perfectly frosted donuts will be safe from having to participate in the next challenge and there is more than an advantage at stake. Each team is working for one of the judges and the teams that lose will be responsible for that judge being covered with frosting. Green team is playing for Joe, Yellow team for Christina and Red team is for Gordon. Joe announces that this is a three-legged donut decorating race.

Joe says that since the competition was about teamwork, both Gordon and Christina should be iced, they join Joe and all three of them are iced from head to toe.

Red & Yellow teams win and get to enjoy a box of donuts that Christina made for them. Two people will be voted out and they are going to begin a tough challenge. Tonight Gordon Ramsay’s daughter, age 15, Matilda Ramsay who has her own cookbook and show in the UK. To save themselves from elimination they are going to be making burgers Matilda’s way.

They watch Matilda make her burger and fries, now they have to replicate it. They have 45 minutes to replicate the burger to perfection – it’s an elimination challenge.

Mike is first, he did very well. Camson is next, his burger is raw inside. Ariana’s burger is great, just the fries are a bit soggy.

Avery’s burger is overcooked and the fries are too small. Anthony cooked more than one burger because he forgot to put in the cheese, the burger is a little overcooked.

Camson, Avery, Maria, and Remy are called to the front. Avery and Remy are asked to step forward and are safe. Camson and Maria are eliminated.