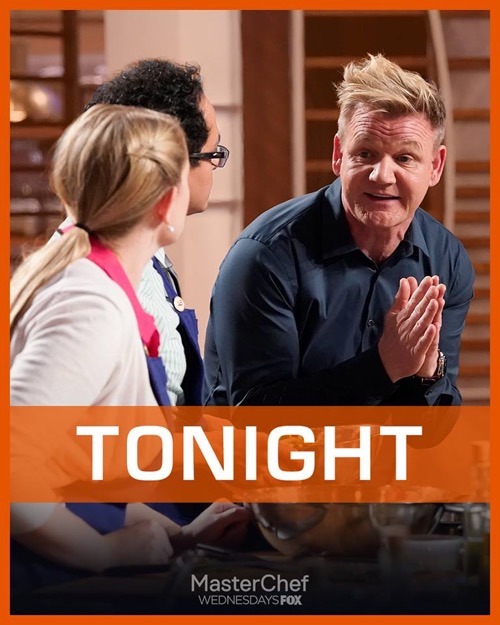 Tonight on FOX Gordon Ramsay’s Masterchef continues with an all-new Wednesday, August 1, 2018,  season 9 episode 11 called “The Kids Are Alright,” and we have your weekly Masterchef recap below. On tonight’s Masterchef episode as per the FOX synopsis, “The Top 14 contestants are split into two teams to compete in a fine dining challenge and are to cook 39 dishes for a group of very discerning judges who have big expectations. Contestants are surprised when diners are revealed and forced to scramble and alter their dishes to accommodate the guests. Ultimately the winning team’s recipe will be printed in Family Circle Magazine. The losing team will compete in a cupcake pressure test with special guest and pastry chef Christina Tosi.”

The Top 13 opened a fine dining restaurant on tonight’s all-new episode of “MasterChef”. It was another a team challenge and so the group was split into the Red Team and the Blue Team. However, there was an additional challenge. They were only going to be given ninety minutes to cook entrees worthy of a fine dining restaurant and they also could only cook with the ingredients they had been given. Each team was given a box full of ingredients and they eventually decided what they were going to cook once a team captain had been chosen for each team. The captains tonight were the ones that won the Five Ingredients Challenge and so they were Julia and S.J. S.J. had never been chosen to be a captain before and this challenge allowed him to rise to the occasion. And Julia meanwhile had been captain before, she had been a captain of a winning team and it made her a threat this time around.

Julia liked to be the only voice in the kitchen. She was the one that was going to pick what they were going to cook and she hadn’t wanted a team that couldn’t take direction. Julia ended up picking a team she believed were good at communicating in the kitchen and who would be capable of doing their stations without much supervision. The only one she hadn’t picked had been Shanika. Shanika had been the only person left and therefore Julia had to take her, but she hadn’t been sure about Shanika. Shanika had a reputation for being outspoken and she tended to believe she was always right, which could be a problem for some people. Julia had decided to do what she normally did and so she chose to ignore most of Shanika’s grumblings that later got louder and louder. It turns out there was something that no one could foresee and that was their clientele.

The diners for tonight were a bunch of kids. There were around eight to ten and so both teams had needed to rethink their menus. The Blue Team was being led by SJ and SJ had chosen to run his team like a democracy. He allowed everyone to have an opinion on what they should cook and he thought he could rely on Mark. Mark was the most technical person on the team and he had had a great idea for the sauce to go with the steak. He even said he could it within the time frame and only the judges realized Mark was making the sauce by taking shortcuts. He was cooking an egg sauce wrongly and the judges had tried to tell him to do it differently. They told him how it wouldn’t be ready in time and it wouldn’t be fully cooked because that what’ve they learned from their own experiences. And Mark chose to ignore them.

Mark was so used to doing something his own way at his family restaurant that he ruined the sauce by the time it came to plating. The plates had come out and the sauce couldn’t be used because it was raw. It ended up needed to be axed at the last minute and so the Blue Team sent out their New York Strip with Crispy Potatoes and Asparagus without any sauce. The Red Team sent out Filet Mignon with Butternut Squash Puree and Broccolini. They had added some sweetness to the puree and there was a mini argument between Julia and Shanika over whether or not they should go ahead with cooking the steak and they had even had a disagreement over the plating. Julia had but smiley faces on the plate and hadn’t wanted to take them off until Chef Ramsay warned her that it looked juvenile. And so there was a lot put in making sure tonight dinner service went off flawlessly.

The kids all got to taste dishes from both teams and a lot of them liked the fact that the Blue Team cut the steak, but they said it would have tasted better with sauce and so the winner tonight was the Red Team. The Red Team had cooked their meat more thoroughly and they rewarded for that by being exempted from the Pressure Test. The Blue Team, on the other hand, hadn’t been so lucky because they all knew why they had to cook in the Pressure Test. Their teammate Mark had been arrogant and the others had all been left angry with him because of what he did during the Fine Dining Challenge. They threw him under the bus before they even found out what they had to cook and so everyone made their feelings clear when they found out what waiting for them. The failed team were asked to cook cupcakes for their Pressure Test.

The judges brought in Christina Tosi to judge the cupcakes and she asked for perfection. She fell in love with sweets when she was first starting out and so she didn’t want to see one failed cupcake nor was she going to extend their timing. The home cooks weren’t given much to bake and decorate their cupcakes. That’s why most of them chose to go with something that was simple for them and so the only one that hadn’t wanted to do that was Mark. Mark wanted to do something fancy to impress Christina and that’s why he barely brought his cupcakes up in time to be judged. Luckily, that hadn’t been held against him and so the judges got down to judging. They tasted the many different flavors that people came up with like tiramisu, green tea, lemon méringue, lemon raspberry, and there was also a bourbon flavor thrown in.

Gerron had been the one to throw in some of his Kentucky flavors and unfortunately, that hadn’t worked out for him because his cupcakes hadn’t risen high enough. Except Gerron did receive some good news because, while Mark had come to the front in time, he hadn’t been able to fill out a box full of cupcakes like he had been ordered to. It was yet another mistake on Mark’s part and to make it worst Mark laughed during the judging. It could have been a nervous tick only the judges were already upset and so it was a good thing it was left to Christina. Christina had been the one given the final say on who should be eliminated and she hadn’t bothered to taste Mark’s because it had looked too unappealing. And so she ultimately chose to eliminate Mark because she could see from his time baking that he was just too arrogant to fully take instruction.

Mark needed some time to grow and it was clear he couldn’t do that with remaining on the show!