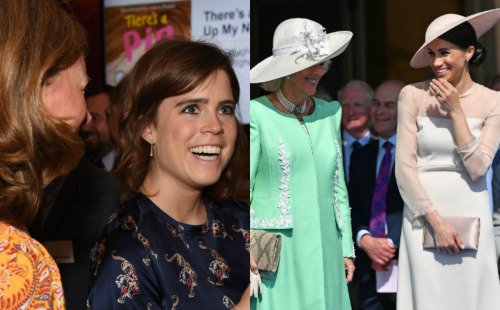 It looks like Meghan Markle and Princess Eugenie have sparked a surprising friendship together. According to new reports, the Duchess of Sussex is supposedly helping out Eugenie ahead of her royal wedding later this week. As a matter of fact, Eugenie reportedly paid a visit to Prince Harry and Meghan Markle last month to discuss her plans for her upcoming nuptials with her fiancé, Jack Brooksbank. Eugenie and Meghan got along so well that the former Hollywood actress is now helping her with her pre-wedding jitters.

Reports say that Meghan and Princess Eugenie have managed to form quite a strong bond, despite the fact that they’ve only known each other for a few short months now. Still, that hasn’t stopped Meghan from doing her best to comfort Eugenie as she prepares for what will be the most important day of her life. Seeing how Meghan herself just got married back in May, she knows just how Eugenie is feeling right now.

Princess Eugenie and Jack Brooksbank visited Prince Harry and Meghan Markle at their home near Chipping Norton in Oxfordshire over the summer. It’s a place where they can invite their visitors and meet with their friends and family in private.

One source close to the situation even told The Mail Online: “Princess Eugenie and her fiancé Jack Brooksbank made a trip to see the couple around a month ago for Meghan to help the bride-to-be with her wedding plans. Harry and Meghan have spent much of their summer at the house. It’s their safe haven and the reason they decided to get another dog as they love walking around the grounds.”

For a lot of royal critics, they are surprised to hear that Eugenie and Jack would make a trip to Oxfordshire to visit with Harry and Meghan. After all, it’s safe to say that both Princess Eugenie and her sister Princess Beatrice haven’t spent much time with Prince William and his wife, Kate Middleton, over the years. But with Harry and Meghan, things seem to be different.

In the meantime, don’t forget to check back with CDL for all the latest news on Prince Harry, Meghan Markle and the rest of the royal family right here.