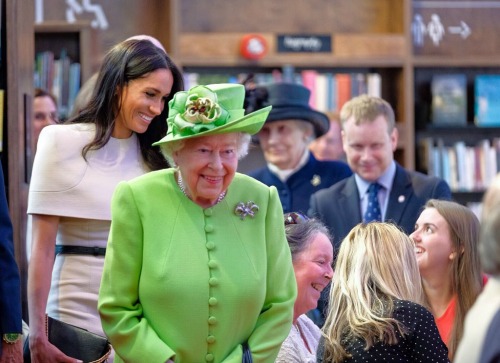 It seems as though Meghan Markle is influencing the British royal family in more ways than one. In fact, a lot of royal fans can’t help but wonder if Meghan might be behind Queen Elizabeth’s new rebellious streak as Her Majesty recently stepped out with some very quirky silver shoes on her feet.

As many royal fans know, Queen Elizabeth is not the kind of person who would ever break her own fashion rules. In fact, her wardrobe has been rather consistent over the years. And that might be the reason why a lot of people turned their heads in disbelief at the recent order of the Garter ceremony over the Queen’s very glamorous and sliver strappy shoes.

After all, Queen Elizabeth’s choice footwear has always been the black Anello & Davide patent leather shoes and matching shoulder bag that she wears on almost a daily basis. In fact, the Queen even wore them to Prince Harry and Meghan Markle’s royal wedding.

This time around Queen Elizabeth wore a silver pair of pointed T-bar bumps with a matching silver handbag. But seeing how Her Majesty has been spending more time with the new Duchess of Sussex lately, could this be Megan’s own chic style rubbing off on the Queen? One can only hope! After all, Meghan has been breaking plenty of fashion rules herself by wearing an off-the-shoulder dress as the Trooping of the Colors to an off-white nail polish color at a recent public engagement.

Prince Harry and Meghan Markle tied the knot in a lavish ceremony at Windosr Castle last month. In the meantime, let us know what you think by leaving us a line with your thoughts in our comments section below. And as always, don’t forget to check back with Celebrating the Soaps for all the latest news and updates on Prince Harry, Meghan Markle and the rest of the British royal family right here!