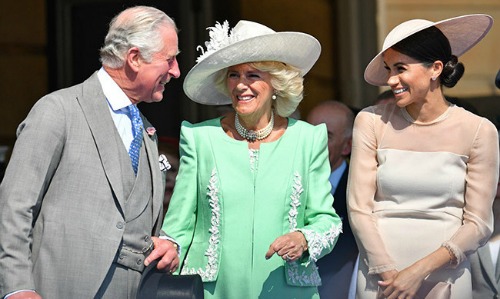 Meghan Markle has found a new father figure in Prince Charles. Apparently, the former Hollywood actress is a huge fan of the future King of England so much so that she looks up to him in more ways than one.

According to author and royalist Robert Jobson and his new book, Charles at Seventy: Thoughts, Hopes and Dreams, Meghan has become quite smitten with her new father-in-law and sees things in him that other people simply don’t see. Even though both Prince William and Prince Harry have always made headlines for being the stars of the royal family, Meghan thinks it’s Prince Charles who is the real prince charming of the firm.

As a matter of fact, Meghan could be the reason why Prince Charles now has a better relationship with Prince Harry than ever before. Robert Jobson writes in his book, “When Meghan met the Prince of Wales, she was bowled over by his gentlemanly charm. She told Prince Harry he was wonderful, welcoming, warm, hardworking, kind and stable.

She made it clear that he should appreciate him and bond more. She consulted him about the music for the wedding while Charles has taken time to discuss with her the intricacies of life in the firm.”

If that weren’t enough, the Duchess has distanced herself from her own father, Thomas Markle Sr., and the rest of the Markle family. She reportedly wants nothing to do with them. Both Thomas Markle and Meghan’s half-sister Samantha Markle have constantly tried to reach out to the Duchess on numerous occasions. Even though they claim that they want to repair their relationship with Meghan, they still continue to air their family’s dirty laundry to the press on almost a weekly basis.

Meghan Markle has definitely become Prince Charles’ number one fan. With that being said though, it doesn’t look like the Duchess of Sussex will be reaching out to her own father, Thomas Markle, anytime soon. She reportedly didn’t even call to notify him that she and Prince Harry are expecting their first child together.

At this point, Meghan Markle has made it pretty clear that she has a new father figure in her life, and that person is Prince Charles, and definitely not Thomas Markle anymore.

In the meantime, don’t forget to check back with CDL for all the latest news and updates on Prince Charles, Meghan Markle, and the rest of the royal family right here.