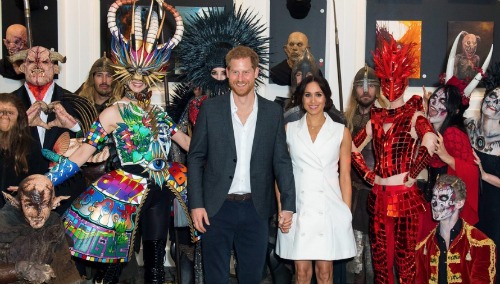 Prince Harry is separating himself from Prince William so that he can team up more with his wife, Meghan Markle. In fact, new reports indicate that Prince Harry is looking to have his own communications office and dedicated staff so that he and Meghan can work on their own royal engagements, charity events, and of course, issues that concern them the most.

Many royal observers are surprised by this move, as Prince William, Kate Middleton, Prince Harry and Meghan Markle were all being touted as the “the royal fab four” just a few short months ago. But that doesn’t seem to be the case anymore. Instead of working with William and Kate on joint projects, it looks like the Duke and Duchess of Sussex want to have their own office and a separate court behind the scenes at Kensington Palace after Meghan Markle gives birth.

According to Britain’s The Times, Prince William and Prince Harry are no longer relying on each other like they have in the past. That’s because they now have their own lives, marriages, and of course, future goals in mind. Apparently, William and Harry royal double act will soon be a thing of the past, as they reportedly want to split the Kensington Palace household and create two separate courts alongside their wives, Kate Middleton and Meghan Markle.

One source close to the situation told the publication, “The brothers have leant on each other and looked after each other since their mother died. But now they have their own families, they no longer rely on each other as before.”

Plus, there’s a very good chance that Prince Harry might see his wife, Meghan Markle, as not only a solid team member and partner for him, but also as a huge asset to the royal family. The Duke and Duchess of Sussex managed to impress crowds during their tour so far of Australia, Tonga, Fiji and New Zealand.

If that weren’t enough, Meghan also received rave reviews for her speech at the closing ceremony of the Invictus Games in Sydney. At this point, Harry might be wanting to work more alongside his wife than with his brother Prince William and Kate Middleton.

So far Kensington Palace has not made any comments about Prince William and Prince Harry’s plans to separate their communications offices. In the meantime, don’t forget to check back with CDL for all the latest news and updates on Prince Harry, Meghan Markle and the rest of the royal family right here.