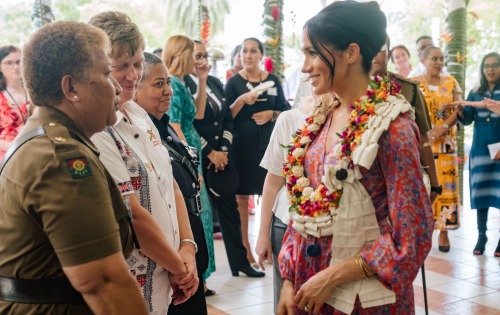 Meghan Markle’s trip to Fiji with her husband Prince Harry has been cut short due to security concerns. According to new reports, the Duchess of Sussex has become so popular that everyone is trying to get as up close and personal as possible with her. Authorities in the island’s capital of Suva did not expect the larger-than-expected crowds that wanted to meet her this week.

A Kensington Palace spokesperson has confirmed that Meghan, who is currently pregnant with her first royal child, will have to scale back her royal engagements and public appearances in the coming days. The palace said in a statement that her “engagement was shortened slightly due to crowd management issues.”

Eyewitnesses tell CNN that Meghan Markle met with members of the UN Markets of Change project before she was apparently whisked away by her security team. That’s because the crowd was growing in size so much that they were worried about her safety. Many locals cheered and sang and wave both British and American flags as both Harry and Meghan made their way through a market to greet vendors.

And while there have been plenty of royals who have made similar appearances, no one has ever had to cut their visit short because of security concerns. Both Prince William and Kate Middleton visited several Pacific islands as part of their tour back in 2012, but it was nothing like what Harry and Meghan are experiencing now. The Duke and Duchess of Sussex are so popular with their fans that they draw huge crowds wherever they go.

Earlier this week it was reported that the Duchess of Sussex was also forced to cut back on several of her engagements in Australia because of her pregnancy. Her demanding schedule, jet lag, and the changes going through her body right now had forced her to cancel a few pre-scheduled tours that she was supposed to go on with Harry. Prince Harry and Meghan will be visiting the island of Tonga and to New Zealand before heading back to Sydney, Australia for the closing ceremony of the Invictus Games.

So far Buckingham Palace has not made any additional comments about the Duke and Duchess of Sussex and their security concerns for the rest of the trip. In the meantime, don’t forget to check back with CDL for all the latest news and updates on Prince Harry, Meghan Markle’s pregnancy and the rest of the royal family right here.