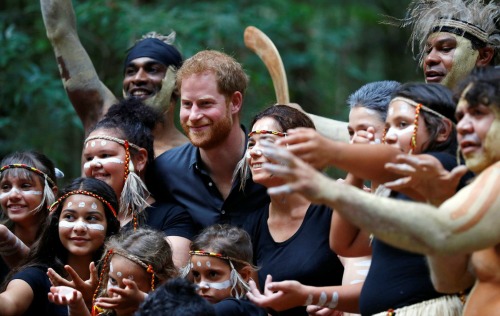 It looks like Meghan Markle is dealing with the first trimester blues. There are new reports that suggest the Duchess of Sussex is feeling rather sick because of her pregnancy and that’s why she has decided to scale back on some of her royal engagements and public appearances in Australia. The Duchess is currently touring the country and is expected to visit New Zealand, Tonga and Fiji in the coming weeks with her husband, Prince Harry.

Even though Meghan made quite an effort to keep up with Prince Harry and their demanding schedule during her first few days in Australia, she has finally decided to scale back on things. As a matter of fact, Meghan was forced to sit out on three engagements, including one to Fraser Island, which Prince Harry had to do on his own.

There has also been speculation that Meghan might be dealing with an extreme case of morning sickness the same way Kate Middleton did with her three pregnancies. But a royal aide close to the Duke and Duchess of Sussex claims that Meghan isn’t sick, but just tired from the traveling, her demanding schedule and of course, her pregnancy.

The aide told Britain’s Express.co.uk, “She isn’t sick, she just had a tiring few days and we were concerned about the roads on the island which are incredibly bumpy and uncomfortable for anyone, let alone a pregnant woman. But the duchess was very keen to re-join the Duke at the last engagement of the day to greet the people of the island.”

With that being said, Meghan is expected to make as many appearances at local charities and events as she can. In other words, she doesn’t plan on resting behind closed doors for several weeks the same way Kate Middleton did during her pregnancies. Instead, Meghan wants to do and see as much as she can and of course, support Prince Harry during the Invictus Games, which are being held in Sydney, Australia this week.

In addition to keeping things easy, Meghan has also been choosing comfort over style and has been seen switching from her high heel or platform shoes for flats instead. It’s safe to say at this point that Meghan continues to work all throughout her pregnancy, despite the few bumps in the road that she has so far experienced.

In the meantime, don’t forget to check back with CDL for all the latest news and updates on Meghan Markle’s pregnancy right here.