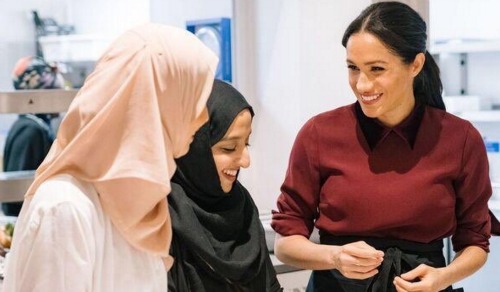 Meghan Markle avoids reading news stories about herself. Meghan believes that many of the articles about her are not true and “karma will get those who lie about her.” According to Daily Mail, Duchess of Sussex is aware of the negative press and believes some of the British media is out to get her.

This report comes on the heels of the rumor that she is feuding with Kate Middleton. Just recently, the Palace announced that Prince Harry and Meghan will move away from Kensington Palace to Windsor.

There have been several reports that Markle is difficult to work with, having multiple staff members quit after working for her for just a few months. The newest one to resign was Melissa Toubati, who reports claimed handed in her notice in tears. Melissa allegedly claimed she resigned due to the stress of the position.

The Palace released a rare statement quashing the rumor of the Kate Middleton and Meghan Markle feud according to The Sun. The Sun reports that Kate Middleton had to tell Meghan Markle to back off after Prince Harry’s wife took it upon herself to reprimand once of Kate’s staff! Another royal family insider claims that while there is no feud between the women, they do not get along very well and they have tension between them.

Another report came out that Meghan has been rough with the staff, appearing as a dictator. Apparently, many reports speculate that is what led to so many staff members quitting their jobs. A source that works closely with Meghan stated that Melissa Toubati’s position was a high-stress position, which she knew when she took the job, and the stress became too much for her. She only worked for Markle for six months.

“She put up with quite a lot. Meghan put a lot of demands on her and it ended up with her in tears,” the source stated.

Do you think it is a good idea that Meghan Markle avoids all news article about herself? How much credence do you give to the Palace denying a feud between Markle and Middleton? Don’t forget to come back to CDL for more royal news and updates!