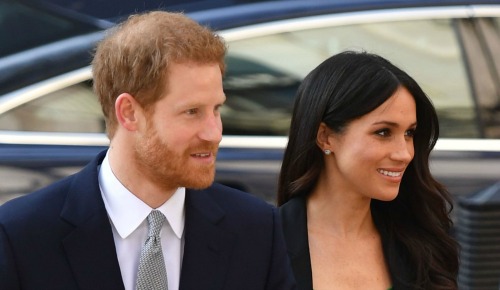 Prince Harry and Meghan Markle are not expecting twins. So far Buckingham Palace has not made any comments about bogus reports that indicate the Duke and Duchess of Sussex are starting their own family.

As a matter of fact, Harry and Meghan have a full schedule of royal engagements and public appearances on their calendar for the upcoming months. But that hasn’t stopped publications like Life & Style from suggesting that Harry and Meghan are already pregnant.

The site says that a palace insider confirmed the news and what’s more, said that the Duchess is pregnant with twin girls. A source supposedly told the magazine, “They have been busy drawing up a list of baby names, only for girls. Harry is over the moon! He let it slip to pals that double trouble lies ahead calling the twins ‘miracle babies,’ Harry has never been happier.”

And while both Harry and Meghan have made it no secret that they would love to start a family of their own in the future, many royal observers believe there’s a chance it will happen next year, in 2019. That’s because Meghan is still getting used to her new role as a member of the British royal family.

What’s more, they’ve only just gotten married back in May and are still in their honeymoon phase. It took Prince William and Kate Middleton two years after their marriage before they welcomed their first child, Prince George. Seeing how Prince Harry and Meghan Markle are very invested in their royal charities, the couple might take just as long before they decide to get pregnant, too.

With that being said though, many royal fans can’t wait to see Prince Harry in his new role as a father. The young royal has always felt very comfortable and at ease whenever he’s around children. There are several photos and videos available of Prince Harry playing, holding and teasing children like a natural father.

In addition, Meghan’s father Thomas Markle Senior has said that his daughter has been talking about wanting to start a family of her own for several years now. While no one knows exactly when Meghan Markle will get pregnant, one thing is for certain: Buckingham Palace will confirm the news before the tabloids.

In the meantime, don’t forget to check back with CDL for all the latest news and updates on Prince Harry, Meghan Markle, and the entire royal family right here.