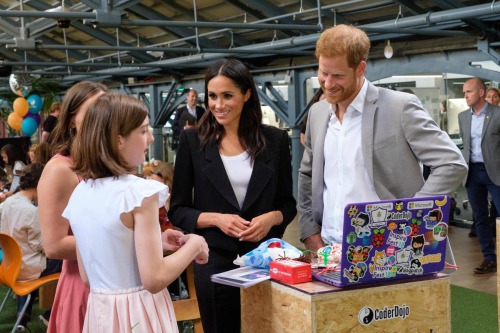 Meghan Markle’s past is slowly but surely coming out. In fact, one of her old classmates from her Catholic school days has just shared a letter that the former Hollywood actress had written to her from nearly 20 years ago.

The Duchess of Sussex sent Michelle Fanara a handwritten note while the two of them were attending Immaculate Heart High School in Los Angeles during the 1990s. The two weren’t especially close but according to Michelle, she says that Michelle reached out to her when her great-aunt died during her senior year. Meghan made quite an effort to reach out to her and show her support.

Michelle told Inside Edition in a new interview, “I wanted to retreat into my own shell, and Meghan was like, ‘No, no, no, you can’t do that. She kept pulling me out of my shell. To have someone reach out that’s not in your circle of friends … and say, ‘Hey, if you ever need anything, I am here for you,’ that is pretty special.”

Michelle added that the new member of the royal family was genuinely a nice person during her high school days and that Meghan didn’t have “a mean bone in her body.”

For a lot of royal critics and fans, this isn’t surprising. After all, Meghan did have plenty of her Hollywood friends attend her wedding to Prince Harry at Windsor Castle back in May. What she didn’t have though is her family. The only person that attended Harry and Meghan’s wedding was her mother, Doria Ragland.

This is mostly because Meghan’s extended family have been trashing her to the tabloids or anyone else willing to pay them a quick buck for an interview.

At this point, it’s safe to say that Meghan clearly values her friendships more than the relationships she has with some of her extended family members. While some people out there have tried to pain Meghan as a fame-hungry, ruthless B-list television actress, others see her as a compassionate, warm, and very caring friend.

And if there’s one person who sees that in Meghan, it’s Queen Elizabeth herself. The Queen has already proven that she enjoys having Meghan’s company as the two have gotten along quite well during their public appearances together.

In the meantime, don’t forget to check back with CDL for all the latest news and updates on Meghan Markle and the rest of the royal family right here.