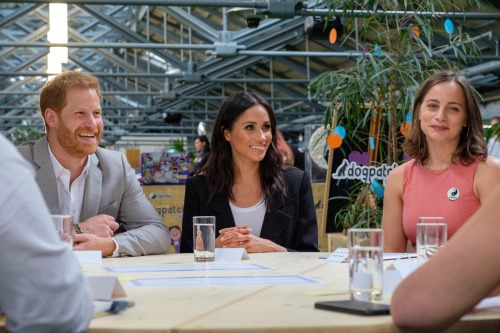 Meghan Markle is fast becoming Kate Middleton’s worst nightmare. That’s because many royal fans couldn’t help but notice that Meghan Markle was positioned at center stage and right next to Queen Elizabeth during the RAF centenary celebration on the Buckingham Palace balcony earlier this week. The Duchess of Cambridge, meanwhile, was left standing in the wings.

Critics noticed right away that Kate Middleton looked less than pleased to be standing so far away from Queen Elizabeth and the rest of the royals. That’s because the Queen had Meghan Markle by her side, followed by Prince Harry, Prince William, and then Kate Middleton at the very end.

The new Duchess of Sussex managed to steal the show in a navy dress by Christian Dior and a hat by royal milliner Stephen Jones. Kate, meanwhile, wore yet another one of her coat dresses by Alexander McQueen, a hat by Sean Barrett and a RAF brooch. Some critics have even said that Kate looked like she was stuck on the end as if she were the royal family’s hired help.

At this point, it’s safe to say that Kate Middleton has definitely noticed that Meghan Markle is giving her a good run for her money, at least when it comes to media attention. That’s because Meghan Mania has taken over, leaving the Duchess of Cambridge feeling as though she might already be yesterday’s news.

Meghan might also be one of the reasons why Kate Middleton decided to attend the event. Even though Kate only gave birth to her son Prince Louis back in April, she’s been making public appearances in hopes that she can make her way back to the limelight. Unfortunately, Kate is going to have to work much harder.

It’s pretty clear that Queen Elizabeth enjoys Meghan Markle’s company and that there might be a reason why she had her stand next to her, rather than Kate Middleton. Seeing how the Duchess of Cambridge is married to Prince William, who one day will be the King of England, this doesn’t make much sense.

But at the same time, it does look like Meghan has done a great job of winning the Queen over with her charm, intelligence, and warm personality. Clearly, Kate doesn’t look very happy about being ignored at all.

In the meantime, don’t forget to check back with CDL for all the latest news and updates on Meghan Markle, Kate Middleton and the rest of the royal family right here.