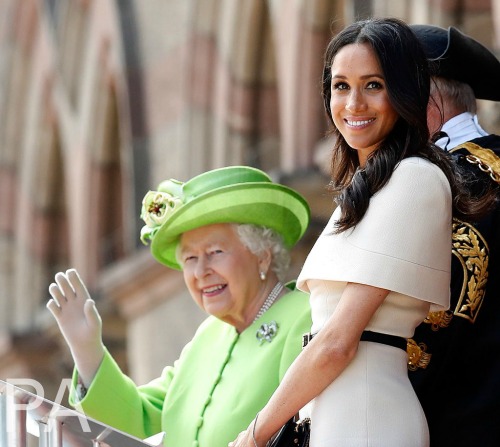 There’s a new report that says Meghan Markle is to undertake a Balmoral Test during her upcoming visit to the Scottish estate. It will be the Duke and Duchess of Sussex’s first visit to the Queen’s Scottish estate at the country retreat since their royal wedding back in May.

The last time Prince Harry and Meghan Markle were in Balmoral was back in September of last year. This time around though Meghan will be spending much more time with Queen Elizabeth, as she continues to transition in her new life as a member of the royal family.

The first Balmoral initiation of a spouse who wasn’t a royal was when Prince Charles brought his new wife Princess Diana to the Scottish estate. Unfortunately, Diana reportedly wasn’t very happy during her visit.

Royal expert Richard Fitzwilliams recently told Britain’s Express, “An invitation to Balmoral, where the Queen is expected to remain until September, is traditionally part of the initiation into the Royal family. The Balmoral ‘test’ was initially passed by Diana who was later unhappy and bored there.”

Royal critics believe that Meghan Markle might have a different approach to Balmoral than Princess Diana did several decades ago. After all, she already has a better relationship with Queen Elizabeth and for the most part has been accepted quite well into the royal family. Harry first introduced his then fiancé Meghan to the Queen at Balmoral last year.

Richard Fitzwilliams added, “Meghan’s relations with the Queen are excellent especially after the success of their joint visit to Cheshire in June and the omens are extremely propitious for a highly successful visit.”

Balmoral Castle is actually quite an important place for Prince Harry, as it was where both he and his brother Prince William stayed following the untimely death of Princess Diana back in 1997. It’s also where Queen Elizabeth feels her best, as she uses the historic castle as her summer retreat from mid-July until the first week of October.

Seeing how Meghan Markle has already passed a few tests, many royal fans and critics alike believe that she will continue to charm the Queen and the rest of the royal family during her visit to Balmoral, too.

So far Buckingham Palace has not made any comments about Meghan’s upcoming visit or what she can expect for that matter. In the meantime, don’t forget to check back with CDL for all the latest news and updates on Prince Harry, Meghan Markle and the rest of the royal family right here.