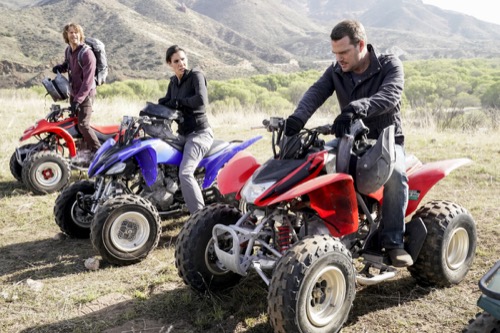 Tonight on CBS NCIS: Los Angeles returns with an all-new Sunday, September 30, 2018, season 10 episode 1 premiere called, “To Live and Die in Mexico” and we have your weekly NCIS: Los Angeles recap below. On tonight’s NCIS Los Angeles episode, as per the CBS synopsis, “The Season 10 premiere: Gravely injured and unable to communicate with the team in the U.S., Callen, Sam and Kensi, with an unconscious Deeks in tow, search for a safe way home as a cartel boss places a “dead or alive” bounty on their heads. Also, Mosely and retired Navy Admiral Hollace Kilbride beseech their contacts in Mexico and D.C. for assistance with their missing colleagues.”

The team found themselves in such a situation because they had gone to Mexico. It wasn’t an official trip and so they hadn’t had any sort of backup when they decided to go a town rife with corruption however they all felt they had to go because it was for EAD Mosley. Mosley had lost her son after her ex kidnapped him and fled. She had had no idea where her son was taken until she had gotten a tip off and had traced it down to the small town. Mosley had wanted to go down there herself and just grab her son, so the only way the team could talk her out of that was by saying they could get him. They promised to rescue Derrick and bring him to her. Mosley had said she trusted them and she allowed them to go to Mexico. And while they were down there they realized rescuing the boy was going to be a battle.

Derrick’s father was an arms dealer. He even had the Mexican military working for him and so they acted as a backup when people at the compound realized someone was trying to break in. The story the team had used was that they were horse trainers and that they were there to give Derrick a pony ride but that story only works if his father wasn’t in residence and unfortunately he was. He saw that they were trying to get into his home and he called for backup. The military was arriving by the time the team managed to find Derrick and get him off the compound. They were trying to take him back to a chopper when the kid put a fight. He hadn’t known any of them and he wanted to go home to be with his dad because that’s where he felt safe. Derrick began resisting and he would have refused to go on the helicopter if his mother hadn’t been there.

Mosley hadn’t been able to help herself. She flew down with the exit helicopter and seeing her had been enough to reassure Derrick that it was safe because he remembered his mother. Mosley had taken her son to the chopper and she wanted the team to come with yet they had to turn down the offer because they hadn’t gotten everyone. They had left two of their own behind because they placed getting Derrick out as their priority and so Mosley was forced to leave them behind. She knew she could arrange for another helicopter to come to get them while she got her son to the nearest airport and so she left them. And that came back to bite her when she had to answer for it with the man running their unit back in LA – former Navy Admiral Hollace Kilbride. Kilbride had gotten called in by Hetty and then Hetty did a runner. So he suddenly decided to be in charge!

Kilbride had found out about the mission and what happened to the team after Mosley left. Therefore, he informed her what happened. How the team had never made it to the helicopter because their car had gotten by a rocket launcher and that odds were that all four were dead however he wanted to definitely if they were dead. He ordered Mosley to return to the scene to confirm things and he had given her enough time to settle things with her son before she next had to report in. Only Killbride had been angry. He thought that the team was dead and that five agents might have gone on suicide missions just to appease Mosley. Mosley was the one he blamed and so it was good thing Hetty wasn’t around because Kilbride might have made certain calls to ensure she got her job back meanwhile Mosley would have been shown the door.

But the team hadn’t been like poor Hidoko. They had survived the rocket launcher and had managed to escape the cartel thanks to Hetty. Hetty had made a few calls to people that owe her a favor and one of them got the four agents out of harm’s way. They eventually had to split up to better their chances and so Sam went with Callen while Kensi took Deeks. Deeks hadn’t woken up like the others and for a while that had scared Kensi yet, she had kept her hopes up until he did awake and together they thought they met a good Samaritan. Some guy driving around on a motorbike had offered them a lift to the hospital and he said they just had to wait for his wife to come with the car. Neither Kensi nor Deeks should have trusted him only they gave him the benefit of the doubt and it turns out his wife had come with the car.

They said they were going to take the couple to the hospital when the truth was they were going to take them back to the compound because someone placed a high price on their heads but Kensi and Deeks managed to take out the married couple and they even stole the car. So they were able to make it to the hospital and they found out saw did Sam and Callen. The guys had met a young boy and the boy’s family had been real Samaritans who brought them to the hospital. The team knew that they couldn’t stay in one place for too long and they were working out a way to medevac everyone out of there when the cartel arrived. They were going to come in and kill everyone though before they could, Mosley had returned and she killed her ex. And once the hitmen knew that there was no left to pay them they decided to leave.

So Mosley had saved the team and Hetty had come through with getting everyone out of there with one of the many favors she called in.

And so the only one that wasn’t happy was Kilbride because he had to inform Hidoko’s family about what happened to her. He could have left that job to Mosley only he hadn’t wanted her anywhere near the grieving family and his problems with the EAD weren’t suddenly over because the rest of her team was rescued. Kilbride knew that Mosley was happy that she had gotten her son and he suspected that she had been the one to kill her ex, so he asked if she knew the cost of her actions and she did. Either she ends up getting fired or she’ll be severely demoted.