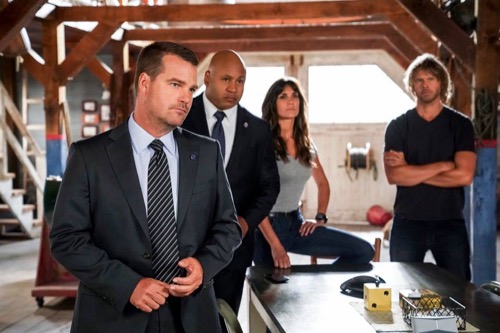 Tonight on CBS NCIS: Los Angeles returns with an all-new Sunday, October 14, 2018, season 10 episode 3 called, “The Prince” and we have your weekly NCIS: Los Angeles recap below. On tonight’s NCIS Los Angeles episode, as per the CBS synopsis, “Callen and Sam are assigned protection duty for Deputy Crown Prince Kamal after an unknown assassin targets his decoy upon his arrival in Los Angeles.”

The team was on their own with this latest case on tonight’s all-new episode of “NCIS: Los Angeles”.

Admiral Kilbride flew back to DC. The team didn’t know why he left town or whether it had something to do with Hetty and Mosley and so they decided to focus on what’s in front of them. In this case! They were informed that a threat was made on someone’s life. The person that was being threatened was Deputy Crown Prince Kamal of Saudi Arabia and the only reason he’s alive is that he had a decoy travel his route to the hotel. The assassin had gotten close enough to this decoy to know he wasn’t the real thing and so that’s why they hadn’t shot the decoy when they had the chance. The assassin also hadn’t killed anyone on the prince’s security team and that had been unusual. It states that whoever was making the threat was focused on one goal and didn’t want to hurt anyone else.

The team thought the threat to the prince was serious and they had some questions. They wanted to know why the prince hadn’t simply gotten back on his private plane when the threat to his life proved credible, they wanted to know why the prince hadn’t changed his plans seeing as he wanted to stay his full vacation, and lastly they wanted to know how someone had gotten their hands on his travel schedule. The assassin had known which route the State Department was going to be taking and that might mean there was a leak. Naturally, the State Department denied the allegation. They said nothing could have come from their camp and mentioned that all the plans had been made by the prince himself. The prince was in town because his country was finally ready to open the doors to Hollywood.

Saudi Arabia had a reputation that the prince wanted to change. Prince Kamal wanted to bring in investment and the only way he could that was by setting up several meetings. He was meeting people from every corner of the film industry and he had brought along a large entourage, however, the team wanted to know why the prince was getting to make all the calls with the State Department. Agent Brian Bush was the same man that had forcibly taken Callen’s father from him and, despite that, Callen still believed Bush wouldn’t have played so fast with one of his charges. So the guys asked Bush what was going on and Bush admitted that he couldn’t take the lead with the prince. Prince Kamal was a wealthy billionaire and his country had control over vast amounts of oil. And so the prince got to do decide what happened and what the guys wore.

Sam and Callen had been outfitted for suits. The prince said he wanted his protection team to be fashionable and he hadn’t liked the guy’s casual attire because he said he couldn’t be seen with guys that worse those clothes, but the guys went ahead with wearing the suits and they hadn’t minded it too much. What did bug them, however, was the prince’s attitude. He seemed fine with people trying to kill him and so they asked why that was. The prince said that his brother, his father, and various members of his family had been assassinated. It didn’t even surprise him that someone to kill him now as well. He said if it was meant to be then it will happen and until then he was going to keep living his life. The prince continued with all of his business meetings and the guys had gone along with his plan because they knew the members of their team were already looking into the assassin.

Kensi and Deeks had been following leads and they were lead to a motel where they found someone strapped to a chair. The person that was being held was a masseuse. She had taken a job when someone drugged her and tied her up. The person that did this also took her massage chair and so they asked this woman if she had any other clients for the day. It turns out she had been called by someone in the prince’s entourage and so the duo called the guys to warn about a woman dressed as a masseuse. The guys later spotted her before she could get to the prince and they chased her before she ultimately got away. Only they had seen this woman’s face and so they knew who she was. It was Joelle! As in Callen’s ex who was a former CIA Agent that used him and then needed his help.

The last time the guys saw Joelle they had been helping her fake her death. It was done to protect her family and they thought that would be the last time they ever saw her, except here she was again and the guys didn’t know why. She was last looking into an organization called the Syndicate. The Syndicate were a bunch of rogue agents that were operating without a country and they were dangerous. Joelle had been so frightened of them that she moved her family and faked her own death to make sure that there wouldn’t be in danger though why she was back in town was something Joelle eventually decided to answer for herself. She later showed up at the boathouse and she told them what she found. She had made a connection between the Syndicate and a company called 2GS.

The company was a front for shady business deals and assassinations. It was 2GS that wanted to kill the prince and it was Joelle stopping them. She said that’s why she went after the decoy. Joelle said she knew the decoy was a fake the whole time and that she only did what she did because she wanted to scare the prince into leaving the country. Joelle said that she had a source inside 2GS that was willing to come forward and that until her course could testify that she needed to keep the prince alive. She also added that she could identify the real rogue agents that wanted to kill Prince Kamal and so she was willing to work with NCIS. It was NCIS that hadn’t been sure about her. Joelle had burned a lot of bridges with the team and no one else had even known that she was still alive. The guys had kept it from the others and were forced to defend their actions when the truth came out.

Joelle apologized to people she offended and learned to speak respectively to Nell once Nell pulled a gun on her. So Joelle was later trusted enough that she went out in the field to help the guys. She said she could ID the real assassin and so she was with Callen when they were moving the prince. Prince Kamal had been convinced about his safety and he was going home, but before he did, a rogue CIA agent tried to kill him and it had been Joelle that stopped her. The woman was a few years behind Joelle and Joelle said she never liked her.

Nevertheless, Joelle did as she said she would and she saved the prince’s life.

She had done such a good job that the team thought Joelle could go home now. They said the Syndicate would have heard about her being back and Joelle agreed with them however she didn’t want to go back home.

Joelle didn’t want to face her family and explain what happened, so she chose to run away and this time no one stopped her.