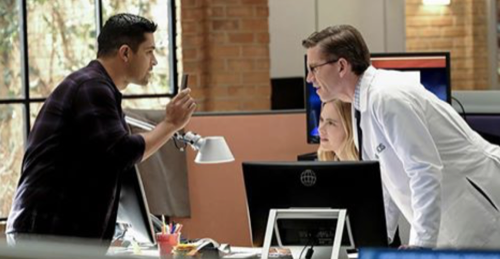 Tonight on CBS NCIS returns with an all-new Tuesday, January 9, 2018, season 15 episode 12 called, “Dark Secrets” and we have your weekly NCIS recap below. On tonight’s NCIS season 15 episode 12, as per the CBS synopsis, “After a seemingly happy and successful Navy lieutenant appears to have taken her own life, Gibbs and the team conduct a thorough investigation, interviewing family and friends from her past and present.”

The team got a call about a dead JAG officer on tonight’s all-new episode, however, the parents of the victim didn’t believe Lt. Melissa Newhall’s death was suicide. She had been found hanging from the ceiling by her distraught parents and, despite the circumstances in which they found her, they were sure to tell NCIS when they saw them that their daughter didn’t kill herself. They said they talked to their daughter almost every day and she had been happy. Melissa had recently got engaged to her boyfriend David Crocker and so the team knew that they should talk to him about her in case he noticed something her parents wouldn’t be aware of.

Except David on a business trip that same morning and so that had made them all little suspicious, but what had made David’s trip a little too convenient had been what they’d seen in their report on the preliminary autopsy. The report stated that Melissa had been covered in bruises and often in abuse cases, the culprit is either the spouse or the boyfriend. So the team continued to reach out to David until he eventually got in contact with them and agreed to an interview. David hadn’t known that anything was wrong and hadn’t therefore been on his guard when he was questioned about Melissa’s bruises.

David, though, had no knowledge of these bruises or so he claims. He said that Melissa believed in waiting until they were married so they were celibate and while it hadn’t seemed like it was making it up it sure didn’t explain why Melissa hadn’t actually been celibate. She had had sex within three days of her death and so if David wasn’t her partner then who was? The team reached out to Melissa’s best friend to find out if Melissa had any exes she might not have gotten over and the friend told them that Melissa didn’t really have exes. She said Melissa had never truly dated and that she hadn’t cared about dating until she met David.

Therefore, none of what they found was making any sort of sense. They were investigating the suicide of a JAG lawyer that always seemed to look on the positive side and never had a bad thing to say in her video journal that she was holding onto for five years. Just this Melissa that the team kept hearing about didn’t actually seem to exist. She had a burner phone in her house and it belonged to her other persona. Melissa liked to go out on the town as Rita and she constantly sought out men that could beat her part of some extreme S&M. So Sloane was brought in to help them understand what happened to Melissa.

Melissa led this secret life and no one in her inner circle knew about it. Her best friend had even been left speechless when she was heard that Melissa hid this other side to herself because she thought Melissa had told her everything, yet with that no longer being the case, Kerry had to wonder if she really did know Melissa or will she be mourning the woman she thought Melissa was and so she asked NCIS not to tell Melissa’s parents what they found. She said that she was still Melissa’s best friend and that she had to protect her memory especially in regard to Melissa’s parents. Their daughter had been their whole world and so she didn’t want to take that from them.

Only that wasn’t a promise that NCIS could keep. They were running an open investigation and would need to inform everyone in Melissa’s life what she had been up to if they were ever going to get answers. So they talked to her parents without revealing too much and they admitted that Melissa kept a diary when she was a teenager. Her father said that Melissa had gone through a drastic change in high school and that he had tried to read her diary when she walked in before he found find anything. And so they asked David if he knew where Melissa’s hiding place was, he did and led them right to her diary.

It turns out Melissa had written in her diary about her teacher Mr. Paul and how she was going to teach him a lesson with her best friend Kerry. But they looked into this Mr. Paul and they found out his body had just been found buried in a ditch, but that wasn’t all of what they found. They also learned that girls started coming forwards after he disappeared and that the girls revealed that their teacher had molested them. So Sloane put the rest together. She figured Melissa really did kill herself because now that Mr. Paul’s body was found she thought her secrets, both new and old, would come out.

The secrets that Kerry would eventually tell them were this: Mr. Paul had molested them and they lured him out in the wood hoping to get him to confess on tape. Except Paul had a heart attack and died while they had him tied up so they panicked. They buried his body and never talked about it again. So when his body was found, Kerry called Melissa to tell her and Melissa freaked out believing her life was over. And just hearing it in her friend’s voice, Kerry rushed over to Melissa’s and found her friend had killed herself.

Melissa had left behind a suicide note saying goodbye and she also said why she killed herself so Kerry had taken that note before she left because she was in sheer panic mode.

Luckily for her, Kerry had kept the note and she had later handed it over knowing she would also have to answer to Pennsylvania police about Mr. Paul.