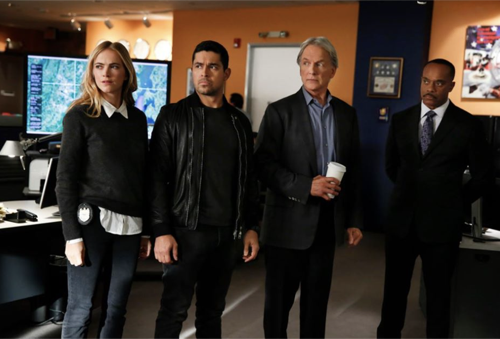 Tonight on CBS NCIS returns with an all-new Tuesday, December 04, 2018, season 16 episode 9 called, “Tailing Angie” and we have your weekly NCIS recap below. On tonight’s NCIS season 16 episode 9, “Tailing Angie,” as per the CBS synopsis, “The lead suspect of an unsolved and high-profile robbery case is released from prison, and the NCIS team resumes their investigation with an undercover stakeout”

A home security system picked out a couple of thieves on tonight’s all-new episode of “NCIS”. The thieves had broken into the home of Admiral Norton Padgett and stole several important documents. The documents were worth thousands, but as the security system led to the identification and later arrest of Angie Gray, she refused to say whatever happened to those documents nor she did name her accomplice. She chose to protect her partner and went to jail for three years. Angie was released after her sentence and the team thought they had finally gotten their chance to find out the name of the accomplice.

NCIS planned on following Angie until they got what they needed, however, Angie was giving them a run for their money. They followed her from the prison to a brand new apartment she rented and they noticed something that was off. They noticed that there was someone else that following Angie. It was an older guy and he was carrying a weapon. He wasn’t part of Angie’s known acquaintances and so they did some digging. They found the man following her was a Private Detective. He was hired to follow Angie and the team had a suspicion about who was behind it. They suspected that the Admiral had taken things into his own hands.

Admiral Padgett was a wealthy man. His wife had a trust fund and it allowed the couple to live a lavish lifestyle, so eventually, Padgett got used to doing this his way. He had tried to insert himself into the investigation three years ago when Angie was first arrested and he demanded to be included into the current one as well because he wanted to know how far the team had gotten. Every effort was being made to respect Padgett’s position and so of course he was would use that against them. The team thought he was following Angie because he wanted to get answers out of her using his own methods and therefore they had been surprised when the PI acted a little off.

The PI had gone into Angie’s room the same time as she died and he left moments after she did. It would have been nearly impossible for her to not see him and so the NCIS agents wanted to know what happened in that room. They had questions though they also didn’t want to risk their cover. They still wanted to follow Angie to see who she met and they identified one of her friends. The friend was Lanny Peete. She had served time with Angie and the two stayed close after they had both been released. This Lanny woman was the only one that had maintained a presence in Angie’s life and so they brought her in to question her.

They asked Lanny about Angie. Angie was described as a good person who’s the only mistake was to fall for guys that always disappointed her. It was how Angie got into trouble. She apparently met a guy named J.T. who promised to wait for her and then ran away at the first opportunity. He was the reason Angie never said anything and so Lanny didn’t care what happened to him. She shared what she knew with NCIS and, while it wasn’t much, it was still something. The team went back to following Angie and they got the PI off her back. Gibbs had gone to speak with the other man to find out who hired him and the PI refused to say.

He said he wanted to maintain his client’s privacy. He also wasn’t going to fall for whatever trap that Gibbs tried to drop in and so Gibbs just kept him talking until Angie got away. The team needed where she would go and they didn’t want the PI ruining things. They followed Angie as she met up with Lanny and the two women went on to travel to a cabin miles away from anything. The agents following them would have waited in their car without being seen, but they heard Angie’s scream and so they had to go in. They wanted to check out the scene and were just as shocked as Angie when they found a body.

The body had been old. It could have been there for years without anyone knowing and so the team believed, like Angie, that the body was J.T. The body was moved to the lab yet the team thought they had a lead. They had been tracking Angie’s phone calls and she called Lew Nolte. Nolte had worked for the admiral and he had been a suspect as well in the robbery. The team thought that Nolte was an “inside man” because he was the only one that would have known that both the housekeeper and the cook were off that night. They had also questioned Nolte and he had denied all of the charges. He said he had nothing to do with the robbery back then and fast-forward to the present and he was still claiming innocence.

Nolte claimed he had never met Angie and that he didn’t know who J.T. was or had anything to do with the body the team found. The others had been forced to let Nolte go only that didn’t stop them from trying to find proof that connected Nolte to the crime and so they figured their best bet would be to identify the body. The body was later proven to be John Storevelle. His picture was shown to Angie and she said that was her boyfriend J.T. She also said that she knew that her boyfriend would never have run away and it turns out that he did. He took the money and went to the islands. He lived it up down there and blew through the money.

JT had been broke when he came back to the states and started talking odd jobs. The team believed he could have tried looking for another place to rob when he got killed and so they asked Angie about Nolte. Only Nolte was just a name to Angie. She said she got desperate when she couldn’t reach JT and that she called Nolte because she remembered hearing that he was a suspect. She thought that Nolte could lead her to JT and the truth was he might not even have anything to do with the crime. And another thing the team learned was that the PI was, in fact, working for Admiral Padgett.

It was a confirmation to the team and it got McGee thinking. He said that the whole situation felt like ‘Murder on the Orient Express’. He said they had plenty of suspects and couldn’t figure out who did the crime because they all had good motives. The book and eventually movie revealed that all the suspects had killed the victim together and so that led to the team forming a plan. They brought in Angie and told her what they knew, and then they asked her for help. She wasn’t protecting anyone by keeping quiet anymore and so she was willing to help. Angie went to Nolte’s apartment wearing a wire and she found out everything.

She threatened him and it got Nolte talking. He had been working with JT and the guys had split the money, but then Nolte had found pictures of the admiral that would have ended his lucrative marriage and so he chose to blackmail him. JT didn’t see the benefit of that until he ran out of money and needed more. He came back and he demanded a cut of the blackmail money. JT thought he was owed it and so Nolte killed him in order to keep all of the money to himself.

Nolte confessed to everything over the wire and so the team was finally able to arrest him for the part he played in the robbery as well as the blackmail and JT’s murder.

And Angie finally realized that she did waste three years protecting that just wasn’t worth it.