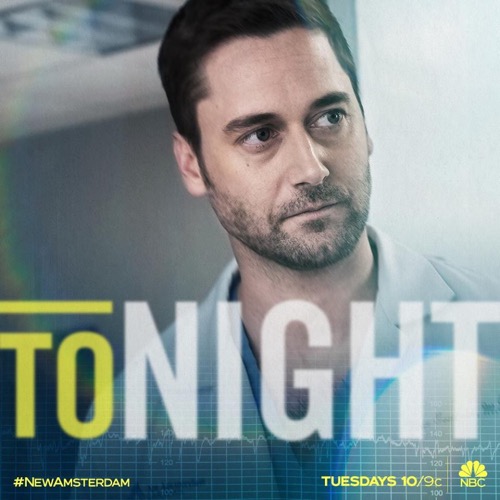 Tonight on NBC New Amsterdam premiere with an all-new Tuesday, October 23, 2018, season 1 episode 5 called, “Cavitation,” and we have your New Amsterdam recap below. On tonight’s New Amsterdam episode as per the NBC synopsis, “A journalist visits New Amsterdam to shadow Max and learn about the hospital; Bloom and Reynolds have a major disagreement after she makes a call against protocol; and Kapoor deals with issues from his past.”

Max reads a newspaper clipping to the staff, yesterday at 7:30 am, a bullet ripped through New Amsterdam.

24 hours earlier – Max walks through the hospital with Helen when Dora finds him and tells him he is going to be shadowed by Lou, from HCC for the day. Dr. Kapoor is notified that someone is at the hospital to see him, it’s his son, he looks surprised.

Helen gets bad news, she has diminished ovaries reserved, its just the cards she was dealt. If she wants her own biological child, she has to start on that now, or freeze embryos.

Max compliments Lou on some work that he wrote. Lou wants to talk about Max’s story, about how he got to New Amsterdam.

In emergency, a 14-year-old boy comes in and there is blood everywhere, his mother is hysterical, they usher her out of the room. A 17-year-old comes in and he has a bullet wound as well. The first boy is critical, Dr. Bloom will have to perform a procedure that is out of protocol to save the boys life as there is nobody available to help. All of a sudden there is blood everywhere. Dr. Reynolds shouts at Dr. Bloom, he is upset and tells her that she is not a cardiac surgeon and she better hope he can fix what she did wrong.

Ms. Tukes, the mother of one of the boys is being questioned by police when Dr. Frome comes to her rescue and assures her that he is in the best hands.

Dr. Kapoor is outside sitting with his son on a park bench, he asks him if he needs any money. He says no, he has a job. Dr. Kapoor tells him that he forgives him, his son says fine, his sponsor told him to have no expectations. His son starts to shout at him that he thought that he would change after her death but he has not, he is still stubborn.

Lou knows about the breach of protocol, he asks Max if he wants to comment. Dora tells Max that the mayor wants to talk Max, he wants to know about Malik’s injuries and what kind of bullet was used. Lou asks Max if knows why the mayor would want that information and Max basically tells him it is not his business.

Laura is upset about the whole protocol thing and confides in Helen. In surgery, the boys are not doing well.

Dr. Fromme is stress eating from the vending machine when Max walks in. He says that today it is these two boys, tomorrow it will be another two or the same again. Dr. Frome seems more so focused on Malik and Max is surprised. In surgery, Malik is in danger, the bleeding is very bad but they have finally figured where it is coming from.

One of the boys’ brother comes in and he is very upset because the cops won’t tell him how his bother is. Max tries to calm the boy down and assure him that he can give him info but he hits Max and the cops apprehend him.

Dr. Frome speaks to Malik’s aunt and tries to console her, he tells her that she is suffering from PTSD. Then he goes on to tell her about his children that he adopted from Bangladesh and how they also suffered from PTSD.

Malik is going to pull through, as well as the other boy. Meanwhile, the boy who hit Max apologizes, he says he didn’t mean to do anything, he was just worried. Max offers to take him to see his brother, tells him the surgery went well and he is going to be ok. Sadly, the boy goes into cardiac arrest and doesn’t make it after all. Max tries to save him by doing chest compressions, Dr. Kapoor has to tell him to stop, it’s over.

It turns out that Max is the one who wanted Lou to shadow him, he wanted him to write the truth.

Floyd tells Laura that in the end, she did the right thing.

Max continues to read the article in the paper about the shooting, it basically says that all the doctors of New Amsterdam did their jobs and nobody is to blame for the boy’s death.

Helen tells Max that his cancer didn’t spread. Helen goes on to tell him about her baby problems and tells him that she doesn’t even know why she would want to bring a brown child into the world. Max says there is one thing, hope.