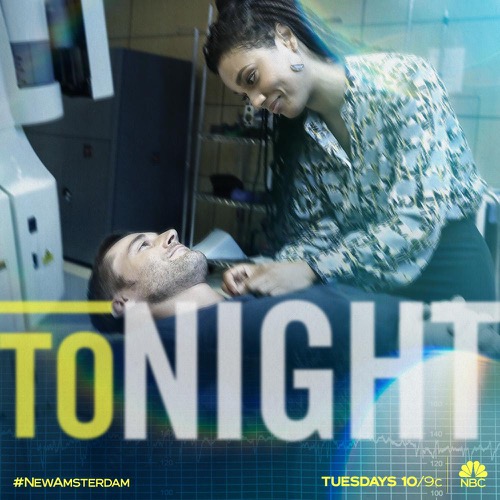 Tonight on NBC New Amsterdam premiere with an all-new Tuesday, November 20, 2018, season 1 episode 8 called, “Three Dots,” and we have your New Amsterdam recap below. On tonight’s New Amsterdam episode as per the NBC synopsis, “A patient’s treatment plan takes an unexpected turn when Max gets overly invested. Meanwhile, Reynolds celebrates his birthday with some help from the hospital and Kapoor grapples with a case that hits close to home.”

Max is getting a treatment done by Helen, she asks him when he is going to tell the staff. He is going to be vomiting and lose weight, people will notice.

An ambulance comes in, but it is Laura who gets out as she arrives for her shift.

Max comes out of the elevator and sees Floyd trying to move a huge cell sorting machine. Floyd doesn’t know how it got there, but he wants to get it into the OR. Unfortunately, the lift it is on is broken and it can’t be moved.

Anil is walking with Rohan, they chat a bit, then Anil gets a call and leaves.

Anil is with his patient Amy and her mother. He tells her that they have exhausted all treatments and perhaps Amy should seek counseling for her migraines. Amy’s mother doesn’t like it, she tells Amy that Anil thinks she is crazy. Amy and her mother leave the hospital and are in a subway when Amy walks right in front of the subway as her mother screams.

Amy is brought in to emergency with her distraught mother. Laura is there and she is told that Amy was already in the hospital later in the day to see Anil.

Floyd gets his machine in the OR and tells Evie it is the best birthday present ever. Then, Floyd comes around and finds out that the machine has the wrong connector and is useless.

Max and Helen are talking about the rabbi and they disagree on which choice he should take.

Max goes to see the rabbi and he says he is not doing the surgery because it is too risky. Max tells him to take more time, speak to his family and his congregation. The rabbi says that he accepts his faith, Helen lets him know that they are going to give him all the support he needs.

[2018-11-20, 11:11:34 PM] Rosie LeBlanc: Iggy speaks to Amy’s mother and tells her that they want to give her psychiatric care when she is out because she jumped in front of a train. She tells Iggy that her daughter didn’t jump, she slipped.

Laura is clearly tired and makes a mistake on a med, but she denies she made a mistake and is taking pills to keep her alert.

Laura dozed off and starts hallucinating. She goes to see her patient Roger who suffered hypertension, she tells his wife that he will have to stay over night. Laura goes to lie down and get a rest. Evie tells Laura that she is going to throw a surprise party for Floyd.

Laura literally puts her head down for one minute and gets interrupted.

Iggy goes to see Amy and tells her that she is very lucky to be alive. He goes over her symptoms before her accident and tells her she is suffering from depression and the good news, it is highly treatable. Amy doesn’t want her mom or dad to find out because they will think she is weak. Iggy wants her to talk things out, he thinks it will be better for her, but she won’t, she says her parents would be against it, they would think she was telling family secrets and they would find out because she is on her parent’s insurance.

Iggy speaks to Max, he wants to help Amy but can’t because of stupid insurance forms. Max tells him to down code it to help the patient.

Helen asks Max what he told the rabbi, he has now changed his mind and is going ahead with the risky surgery.

Max goes to see the rabbi and asks if his talk changed his mind. the rabbi says no, he makes his own decisions.

Floyd’s cell sorter is in the hall, Max tells him to get HCC to take it back.
Billing approaches Max and tells him that two of his doctors are down coding, one is for Amy. Max tells her that he told them to do it, she tells him that he will have to cover the cost.

Iggy goes to see Amy and tells her about the down coding, she says that it is a lie. Amy is against it, her mother will judge her and won’t love her the same. Amy asks him what will be the coping mechanism for that.

Iggy speaks to Anil and tells him that Amy’s lying is only going to cause her stress. Iggy suggests they bring her mother in and talk to her or else they are going to lose Amy.

Laura is sleeping and called to help Mr. Conaway and she freezes, but then manages to come through with meds she subscribes for him without having to shock him.

Iggy speaks to Amy’s mother to try to get her to understand that they have to do everything to save her.

Max speaks to the rabbi’s wife, she tells him that her husband had to explore everything about the surgery to decide.

Iggy speaks to Amy, he tells her that he understands that she cares what her family thinks. Amy says the hardest part of every day is just getting out of bed. She lays there thinking about all the things she has to get done and one by one, she fails at everything. She doesn’t finish her schoolwork, she is late for work, she says the wrong thing at home. So she lays there for a while and wishes she could tell her mom how much pressure it is to make her proud. Anil comes in the room with Amy’s mother, he told her about how they are going to bill the insurance and she is on board, she thinks it is clever. Amy starts to cry and tells her mom that she needs help.

The staff surprised Floyd, he is thrilled.

Laura is finally lying down, but staring up at the ceiling.

Anil shows up at his son’s meeting, he gets a coin for being sober.

Amy’s mother is combing her hair.

Floyd is enjoying his party.

Rabbi is in surgery, Max is watching.

Helen is browsing profiles to find her sperm donor, Max comes in and tells her that rabbi is doing well. Max asks her to cancel his chemo, he doesn’t want to be a patient and his wife and the hospital need him.