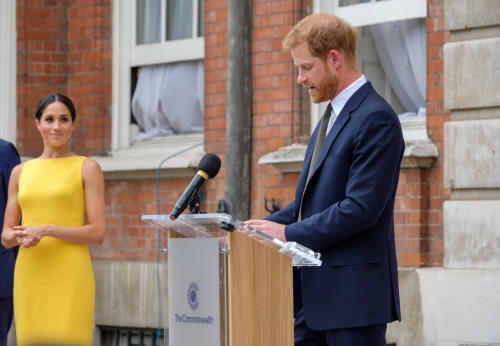 Prince Charles’ friend Nicky Haslam has gone on the record to slam Prince Harry’s new wife, Meghan Markle and her “frightfully common” family. In fact, the 78-year-old designer has nothing positive to say about the former Hollywood star, and has even gone as far as to criticize her wedding dress, saying that it was “made of concrete.”

While Meghan Markle has managed to win over plenty of new fans on both side of the pond, apparently she still has a lot of work to do. Because a few members of Prince Charles’ inner circle of friends are anything but impressed with the new Duchess of Sussex and her new role in the British royal family.

In fact, Haslam says that it’s Meghan’s family that is the biggest problem for the royals. According to the Daily Mail, Haslam explained, “They’re frightfully common. It would have been awful it that huge lump [Meghan’s father] had been there. The royals probably don’t quite know how to deal with them.”

Meghan’s father Thomas Markle Senior was a no show at her royal wedding at Windsor Castle back in May because of a last minute heart surgery that forced him to stay behind. In fact, the only person who attended the wedding was Meghan’s mother, Doria Ragland.

Meghan is reportedly not on speaking terms with any of her siblings or extended family for that matter. This is mostly because many of them have gone to the tabloid press to talk about their family’s personal issues.

If that weren’t enough, Haslam also had a few things to say about the Duchess of Sussex’s wedding dress. The Givenchy bridal gown was designed by British designer Clare Waight Keller. He said, “I didn’t very much like her dress. It didn’t fit, among other things. It should have been made of thinner stuff, it seemed to be made of concrete.”

So far Prince Charles himself has not made any comments about Nicky Halsam’s opinions or about Meghan Markle’s family drama for that matter, although it’s doubtful that he will. As far as Meghan’s relationship with her father Thomas, the former cinematographer stated that he is still waiting for his daughter to invite him to London to visit Queen Elizabeth and of course, meet her husband Prince Harry.

In the meantime, don’t forget to check back with CDL for all the latest news and updates on Prince Harry and Meghan Markle along with the rest of the British royal family right here.