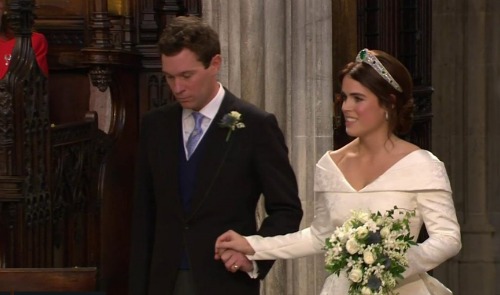 Princess Beatrice was the maid-of-honor for her sister Princess Eugenie’s royal wedding to Jack Brooksbank on Friday at Windsor Castle. But according to royal critics, it doesn’t look like Beatrice put much effort into helping her sister on what was the most important day of her life.

In fact, a lot of viewers couldn’t help but notice that Princess Beatrice took a back seat during the wedding ceremony and that she didn’t do much to properly fix the bride’s dress while she was making her way out of St. George’s Chapel. As a matter of fact, it was Eugenie’s father Princess Andrew who had to step in and do Beatrice’s job for her.

As the maid-of-honor, Princess Beatrice was supposed to make sure that her sister looked flawless throughout the entire wedding ceremony. After all, everyone still remembers how Kate Middleton’s sister Pippa stole the show when she was given the same task during the Duke and Duchess of Cambridge’s royal wedding back in 2011.

But it looks like Beatrice was given a different job at her sister’s wedding. Instead of being by Princess Eugenie’s side, she was with their mother, Sarah Ferguson instead. She even arrived at the wedding with her mother, sat next to Sarah during the entire ceremony and even exited the church with her.

It was 14-year-old Lady Louise who had to battle up the steps with all of the bridesmaids and page boys. A lot of royal watchers also couldn’t help but notice that Beatrice seemed to neglect her role throughout the entire day. As Princess Eugenie walked down the aisle, her father Prince Andrew and the best man were left to fix the bride’s dress instead.

There was also another moment in which Beatrice was supposed to assist her sister as she climbed into the carriage for her 15-minute procession around Windsor with her new husband Jack Brooksbank. But once again it was Prince Andrew who stepped in to adjust Eugene’s elaborate train.

Many speculate that Princess Beatrice’s job was to make sure that her mother didn’t feel left out at the wedding. If it weren’t for Beatrice, Sarah Ferguson would have to walk inside the chapel by herself. So far Buckingham Palace has not made any comments about the situation.

In the meantime, don’t forget to check back with CDL for all the latest news and updates on Princess Eugenie, Princess Beatrice, and the entire royal family right here.

The Dean of Windsor leads the vows and the giving of the rings #RoyalWedding pic.twitter.com/UTDo5qYPOW