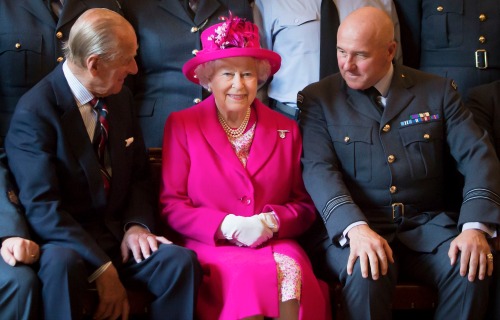 Queen Elizabeth is dismissive of Meghan Markle’s family drama. As a matter of fact, there’s a new report that says the Queen is apparently rolling her eyes at all of the drama that Meghan’s father Thomas Markle is creating in the media, as he continues to hurl accusations at the royal family.

With so many other things to worry about, the last thing that is on Queen Elizabeth’s mind is Meghan Markle’s father and all of the things he has been saying to the tabloid press. The British ruler has apparently been “rolling her eyes” at everything that has gone down between Thomas, Meghan, and her half-sister, Samantha Markle.

Queen Elizabeth isn’t even paying attention to any of the things that Thomas has said, including the comments he made about the royal family being out of touch with reality and how Meghan has cut him out from her life.

One source close to the situation told The Sunday Times, “Meghan doesn’t think it’s a fair game between her father and the media so she’s not going to engage in it or instruct anyone on her behalf to set the record straight. There have always been fears over his vulnerability. Now he’s got himself into a cycle of talking publicly. It’s very sad.”

So far Kensington Palace has not made any comments about Meghan Markle’s family drama, nor have they said anything about all of the comments that Thomas Markle has made to the media. In fact, Meghan has reportedly not spoken to her father since before her royal wedding to Prince Harry back in May.

Meghan might not be happy about it, but at the same time, she’s not going to further ignite a war of words between her and her father, and especially not in public.

For now, it looks like Meghan Markle will continue what she’s been doing for the last several weeks and that’s focus on her new role as a member of the British royal family. Now, whether or not Thomas Markle and the rest of her family will continue to air all of their dirty laundry in public remains to be seen.

With that being said, it doesn’t look like Thomas Markle will be getting the invite to Buckingham Palace that he has been desperately waiting for.

In the meantime, don’t forget to check back with CDL for all the latest news and updates on Queen Elizabeth, Meghan Markle and the rest of the royal family right here.