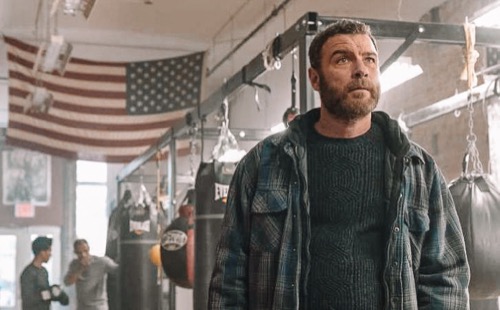 Tonight on Showtime Emmy Award-winning drama Ray Donovan airs with an all-new Sunday, November 05, 2018, episode and we have your Ray Donovan recap down below.  On tonight’s Ray Donovan season 6 episode 2 called,  “Staten Island – Part Two,” as per the Showtime synopsis, “No matter how much he wants it to go away, Ray isn’t done cleaning up the fallout from his jump. People are asking questions, and there’s a witness willing to give answers that could rock Mac and Ray’s worlds.

Across the country, Mickey’s heart attack behind bars forces the family to wrestle with what could be their father’s final days.”

Tonight’s Ray Donovan season 6 episode 2  is going to be exciting.  So be sure to bookmark this spot and come back from 9 PM – 10 PM ET for our Ray Donovan recap.  While you wait for our recap make sure to head over and check out all our Ray Donovan news, recap, spoilers & more!

Ray Donovan begins tonight with Ray (Liev Schrieber) finding Anita Novak (Lola Glaudini) inside the apartment, holding a guy and the man lying dead on the ground. She didn’t plan on shooting him, but Ray wonders why she brought a gun then. Anita tells Ray about the night, and once again this man was filming her with his phone and after he hit her, it escalated and now Ray needs to help her.

He walks out the door, calling Samantha “Sam” Winslow (Susan Sarandon) confirming that it was Sam who gave Anita the guy’s information and now Anita killed him. Ray didn’t agree to this, but Sam hangs up knowing he’ll help. Ray takes Anita’s phone and orders her to bar the door and deny anyone access.

Mickey (Jon Voight) is rushed by ambulance to the hospital. Ray walks the streets, while Bridget (Kerris Doresy) spends time with Smitty (Graham Rogers). Smitty sits in front of Bridget, feeling that her saving his life was awesome but she also gave him a reason to live. He gets on his on a knee and tries to propose to her, but she starts yelling at him. Both try to regather their emotions and Bridget says all the men she knows are bad and they will hurt him, and she doesn’t want to get hurt; he argues that he isn’t them, throws the ring and will just stay the way they are. Bridget retrieves the ring from under the couch.

Daryll (Pooch Hall) talk with Jay White (Brian White) and Antoine A Shawn Anderson (Donald Faison) and a new actress they would like to play the main character “Misty Train”. Meanwhile, Bunchy (Dash Mihok) throws the bottle of booze into the van and walks towards the foster home his daughter is in but is stopped when he gets a call from the hospital about his father, Mickey; saying he is in critical condition after suffering from a heart attack.

Bunchy calls Daryll and tells him to get Conor (Devon Bagby) and meet him at the hospital ASAP, but Daryll says he can’t do it. Bunchy hangs up after call Daryll some horrid names. Back at the restaurant Daryll does make excuses and leaves his important business meeting. Bunchy calls Ray, who is at the hardware store; telling him that Mick is dying, but Ray says, “I got to go.”

The Corrections Officer allows Bunch to sit down, telling him Mickey isn’t going anywhere; Mick doesn’t like that his dad is handcuffed to the guard. He suggests Bunchy say his peace to his Pops. Ray continues his shopping when Bridget calls and reveals that Smitty proposed and she accepted. Ray says he likes the guy and they love each other and that is what he thinks of it. He reminds her that all him and her mom want is for her to be happy.

Ray is trying to cash out, as the cashier jokes that Ray must be cutting up a body with all this stuff. Ray receives a third call, but this time it is Sean “Mac” McGrath (Domenick Lombardozzi) and he learns the story is being released by the NY Times; Ray agrees to meet him. Ray questions if there is anything else he needs to know, especially like if the reporter spoke to anyone else, or if there is something Mac is hiding. Mac says Fetu Autufuga (Kelemete Misipeka) is a brutal man and yes, he planted drugs on him and brought him out to the I-3-2, where he knew judges wouldn’t tolerate that kind of crap. Ray requests cocaine, a gun and a silencer from Mac.

Ray returns to the apartment and finds Anita drinking. She wants to know how much Sam pays him and since the money isn’t enough, why does he do it. She talks about her campaign and keeps wondering if she really is this person. Ray walks Anita out of the building and gives her specific directs to follow, but she seems more curious about what he is going to do. Once she is gone he calls Sam, reminding her that she was with Anita last night. Meanwhile, Mac, at the precinct, goes to the evidence locker. Anita stands in the middle of the road waiting for another cab as Ray said but everyone is watching her. Outside the precinct, someone is watching Mac too!

Bunchy sits with Mickey and confronts the guard on thinking his dad was a piece of crap, but shares that his dad is “tough as nails” and that is what his boys needed. He may have run around on their mother when she was dying of cancer, but he loved them all. He even loved Bunchy, and right now there aren’t a lot of people who do.

Ray returns to Mac’s squad car, gets the weaponry and mac can help by calling someone in that he trusts when they do the raid. He won’t divulge anything to Mac but advises him to send his son to Terry’s (Eddie Marsan) gym and Ray will meet him there later. Ray puts on gloves, finds the video of him recording Anita having sex and deletes the folder. Before he can finish the job, he calls Fetu Atufuga informing him that he has changed his mind, he feels he just spun out and is thinking about his kids. Fetu just wants the money $120grand, in cash, for his silence; he agrees to meet Ray at the address he texts him.

As Ray is waiting, he receives a message telling him he will regret this as Mickey is his father; suddenly Fetu arrives to the man’s apartment. He loves the place and takes the drink Ray offers him but is quickly shot in the head, dead! Ray places the gun and drugs around the place and the other gun in Fetu’s hand before he packs up and leaves; literally killing two birds with one stone.

Daryll drives Conor to see Mickey, but along the way, Conor feels someone in the family had to become military. A Shawn calls Daryll excitedly announcing they got the actress they were schmoozing earlier to play the lead character.

In Mickey’s room, the guard uncuffs himself to use the bathroom and Mickey wakes up to talk to Bunchy. He tells Bunch he saw the Grim Reaper and told him not yet! He pleads with Bunch to get him out of there. He swears he didn’t kill Barnes and he has to get him out of there. Once the guard returns, Bunchy says he is going for a walk and will be right back. Bunchy walks to a local gas station and sits on a bench, where Ray calls him, learning Mickey isn’t gone – yet! Bunchy tells him that CPS took Maria from him too because of his drinking and his family, as they are all bad for her. Ray reminds him he is a good father. Bunch sees “Dad’s Warehouse” across the street and hangs up on Ray.

Sam dismisses Mr. Sandro (Paul Salvatoriello) when Ray walks into her place. She admits that last night’s situation was her fault, but she really needs Anita. She tells him that she is trying to require some property, but currently, a prison is sitting on it and the mayor blocked the say, hence why she needs Anita to win the election. Her deal is $100,000 a week until the election and when she wins, Sam will double it.

Ray sits down and Sam wants to know about that night. Ray says he was tired and all of a sudden Abby was there like she had been there all along and he started to think that without her there wasn’t much for him. Sam hands him a drink, telling him to look at her and that she is glad he is there and not dead. She and him are going to make a mayor! Ray puts the money in the purse and staggers out.

Bunchy returns to the hospital room with food for the guard and himself, unfortunately, he also has a hammer from the store. Just then Darryl and Conor walk into the room, finding the guard bashed over the head on the floor with blood coming out of his head and both Bunchy and Mickey gone.

Ray walks to the gym where Mac is with his son Jimmy. Mac has to bring Jimmy back to his mom and will meet Ray at the bar later. Terry offers his congratulations to Ray, even though Bridget and Smitty are young. They briefly discuss Mick, but both feel they have no regrets when it comes to their father. Bunchy is driving through the desert with his dad, initially worried he didn’t break his dad out only for him to die on him. Mickey says he is already a ghost who has been haunting people most his life.

Ray sits on a bench, looking at the bridge when Daryll calls him, saying Bunchy broke Mickey out; almost killing a guard. He wants to know what he should do because he knows Mickey is going to kill him. Ray hangs up on him and walks to the street to hail a cab.