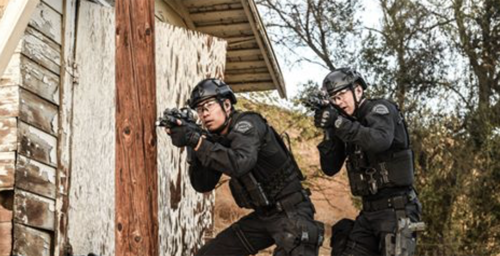 Tonight on CBS their new show S.W.A.T. inspired by the television series and feature film airs with an all-new Thursday, February 1, 2018, episode and we have your S.W.A.T. recap below.  On tonight’s S.W.A.T. season 1 episode 12 called, “Contamination” as per the CBS synopsis, “Hondo and the SWAT team join forces with the FBI on a manhunt to find members of a militia group planning a domestic terror attack by weaponizing cyanide. Also, as Jessica’s new police initiatives with Michael Plank, president of the police commission, move forward, she braces herself for the negative impact the plans could have on her relationships within the department”

LAPD S.W.A.T. took down a weapon supplier on tonight’s all-new episode, however, while they may have gotten the supplier, he revealed that it hadn’t been his first time in the city.

The supplier had been dropping off crates of liquid cyanide for weeks. He readily confessed to it and had also stated that he had sold the crates to survivalist types. As in men that didn’t believe the government held any sort of authority over them and that they needed to protect themselves from big government. Therefore, these men were paranoid and dangerous. They could easily turn to violence when they believed they have been pushed or the rights fringed upon so they were not the sort of men to be given access to liquid cyanide. The poison could easily turn into an airborne bomb and so the FBI had needed to figure out why they hadn’t known any of this.

The FBI hadn’t heard any chatter about a possible terrorist attack and so they had to turn to the supplier because the information was more up to date than theirs, but the FBI later received another break in the case when two men matching the supplier’s intel had run into some trouble. The two white guys up there in their years and driving a blue van had gotten pulled over by a patrol cop that then demanded to see their license and registration. She would have needed both to write up a ticket for them and hadn’t understood why the men were giving so much back-talk. They kept claiming that she had no sovereignty over her and that she was abusing her authority.

The officer, however, had still gotten some of their paperwork and even then there were still a few problems because there wasn’t a name on the paperwork. The driver had claimed that he had no name and that he didn’t need to supply one. He said that all that mattered was the fact the car was under his control and that he was not a citizen when actually it didn’t matter if he was a citizen or not. He still had to show his ID under American law and so the cop wasn’t giving the guys an inch. She demanded their license and she had asked the shifty passenger to place his hands on the dashboard where she could see them. And that had unfortunately upset the passenger.

He had shot the cop from his side of the car and the last thing she remembered before passing out had been the driver calling the shooter Crockett. Crockett was the man’s given name and so the FBI was able to identify him as Crockett Jacobs. A survivalist that believed in sending a message by any means and a man the FBI had no means of finding until they identified the driver. The driver had been a man named Harley and S.W.A.T knew how to find him. He had a wife that still had bills to pay and so they were able to easily find her as well as bring her in. The wife as it turns out had been a survivalist too.

The wife hated big government and Hondo thought the only way to reach her was to have her questioned by local police. Local police were responsible for her direct protection and so Hondo thought she is more susceptible to him than the FBI. So the FBI decided to let him interrogate the wife. She was difficult though eventually, Hondo got her to open up and at least explain to him why she hated the government so much. She said that she and her husband used to be farmers before the government decided to reroute their water and destroy their land. Also, she mentioned how that when she tried to fight the EPA that she had been questioned for hours and so she blamed them for her miscarriage.

The wife had miscarried her child while in federal office and had never been able to get pregnant again. That’s what truly turned her and Harley against the government, but she knew that Crockett had stoked her husband’s hatred and so she was willing to open up to Hondo about that man when she found out he had shot a cop. That had been too much for her because she never wanted to hurt anyone and she wanted her husband to hurt anyone either so she talked. She told them where the compound was and S.W.A.T quickly moved in. They stormed the compound and they managed to take prisoners. Except Crockett got away with a few of the guys.

Crockett refused to back down and was going to go ahead with his plan to use the cyanide, however, SWAT did take Harley prisoner and so they had his wife brought in to speak to him. She wasn’t a true “Free Citizen” anymore because she finally acknowledged that it hadn’t been the government’s fault they lost their son and had wanted her husband to open his eyes as well. He had joined a cause that went against their values because he had been in pain and Crockett had used that to his advantage. So she gave her husband an ultimatum. She told him if he didn’t tell the authorities everything he knew about cyanide that she was going to leave and that opened his eyes.

Harley told Hondo that Crockett was planning on pouring the cyanide into their water supply and that meant they were never going to turn it to gas. They had kept it as a liquid so no one would know that the water supply was poisoned and thousands would continue to use it yet Harley had informed them in time and so S.W.A.T. was able to stop the catastrophe by killing off all the remaining survivalists. But change was coming at S.W.A.T. and in the police department as a whole. Jess was close to implanting the reforms she wanted to make in the police department and one of those reforms were actively encouraging more women to join the department. Including that officer that dealt with a traffic stop going sideways.

Officer Donna Gentry wanted to join S.W.A.T. and had thought her dreams were over when she took a bullet that messed up her shoulder, but Chris had been a friend and had told her to never give up that dream.