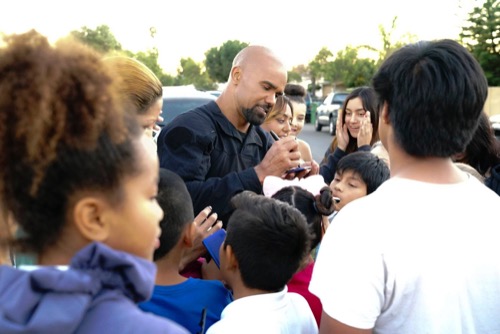 Tonight on CBS their new show S.W.A.T. inspired by the television series and feature film airs with an all-new Thursday, March 1, 2018, episode and we have your S.W.A.T. recap below.  On tonight’s S.W.A.T. season 1 episode 13 called, “Fences” as per the CBS synopsis, “Hondo and Jessica’s secret relationship comes to a crossroads when Michael Plank, the president of the police commission, discovers their affair. Also, when Hondo and the team assist with the federal investigation to bring in an undocumented fugitive, they find themselves at the center of a citywide immigration debate.”

Someone leaked Jessica’s accountability proposal on tonight’s all-new episode of “S.W.A.T” and that could put her whole project in jeopardy.

Jessica was worried that news of her proposal could turn the entire department against her and she hadn’t fully fleshed out her proposal with Commissioner Plank, however, Hondo assured her that she was worrying over nothing. He said that her proposal was still a good idea and that the rest was merely noise. Hondo had truly believed that at a time when he reassured her and so he didn’t think he was going to hear about it back at the station. He had gone in because ICE had wanted a backup from the police and so he wasn’t expecting Mumford to corner him or that it would be about the proposal. He thought it was a good thing and that officers that have done nothing wrong had nothing to worry about.

Unfortunately, Mumford thought differently. He thought Jessica was betraying the badge and that it would be a miracle before any police officer wanted to come to her aide though Hondo was able to push the discussion to the side to focus on the case he was helping ICE with. He learned they were looking for a man named Toro Ochoa who was wanted for murder and so his team was supposed to be providing backup for ICE. ICE was going to storm a building where most of Toro’s crew could be found and they did need backup in the end when the group of men decided to make a run for it. They were going to take the back alleyway and instead they ran into Hondo’s team who asked them to stand down.

Two people out of the group decided to ignore that order and still tried to escape. They jumped over the wall and was running through someone’s backyard when they caught up to one running across the street. That guy had claimed that he didn’t belong to the gang and that he had just gotten rounded up with the others with little explanation, but the reason he ran had been his immigration status. He was an undocumented immigrant and had admitted to that with ICE listening in so ICE demanded that the police hand him over. It was their job to arrest men like Carlos Acosta after all and so Officer Street didn’t know how to tell them “no” or if he was even allowed to. He just handed over Carlos and later received backlash for it.

The whole incident with Carlos, Street, and the ICE Agent had been caught on camera and so the media was running with the news that a police officer in handed over an immigrant despite promises that had been made to that community. The community of those that were here without paperwork had been told that the city was a Sanctuary city and that they wouldn’t be deported or rounded up by the police. That had been a promise the Mayor had made to the city because he didn’t want that community to be afraid of the police and refuse to report a crime because they didn’t want to be deported. And so Street got a lot of flak for going against the Mayor’s orders because that had everyone coming out against the police when they really didn’t need it.

It all went back to the proposal. The proposal had poked the hornet’s nest and the department was coming out against Jessica which in turn didn’t look good for them. The police needed all the help they could get from the community and a lot of people blamed Jessica for putting them in such a mess so they lashed out. Her car windows had gotten smashed and Hondo had run to her side to check on her yet she had been fine and she hadn’t wanted to believe someone would target her because of her proposal. That just didn’t change the fact that her car had been targeted and so Hondo didn’t rule anything out. He also stayed with her for a while because he hadn’t wanted to leave her by herself after the incident and they had been seen embracing each other.

Plank had watched the entire thing from his car and he had later confronted Jessica about it because she was sleeping with her subordinate. If anyone else had found about it then their whole proposal would be questioned and so Plank decided to cut his losses. He told Jessica that he was backing away from the proposal and, without him, she knew the entire project was dead in the water. But she hadn’t wanted to let things end there. She had also asked Hondo to step into her office and told him about everything that happened. They thought by not disclosing their relationship that they were keeping their privacy when in actuality they were just covering up a secret.

They hadn’t said anything because neither of them wanted to transfer out of the department or give up the position they had worked so hard for, however, Hondo didn’t have the time to discuss getting caught or where they could go from there. He and his team had been left holding the bag. The feds had wanted them to bring in Toro Ochoa and it was hard to get answered about Ochoa when there were protests outside. Carlos’s Acosta sister Ariana had brought together a crowd and created a movement because she wanted answers from her brother. Her brother should have been safe from deportation and so Ariana was fighting for him. She was out doing interviews, holding rallies and was creating a movement so Jessica had no choice.

Jessica went out there and talked to Ariana because she understood where the other woman was coming from. She came to this country when she was a kid and she eventually she became a citizen. Therefore, her story was a lot like Ariana’s. Ariana came to this country when she was a kid as well and she agreed to talk to Jessica inside the station because she wanted to tell them about Carlos. Carlos was more than just an illegal immigrant. He was also the big brother that got her out of El Salvador to escape the gangs and she was now in medical school because of his support then as well as his continued financial support. He took day laborer jobs to provide a roof over their hands and he kept them safe.

Ariana asked why a man like that had to be punished for what Toro Ochoa did yet there had been a few things she hadn’t known about and that the cops eventually learned. They learned that Carlos had been seen talking to Toro a few days ago and so they had to go directly to Carlos because Ariana didn’t know anything about that. So they visited Carlos at an ICE immigration holding facility and they questioned him. He told them that he knew it looked back through it wasn’t what it looked like. He said Toro had overheard talking to someone about getting Ariana to a safe place if ICE ever came looking for her and that Toro had demanded that information. The gangbanger even went as far as to toss Carlos’s place for answers.

The police had also wanted answers. They wanted to know where this safe place was and they promised not to disrupt the underground so he talked to them. They found the location of one person in this underground railroad and they ended up finding Toro there, but catching their guy did nothing to stem anyone’s fury and there were also people out there that didn’t like what Ariana was saying. She had become the face of something and so a group called the Promise Guards planned on kidnapping her because they wanted to toss her over the border as a message to all illegal immigrants. This group had thankfully been betrayed by one of their own who didn’t believe in going to such lengths because that wasn’t what that signed up and so the police were able to respond accordingly.

They geared up to go to the rally and, before they left, Hondo had a word with Plank because he wanted to know what was really bugging Plank. He assumed that Plank must have been jealous of his relationship and that’s why he struck down her proposal except Plank laughed that off. He said that he couldn’t afford to have a woman preach ethics to cops while she herself was breaking the rules and so he told Hondo that Jessica could have a bright future ahead of her. She was smart, capable, and cared so Plank believed she could go much further than just being a captain and some of what he said had gotten through to Hondo. Hondo went to that rally with his mind made up. He knew he was going to end his relationship with Jessica and had waited until after they rescued Ariana to break the news.

Jessica, of course, had been heartbroken, and she told him she loved him before he walked away except they both knew they couldn’t stay together.

So they did their job.

Jessica had even found out where Carlos was going to be moved and so Ariana decided to follow him because she didn’t want to give up on getting him released one day.

Plus, Ariana had Street to thank for rescuing her at the rally and so she told him she didn’t blame him because all he did was a job.