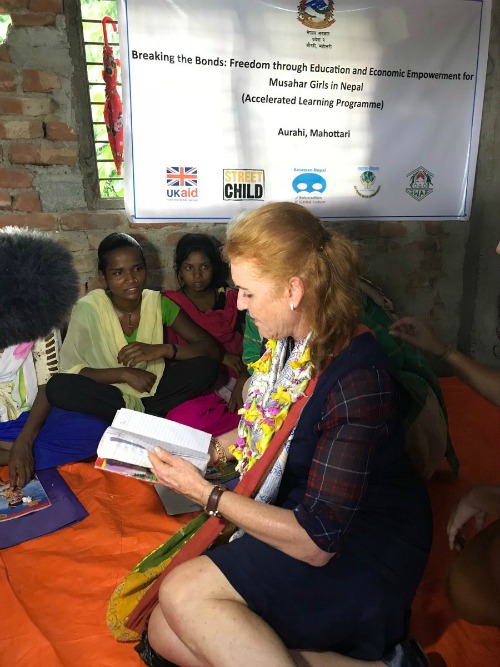 Even though their royal marriage fell apart, Sarah Ferguson is opening up about her ex-husband Prince Andrew and revealing that she was madly in love with him on their wedding day. As a matter of fact, Sarah couldn’t help but gush about her ex and the love they shared between each other as her daughter prepares for her own big day. Princess Eugenie is set to marry her fiancé Jack Brooksbank in a lavish ceremony that will take place at Windsor Castle in October.

Speaking to Piers Morgan in a new interview, the Duchess of York opened up about all of the excitement she felt on her wedding day, from the moment she held Prince Andrew’s hand for the first time to their debut on Buckingham Palace’s iconic balcony as a married couple. She said that being a royal wife was “mesmeric.”

Sarah said, “Let me go back in time. You are taken with such a wave of energy, that it is just mesmeric, it is just extraordinary. And you’re so in love — anyway, it’s your wedding day. Like every bride’s wedding day, it’s a special day. But you’re standing there with the man you love. And then there are people out there who are wishing you so well. And it’s just extraordinary.”

Sarah also admitted that she and Prince Andrew married for “total love” and that when she went up the aisle she knew she had “married my man.”

Even though Sarah and Andrew had an intense romance, their marriage came crashing down very quickly. Many reports indicated that Sarah had a relationship with businessman Steve Wyatt at the time. Their marriage began to crack as early as 1991, just one short year after the birth of their daughter Princess Eugenie. The couple divorced in 1999, but vowed to remain friends for the sake of their children, Princess Eugenie and her sister, Princess Beatrice.

Prince Andrew and Sarah Ferguson have remained so close though that a lot of people can’t help but wonder what is really going on with their relationship behind closed doors. Nevertheless, Sarah insists that Andrew has always had a kind heart and even offers her a room to stay in whenever she arrives in England. They have always insisted that they are just close friends, and no more.

In the meantime, don’t forget to check back with CDL for all the latest news and updates on Sarah Ferguson, Prince Andrew, and the entire royal family right here.