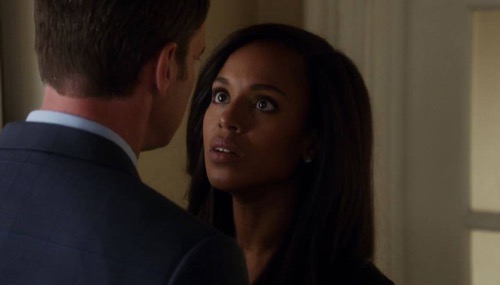 Tonight on ABC Scandal starring Kerry Washington continues with another exciting episode in an all new Thursday, April 5, 2018, season 7 episode 16 called, “People Like Me,” and we have the Scandal recap for you below. On tonight’s Scandal season 7 episode 16 as per the ABC synopsis, “On the heels of her commitment to turn over a new leaf, personal turmoil strikes Olivia once again when Mellie demands that she get rid of Cyrus once and for all.”

Mellie tells Liv she wants her to kill Cyrus. They don’t have a choice. Mellie tells her they are in a war with him. He is attacking her, the Oval and more. Does she really want Cyrus to erase their climb?

Jake comes in to see Cyrus. He reports that he is keeping an eye on Mellie. Jake wants to strike against Liv and her team. Cyrus shuts him down. He lets it go.

Mellie tells one of her assistants to tone down her crazy and the only person she wants to talk to is Liv. Meanwhile, a press conference on Cyrus’ airplane hijacking is being held with Mellie a public suspect. Liv talks to Quinn and the team. They need to find a way to get Cyrus to alone. Liv needs to talk to him and get him to end his war against Mellie.

Cyrus gets a flower order. It has a note to meet Lonnie. He heads to the spot. Liv and Huck are there. She tells him to have a seat.

Mellie watches the press conference. Marcus comes in. He wants to help her fight back against these allegations. She brings him to a window in the oval away from the view of the cameras. She tries to tell him about Liv in a code but he doesn’t understand.

Liv offers Cyrus a drink. She tells Huck to take Cyrus’ phone and step outside. She has an offer. He needs to let it all go and if he doesn’t her team is going to expose him. He threatens her with his own team.

Abby and Quinn work to hack into Cyrus’ phone. Marcus goes to see Fitz. He is concerned for Mellie. Fitz is nonchalant, telling him the Oval will do that to you.

Mellie makes herself a drink. She sits on the couch in the Oval and speaks up to the ceiling to speak to the camera. Jake watches from his office. Mellie threatens him. He is going to end up alone.

Liv visits Huck outside the room. She wants to know if he talked to Quinn. Huck asks her if she has poured from the bottle of wine she poisoned. Has she poisoned Cyrus yet? He knows she bought 3 bottles, 2 being her favorite. The other is her Plan B. She tells him she hasn’t done anything yet.

Back inside the room, Cyrus teases and taunts Liv. He asks her if she thinks she would have been a better person if she never met Fitz. She doesn’t want to answer. He keeps drinking. Liv is annoyed. He tells her that she isn’t going to change him. He is who he is. Liv leaves the room. She sits on the floor by Huck. Quinn calls. They found the person who hacked the plane. He is dead. Liv is angry. She tells Huck to leave so she can execute Plan B. He argues with her, but eventually walks away.

Fitz calls Mellie to ask her how she is. He tells her to do better. Find another way. Meanwhile, the Admiral reports to Jake. He cannot find Cyrus.

Liv hands Cyrus a glass of her special wine. Jake arrives just in time. She asks Cyrus why he is leaving so quickly. He needs to drink his wine. Jake points out that it is poison. He hands her his gun and challenges her. She doesn’t do it. He calls her out. She doesn’t actually do anything. She has people like him pull the trigger. Jake and Cyrus leave.

Jake’s wife wants to know what Cyrus wants him to do. He tells her he is going to do what he thinks is best to keep them safe. She calls him the VP’s bitch. She was supposed to be royalty.

Liv comes to meet Mellie. She is upset. She tells her she couldn’t do it. Mellie is disappointed. Liv tells her they have to stick together, be stronger. They can beat them. Liv asks her if she is with her. Mellie tells her yes.

Mellie releases a statement, addressing the attempted assassination of Cyrus. She calls the allegations ones that have been stoked by her opponents. She is not guilty. She upholds the law, she doesn’t break it.

Liv knocks on Fitz’s door. She has been thinking about the old days. She thought maybe they could drink to the ways things used to be. She kisses him. He kisses her back.

Cyrus shows up at Jake’s. He thinks Jake was right. They need to determine what to do with Liv. Jake tells him that he already called Lonnie and Liv is now a suspect in Rashad’s death and the hijacking. Cyrus us mad. This is his operation. Jake chuckles. He wants to show him something. He leads Cyrus to the kitchen where he steps over his wife’s dead body. He pours them a drink. He tells him that they need to work together. He doesn’t work for him. Cyrus is shaken. But he agrees they need to work together.