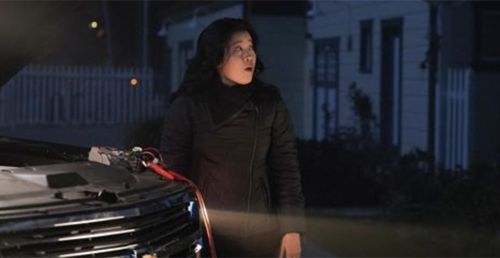 Tonight on CBS their hit drama/comedy Scorpion airs with an all-new Monday, January 22, 2018, season 4 episode 14 and we have your Scorpion recap below!  On tonight’s Scorpion season 4 episode 13 “A solar storm knocks out power in Los Angeles, and Team Scorpion must help a teen pilot and his girlfriend who are lost over the Pacific without navigation or radio contact. Also, during the crisis, Walter must look after a group of Ralph’s classmates, and Cabe tries to tell Allie finally that he loves her”

Paige is a little touchy with Flo when they go over her investor’s speech. Walt overhears and confronts Paige. She tries to brush it off. Meanwhile, Cabe and his girlfriend are off for the weekend together to his lighthouse. Just as they arrive they hear a noise. Cabe finds Toby and Happy playing dress up. Apparently, they booked the same weekend. Cabe tells Happy and Toby he needs a favor – he wants to tell Allie he loves her so he needs the house. Just then, the electricity goes out.

Sly and Paige are out together, driving. Walt is back at the warehouse with Ralph and his friends. They all talk. It looks they are in the middle of a blackout due to a solar storm. Sly has a ham radio in his bag back at the warehouse. Ralph grabs it while a little girl tells Walt she is scared.

Walt makes contact with the ham radio, speaking with a government agency. They need Team Scorpio’s help locating a seaplane that cannot contact them. Happy, Toby and Cabe get to work trying to get the lighthouse light back on with a makeshift generator. Ralph and Walter launch a drone. Sly and Paige head to a local naval academy to get the flight patterns so Sly can calculate where the plane is in the air.

Cabe and Allie watch the sky with binoculars to see if they can catch a glimpse of the seaplane. Just as Cabe attempts to tell her he loves her, Allie spots the plane. Walter flies his drone right onto the front of the plane. They tell the young teen pilot and his scared girlfriend they will assist him in landing. He is freaking out. Toby jumps on the line and gives him a breathing technique. Happy takes over after to instruct him. Meanwhile, Paige is making quiet digs to Sly about Florence. Sly calls her a bully.

Griffin, the pilot, sees the lighthouse. Just as he is about to land he hits something. He flies right over Happy and Toby. Happy notices he smashed his float. Now how will they land?

Walt has to break the news to Griffin and his girlfriend that they need to perform a controlled crash now that the float is broken. Sly and Paige get to work to find the flattest slice of land for them to touch down on. Sly also needs to calculate a safe speed for them to touch down. Walt and the kids need to find out what they can use on the plane to cushion the inside.

Happy is irritable as she and Cabe look for supplies. Happy is mad that her weekend was ruined. She is supposed to be making a baby. Sly shares his calculations. Things are looking good. If this doesn’t go right, the two could die.

Cabe and Happy have set up the net. Griffin is nervous. He doesn’t know if he can pull this off. His girlfriend goes in the back of the plane to get all of their belongings to cushion the impact. Griffin tells the team that he was going to tell Rachel he loves her. Cabe talks him into telling her while telling Allie he loves her too. Allie tells him the feeling is mutual.

Their plan isn’t going to work. Cabe and Happy fix the net to catch them, not the plane. This is the best plan they can come up with. The plane is running out of fuel. Griffin and Rachel prepare to jump. Walt counts down. They take the plunge and scream the whole way as Toby, Cabe, Happy and Allie stand waiting for them to fall into the net. The wait is painful as they fly through the sky. The two fall into the net with a thud! They are safe.

Back at the warehouse, the team watches Walt’s very nerdy landing video he made with the kids. Flo shows up and everyone scrambles. Flo tells Paige she got the funding. Paige apologizes for being short. The two make up. Just as Paige goes to hug Flo, Flo runs off. Meanwhile, Ralph is finally going to get his wish and spend more time with Patty. Sly has added him to his campaign team.

Paige apologizes to Walt for being upset over the dream. They need to continue to trust each other.