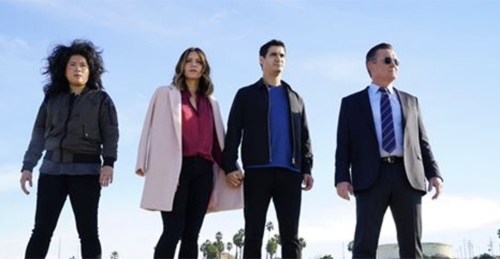 Tonight on CBS their hit drama/comedy Scorpion airs with an all-new Monday, January 29, 2018, season 4 episode 15 and we have your Scorpion recap below! On tonight’s Scorpion season 4 episode 15 “Team Scorpion must prevent an incoming tsunami from hitting a vulnerable nuclear power facility, and Toby secretly helps his ex-fiancée retrieve her stolen identity.”

Cabe is quizzing Walt and Paige about their romance. The two will compete tonight and if they lose, they lose their desks to Happy and Toby. The team goes on their latest mission. Toby asks Paige if he can sit their latest mission out. He threw his back out procreating. Paige is disgusted. She calls Sly to find out his ETA. He is in line waiting to get his book signed by his favorite author. The team takes off and leaves Toby behind.

Minutes later Toby lets his ex-fiancée, Amy, in. She needs his help with her bank accounts. After the bunker incident, she is broke because her fiancé drained all of her accounts. Her identity has been stolen. They take off in the car. At a stop light, Sly sees Toby and her in the car while he waits on the sidewalk for his book to be signed.

Happy is in a tunnel at a power plant trying to seal a wall that was damaged by an earthquake as Cabe watches over her. A tremor shakes her while she is on a ladder. Sly connects with them remotely. He warns them that a tsunami is headed their way.

Toby brings Amy to meet Rhonda, a woman from Toby’s past who runs an underground casino. Toby asks her for help locating anyone who she knows that sells identities. Rhonda laughs at him and threatens to have his legs broken. He still owes her $8k from back in the day. Toby laughs he knows she sold off his debt. She refuses to help him. Toby watches the monitors in her office and shows her how he knows someone out there is cheating. Rhonda tells him she will help him if he plays the tables and spots the cheaters. Meanwhile, Happy wants to know where Toby is. Sly tries to lie but she knows. He tells her about seeing Toby with Amy.

Happy finishes patching the wall. The client tells them that she has a chopper on the roof waiting to take them to safety. The team asks about the locals. She tells them there isn’t a plan to bring them to safety. Walt declares that they need to stay and stop the tsunami.

Walt’s plan is to create an underwater avalanche that will take out the tsunami. Sly isn’t too confident. After some talking with the team though he changes his mind. They can do this. The team gets to work. Meanwhile, Toby finds out the man he needs to talk to for Amy is an old enemy and also the person who bought his debt.

They only have 11 minutes until the tsunami destroys the entire area. Paige and Happy turn the valve on a large pipe that will send steamy, bubbly water into the ocean. They turn it together but it stops. It is stuck. Happy decides she is going down in the hot steamy tunnel to open the baffles. Walt is angry. He will do it. Happy tells him there isn’t enough time. She slips in and Paige shuts the hatch. She kicks the baffles and it opens. Steam comes pouring out. She comes up minute’s later with her hair everywhere. Her face is red.

Toby meets with Gooch. He offers him the ability to place safer bets. Gooch doesn’t want to hear it. He jams Amy and Toby in a casket he has in his office.

The team watches a large wave come in. Sly warns them that it could build and be dangerous. It reaches them and spins out into nothing. They did it!

Toby and Amy are in the casket that is loaded into the back of a car. Gooch brings them to a cemetery and waits for his men to come and bury them. Inside the casket, Toby and Amy go back and forth blaming themselves. Amy kisses Toby. He asks her why she did that. She tells him no one has been nice to her in a long time. He doesn’t want to die an adulterer. Out of nowhere, Cabe and law enforcement arrive. Happy opens the casket and calls Toby a jackass.

Back at the warehouse, Toby and Paige prepare snacks for their game night. They decide to just give Happy and Toby their desks. They have had a bad night. Cabe calls out to Sly. He has a visitor. It is his favorite author. Cabe reached out to him and tell him how Sly misses his signing so he could help save the lives of thousands. Toby and Happy have a heart to heart. Happy doesn’t think Toby stepped out on her. She was terrified when she found out he was in Korea Town. She doesn’t want him to slip back into his old ways.