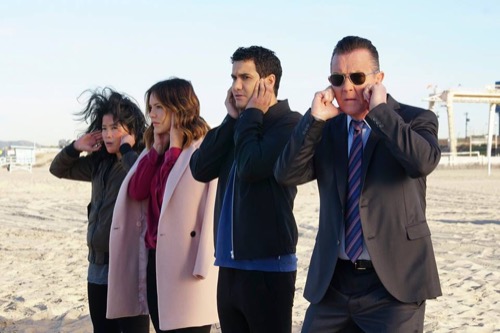 Tonight on CBS their hit drama/comedy Scorpion airs with an all-new Monday, April 9, 2018, season 4 episode 21 and we have your Scorpion recap below! On tonight’s Scorpion season 4 episode 21. “Paige’s maternal side goes into high gear when Team Scorpion must save an unconscious, hypothermic boy stuck in the wheel well of their airborne airplane. Also, Walter’s white lie to Paige starts to take a toll on him, and Paige realizes something’s up.”

Happy comes into work on her motorcycle. She has been blowing off steam since she and Toby stopped trying to make a baby. Toby is worked in. He needs her to take it easy so she is alive to make a baby when they try again in a couple of months. Walt arrives. He is feeling sick. He thinks he has Lyme Disease. Toby thinks the guilt of going to the lecture with Flo has him feeling guilty.

The rest of the team is on a flight. There is extra turbulence that is setting Sly on edge. He and Cabe start talking about Flo. Cabe thinks he needs to ask her out. As they talk, Cabe notices that the flight crew is acting nervous. Cabe approaches them. He identified himself early. They tell him the brake light went on and off earlier in the flight and now a strange signal went off in the cargo area. They start going through luggage when they realize the signal is coming from under the plane. They use sonar to detect what is going on. There is a person on the plane. They must have a cell phone on them.

After some research, they realize that they have a young kid named Kenny in the stowaway. He snuck on the plane to hitch a ride to LA where his dad lives.

Cabe and the others realize Kenny is in distress. He needs heat and oxygen until they can land the plane. Walt works remotely to help lead them. Ralph works to find a way to commute with Kenny so they can calm him down. Toby realizes that Kenny isn’t moving. They start sending heat into the wheel well. They finally connect with him via video. He has a bad signal. Walt tells him to try to climb a bit higher. Kenny steps on a wire and something short circuits. Smoke starts to fill the air. They have a new problem now.

The captain tries to shut off the failing engine that has occurred due to the short circuit but it won’t stop. Happy and Toby are at LAX waiting for them to touch down. Meanwhile, Kenny is being exposed to a lot of smoke. Paige gets Kenny’s dad. He video chats with Kenny. Kenny is upset. After he talks to his dad, Ralph tries his best to make Kenny feel better about his bad decision.

The team determines with only one engine working that they won’t be to LAX fast enough for Kenny to survive. They need to rescue him without causing a pressure drop in the plane. Walt tells them if they cut in the right place in the wheel well it won’t depressurize the plane. Sly and Paige get to work. Something goes awry when the air lock opens. Paige falls down into the stowaway area.

Heavy turbulence starts to shake the plane. They have to land. Paige secures herself in the stowaway with Kenny. The rest of the passengers panic. The captain opens up the wheel well over the ocean.

They manage to land the plane. Paige has some bumps and bruises. Kenny too, but they are both safe. Toby tries to talk to Happy again. He wants her to be safe.

Cabe thinks today is a good day for Sly to ask Flo out. He has been beating the odds a lot. Meanwhile, Ralph asks Patty out and although she is flattered he is just 13. Walter is acting funny and Paige knows he is lying about something.