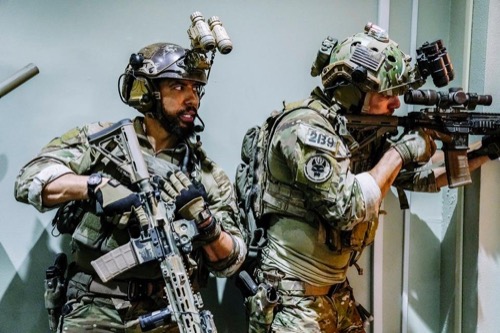 Tonight on CBS their new military drama Seal Team airs with an all-new Wednesday, October 31, 2018, episode and we have your Seal Team recap below. On tonight’s Seal Team season 2 episode 5, “Say Again Your Last” as per the CBS synopsis, “Bravo Team is tasked with rescuing a group of American students who are being held hostage in Mumbai, and suffers life-threatening injuries.”

The Bravo team is still under fire at a hotel with Adam leading the mission after Jason stayed back to deal with the death of Alana. Clay takes one to the chest. Ray checks him out. The bullet didn’t penetrate but he has stopped breathing. He comes to but he has a concussion. They get directions from Davis to get to the university. Adam commands Clay to shake it off.

Meanwhile, Jason watches the news as he paces in his locker after telling his supervisor he needs to resign for his kids. He looks around at his gear. He has his stuff packed. His super helps him load it into his truck.

Bravo comes under fire again. Someone is blown a distance and is on fire. Clay watches with horror. It was Adam. Blackburn radios. What did they just see. Sonny and Ray tell Clay to answer. He cannot answer, he is in shock. Ray radios that they have lost Adam, he is dead. Clay doesn’t want to leave Adam. They tell him they don’t have a chance. They will come back for him. Ray leads the pack after they cover Adam up. Sonny tells Clay they need to get payback, not mourn.

Jason takes a call at home. He is sick of hearing from friends and their sympathies. Emma comes in. They talk about Alana and his friends trying to help. He comments that he needs nothing. They watch the news together. The news shows the university where the hostiles have taken hostages where the team is headed. He shuts it off after Emma says she is scared.

Jason rips through his stuff in the garage. Emma checks on him. He tells her he is just worried about the boys. The phone won’t stop ringing. He tells her not to answer.

Jason answers the phone. He is told about Adam. Meanwhile, the team makes it to the university. Outside, they talk to a female who managed to escape. They try to get information from her but she is hysterical. Dito gets her scent and they head in. They found dozens of scared students in a library.

They lead the students out of the library. Meanwhile, Emma sees Jason in his dress uniform. He needs to go tell Adam’s family. Emma wants to go. She knows his daughter and she knows how she is going to feel.

The team makes their way through the dark library picking off hostiles one by one after Davis kills the lights remotely. They finally make it out. Clay gets angry that they have to wait around for a bit. He steals a car to go get Adam’s body.

Emma and Jason got to tell Adam’s family. His wife wants to know what happened but Jason cannot say. He died hero and he wouldn’t have if Jason went. He apologizes over and over.

The team gets Adam’s body and heads back. They shower before wheels up. Clay cries in the shower as blood runs off of him. Sonny punches the wall.

Emma tells Jason that she sees why he does what he does and he needs to go back to the team. Otherwise, he will just sit and rot. He hugs her. They tell one another they love each other.

On the plane home, Sonny declares that they are jinxed. Bad things just keep happening. Clay blames himself for Adam dying, he slowed them down. Ray tells him he cannot blame himself. Sonny stands and begins to recite the Seal Team Code.

They land and carry Adam off with a flag draped over his casket.