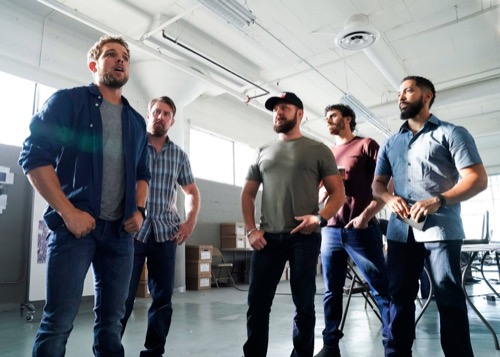 Tonight on CBS their new military drama Seal Team airs with an all-new Wednesday, November 21, 2018, episode and we have your Seal Team recap below. On tonight’s Seal Team season 2 episode 8, “Parallax” as per the CBS synopsis, “Jason and Mandy go undercover as a couple on vacation at an upscale nightclub in Mexico City in order to track on of Andres Doza’s cartel members.”

Doza is celebrating his anniversary with his wife Maria. They dance and kiss. He tells her has to leave for a bit. While walking out of the house he tells his associate he forgot it was his anniversary.

Doza arrives to see a man named Javier and his wife Gabriella. He is angry with them because they have mishandled his money and his drugs. He shoots Javier dead but spares Gabriella who is his wife’s sister. He tells her to tell Maria that Javier left her for another woman. She thanks him for not killing her. He sees her earrings and takes them for his wife. When Gabriella turns her back he shoots her dead.

Jason talks to Lopez. Lopez thanks him for coming after him. Jason knows they will get Doza and then everyone can return to their families. Jason sees Mandy and tells her he is sick of waiting on her.

Sonny tries to coach Clay who is still hungover on how to get over Stella. He needs to block her on facebook and get rid of all of her personal effects. Sonny admits he got all of his pointers from Cosmo. Ray comes in and tells them it was stupid they went out on the town. If they do it again he will tell Jason and jump in.

Mandy looks over bank statements on Doza that are managed by Carla. She notices that she has been withholding information. They talk to her and she reveals she has been comping for Luis Castillo, Doza’s most trusted men, second in command.

The team meets. Jason thinks they could cause a major problem to draw out Luis. They know just where to hit, a meth lab Doza runs. They plan to pose as an opposing cartel, wearing street clothes. They organize quick and hit the road. They make their way into the lab with guns blazing, taking out two male workers. Women scream. They head to the upper level and take down more men. They plant a bomb after announcing that they spit on Doza. They leave and the place blows.

Jason and the others return to the compound. Jason and Lopez talk. Lopez doesn’t want his sons to live like this forever. Jason tells him he needs to hang in there. They are going to get this done and they will all be safe. Meanwhile, the gang watches some tele novella. Sonny and Davis tease one another about their past romantic choices.

Mandy and Rita talk about how painful the wait is and talk about how they ended up in a job like this. Mandy talks about how she never knew her dad and her mother was a scammer. She was always in trouble.

Jason calls home again. They haven’t been calling him back and he is worried. Davis hears him leave a voicemail. She tries to make him feel better, they are teenagers. She asks him how he is holding up. He tells her he doesn’t know how to answer that. He is doing okay, he guesses. He needs to get Doza for everyone’s sake.

Ray sees Clay hitting the bag on the roof and wants to know what is going on. He has been off. And he wants to know why. Clay tells him about Stella. Ray tries to talk to him. He needs Clay to keep his head in the game. Clay thinks he needs to give his speech to Bravo 1.

Carla takes a call from Lazo, another one of Doza’s men, to set up a date for him tonight at her club. Mandy and Rita coach her and tell her she needs to stick to the game plan. They will protect her. The team meets and goes over all of it. Mandy thinks she and Jason should pose as a couple and go to the club to keep an eye on their man. They all agree to the plan and then look over the location’s exits an entrances.

Jason and Mandy head into the club. The seals wait outside. Mandy tries to apologize to Jason for doubting him and being worried. He isn’t buying it. She tells people what they want to hear for a living. Their conversation is cut short when Lazo shows up. He sits with his date for a while. Jason is getting antsy. Lazo takes a call and gets up. His date does too. They lose her. Mandy checks the bathroom. The woman shares with Rita who is also in there that Lazo left to meet with his boss. Jason runs for it and jumps into Ray’s car. They chase after Lazo. No-one likes this plan but they don’t know what else to do. A van cuts them off on their path. They try to go through them but cannot. Someone from a rooftop shoots a missile at them. The van explodes.