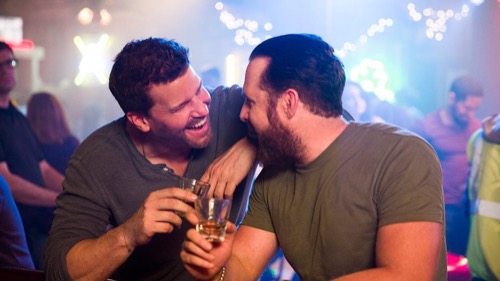 Tonight on CBS their new military drama Seal Team airs with an all-new Wednesday, March 7, 2018, episode and we have your Seal Team recap below.  On tonight’s Seal Team season 1 episode 15, “No Man’s Land” as per the CBS synopsis, “Jason and the SEAL Team close in on avenging the deaths of Echo Team when they find the money that funded their murder on a nearby poppy farm that was previously used to make heroin. Also, Jason meets an intriguing woman on the base.”

It’s been a week since the team took down the infamous bomber Aresh Kamal and so far the team hasn’t gotten anywhere with Kamal’s contacts on tonight’s all-new episode of “SEAL Team”.

They initially believed that they could follow the leads that Kamal had left behind to find out who ordered the hit on ECHO Team however they took down eighteen targets in seven days and not one of them has been willing to talk. They either said they weren’t terrorists or denied knowing Kamal altogether. But while his contacts were keeping their mouths shut, Kamal’s workshop was revealing all of his secrets. He had apparently hidden pounds of heroin in his walls and Ellis believed he might have been in that heroin to make the bomb that killed their own. She said ECHO Team had found a heroin field not long before they were killed and that they had been ordered to burn the whole stock, so that sounded like a motive.

Their fellow soldiers could have been targeted because they burned that field and forced someone thousands, maybe even millions, in revenue and so Jason and his team tried to follow the drugs. They went to a field where a man was allegedly growing poppy and, while they didn’t find the drugs, they did find the cash. There had been ten million in U.S. dollars and the farmer hadn’t wanted to tell the guys where he got that sort of money. He kept saying he didn’t know and so the guys suggested that they question the farmer’s wife. The poor woman would have been grilled for hours and so the farmer finally fessed up. He told the team that not long after the Americans had burnt that field, someone had come by and had deposited the money in his seller.

The farmer didn’t know where the money came from or who it belonged to, but it seemed his house was being used as a secret bank and so the team tried to figure out what to do. There had been some of them that joked around by saying they could invest in bitcoin or go to Las Vegas and there had also been the kid. Spenser suggested that they leave the money where it was and then wait for the bad guys to show up and collect it. Except there was one problem with that because they couldn’t leave the family in danger and they couldn’t remove everyone because then the house would look suspicious being so dark. The guys had had to think about the course they were going to take and they ultimately decided that their goal was to catch whoever that money belonged to.

They had called it in to get official permission and then they had stayed around waiting for their bad guys to show up. What they got instead was a boy. This boy asked them not to shoot because he was a “friend”. Meanwhile, Ellis had wanted answers of her own and so she pursued her theory. She later arranged a meeting between herself and an Afghani politician that she believed was dirty yet she couldn’t get a feel for him either way. He made himself out to be helpful and had even tried to flirt with Ellis because he told her that he hadn’t thought she would be so beautiful. Ellis for her part had shut that down as soon as possible and she had to let go of him in them because as far as he was concerned they were just having a meeting.

Jason’s team, however, had had better luck. The kid they had run into had claimed his name was Turan and that he lived on the farm next door. He said that he had gone to the caves because he had heard a rumor in town about there being cash hidden in the tunnels and he told the team that he thought no one would miss it if he took some of the money. He said he had a family to support and that they really needed the cash. The guys weren’t sure if they believed Turan’s story and so they again followed Spenser’s suggestion. He said that they should put a tracker on Turan’s moped and follow him to see where he went, so the guys did just that. They called it in and had gotten permission to “borrow” a car they saw to follow Turan.

They then followed this Turan to what they thought was a compound and it turned out to be Turan’s home though Turan wasn’t who they thought. The scared boy they had found had actually been a girl and she was pretending to be a boy as part of her cover. She was a middleman and raiding her home had been resourceful. She had been working for a man named Issad as a courier and he was a known terrorist. So they bought this girl in for questioning and Ellis threatened to reveal to Issad’s friends that she had been talking about him and so that got the girl to talk. Her name was Dorri and she’s been taking care of her brother since they were orphaned four years ago. She works for guys like Issad because she’s been secretly stealing from him in order to pay for a new life with her brother in America.

Dorri had also said that she was supposed to meet Issad that day and so Ellis decided to take a risk. She allowed Dorri to go that meeting wearing a wire and she had put her faith in the young girl because she told Dorri that she could help her financially. There had also been several conditions attached to Ellis agreement with Dorri and one of them had been Jason’s team. The team was going to follow Dorri to make sure everything went according to plan and under no circumstances could Dorri allow Issad to find out her cover was blown. She was supposed to show up to that meeting pretending everything was fine and she ended up doing just that. Dorri played things smart with Issad.

Issad had heard that the Americans were combing the neighborhood and had demanded to know what Dorri knew. She told him that the Americans hadn’t found the money yet and that they were checking all the farms because they knew about the money. Luckily, Issad believed Dorri’s story and he ordered his team to go get the money before the Americans found it. They moved out and had taken a whole team down into the tunnels when suddenly ran into the Americans. Jason’s team had been lying in wait and they took the shot the moment they got it. They just made the mistake of killing Issad as well. He could have been used to get more information about what happened to ECHO Team and so that had been a loss for them.

Only they still had Dorri. Dorri had gotten paid for handing over Issad and so she told the Americans that she could help them get even more bad guys if they promised to get both her and her brother to America. Jason had agreed to that arrangement despite not running it by his superiors and only later did he admit that he admitted that he promised he would try. Trying didn’t always mean certainty!