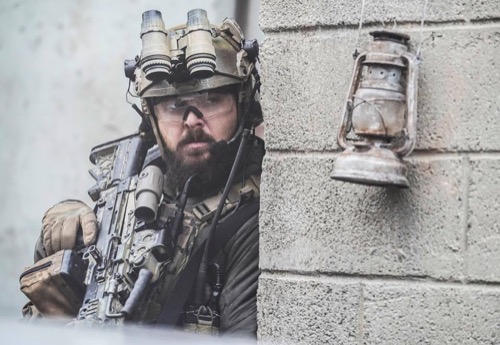 Tonight on CBS their new military drama Seal Team airs with an all-new Wednesday, May 2, 2018, episode and we have your Seal Team recap below.  On tonight’s Seal Team season 1 episode 20, “Enemy of My Enemy” as per the CBS synopsis, “The lives of Jason and the SEAL Team are in jeopardy when a risky mission to capture a highly valuable target may actually be a trap. Also, Clay and Davis commiserate about the frustrations of having long distance relationships, and Ray has a meeting regarding his involvement with the accidental death of the local boy that could affect his military career.”

Abad Halani had contacted Ellis on tonight’s all-new episode of “SEAL Team” because he wanted to offer up his brother Nouri Halani to the Americans.

Abad claimed he wasn’t like his brother. Nouri was allegedly responsible for the hit on ECHO Team and he had put their people at risk by going after such a target though Nouri didn’t see things that way. Abad said his brother wanted to rule the world and that he would never stop unless they stopped him, so Abad wanted the Americans to kill his brother. He was even offering to help them do it and so all they had to do was agree. Ellis had shared the intel that Abad had given her and she was willing to help him end his brother. She just had one question she needed an answer to before her side could agree to any sort of alliance with a Halani.

Ellis needed to know why Nouri killed an American team. She and others have questioned the whole poppy field theory. They knew that their brethren had burned down one small poppy field and so it hadn’t made sense why that one field would matter so much to Nouri. If Nouri did order the deaths of ECHO Team because of that, then there could be another reason why Abad wanted his brother gone and so Ellis decided to investigate the matter. She traced Abad’s call to Pakistan and had called her Pakistani counterparts in order to determine where Abad could be. She had wanted to see him for herself and so she traveled to Pakistan believing she could surprise him.

It turns out its impossible to surprise Abad when he has Pakistani officials on his payroll. Ellis went to Pakistan and Abad’s people kidnapped her within moments. They luckily hadn’t wanted to kill her and so all they did was bring her to Abad. Abad had wanted her to come to him because he too had wanted to talk face to face. He told her that his brother had overreacted with what he did and that he had become a liability. Abad said that he could lead his brother to a trap and that all she had to do was bring his offer to her superiors. Ellis hadn’t liked how he commandeered the conversation, but she was willing to see the upside to Abad’s proposal.

Ellis returned to base telling everyone Abad’s plan. Abad and his brother make a pilgrimage to the birthplace of their father every year and Abad had managed to convince his brother to go there now. He said his brother was already on the move and that he was going to claim to be sick at the last minute to ensure his brother didn’t back out. Abad had given Ellis the location and a timeframe. The rest was up to her side and she ended up getting their deal approved. The generals had approved of killing Nouri and they had wanted to do it using a drone. A drone was a lot safer than using Jason’s team.

Jason and his team just hadn’t agreed with that decision. They thought they should have been the ones sent in and they were griping about it. They thought it should have been their mission seeing as they had been handling everything for a while now and so some of them naturally had their complaints yet Jason hadn’t been one of them. He instead had been a little preoccupied. His friend Steve Porter had been on the ECHO Team and Porter had taken a sample of the soil deposit from one of the tunnels underneath the poppy field to get it tested. He had handed over this sample to Amy at Xeon Tactical and the company claimed they hadn’t found anything important.

Jason, on the other hand, had thought that sounded a little too convenient and so he had the soil tested by someone he trusted who later told him that the soil was heavy with lanthanum. Lanthanum was in everything and could make whoever was left standing in such a field very rich, so that started to make Jason question if Nouri Halani really did kill his friends. He was one of the people that thought one poppy field wouldn’t have bankrupted the Halani family and so he asked Ellis what if the ECHO Team had been killed by American private contractors that thought the fallout was worth the risk in this case.

Ellis had thought that was a bit much and she had asked Jason if he at least talked to the people at Xeon Tactical. He had talked to them and Cutter who ran the company had claimed that it hadn’t been enough lanthanum worth mentioning. He said his people had looked and they hadn’t found a vein however Jason hadn’t believed him and he told Ellis this. Only Ellis didn’t think he was right and more importantly, they had to worry about a drone. The team went to watch the drone strike and unfortunately, the drone was canceled at the last minute because the generals hadn’t wanted to sign off on anything with too many civilians on the ground. And so that was that.

Brass didn’t want to take risks and so Jason convinced them that his team wouldn’t be a risk. He said if they moved fast enough that they could apprehend Nouri Halani rather than kill him. He said bringing him in alive would ensure they wouldn’t draw too much attention to themselves and allow their own to question him, so eventually, General Cook gave them the go ahead. The team had flown halfway to the village and had walked the rest of the way which meant no one heard them coming. They then used that to their advantage by quickly taking custody of Nouri Halani and so they were moving him to the helicopter when Jason decided to ask Nouri a few questions.

Jason asked the other man about Cutter and Nouri had actually recognized Cutter’s name because he called him “the Englishmen”. Jason had wanted to know how Nouri knew Cutter and unfortunately, they hadn’t time for that because they learned that several men were on their trail. They had landed in the heart of Taliban country and the men were moving. So the team raced back to the helicopters and they were making their escape when a missile came out of nowhere.

That missile took down one of the helicopters and there was no telling who survived.