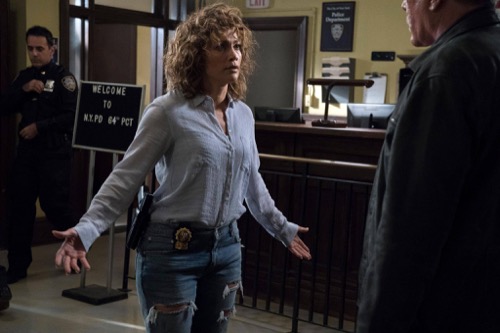 Shades of Blue airs on NBC tonight with an all new Sunday, July 15, season 3 episode 5 called, “The Blue Wall,” and we have your weekly Shades Of Blue recap below. On tonight’s Shades of Blue season 3 episode 5 as per the ABC synopsis, “Harlee discovers that the intelligence unit’s involvement in criminal enterprises goes deeper than she thought. Ramsey strikes back. Tufo pulls away from the crew. Loman meets a girl.”

Loman, Harlee and Espada arrive on the scene to find Tufo holding his bleeding brother. Feet away, Woz is beating one of the men. They were ambushed. On the way to the hospital, Harlee tells Woz Cole told her about the ambush.

At the hospital, they rush Wallace in to the ER. Harlee starts to panic and struggle as she remembers what she went through. She starts to hyperventilate and leaves the hospital.

Tufo gives blood. He tells Woz he regrets not stopping Wallace from helping them. Meanwhile, Harlee calls Cole on a burner phone. Stahl watched her as she goes into her house.

At the station, Harlee thinks they need to use the rich international they have in custody as leverage against Ramsay so they can figure out who ambushed Wallace.

Harlee’s daughter is on her way to a study group when she is pulled over by Intelligence. They make her get out of her vehicle and take her into custody after they find a bottle of pills in her bag.

Loman makes a friend at the hospital named Diane. Meanwhile, Ramsey comes in to see Harlee’s daughter in a cell and tells her she can make a phone call.

The rich international is transferred into federal custody. Woz asks Harlee to go see Wallace at the hospital. Woz heads to see Christina. He speaks with Ramsay who didn’t know the international was taken by the feds. He gives up Christina but tells Woz they didn’t plan anything on her. He might want to deal with that.

Harlee pushes Wallace to ID Intelligence at the hospital. Tufo gets mad. He doesn’t want to see his brother killed.

Harlee gets a text to meet up. Woz brings Harlee’s daughter home. Loman goes out for a walk with Diane. They go back to her hotel.

Harlee meets with Cole at a pool. She gets in for a swim. Cole tells her all about himself and a new partner Ramsay has that is pushing him further into the dark side. Loman is on the bed kissing Diane when she pulls a gun. They fight. He knocks her out before she can shoot him.

Woz and Tess show up to help Loman. They discover she was sent from the cartel as revenge for the rich international.

Harlee goes in her home. A man in a van gets out and is ready to shoot her from a distance when Stahl comes out and grabs him.

Cristina confesses to Harlee that she has been taking study buddies and that Woz helped her get out of custody.

Woz calls Harlee and tells her that Ramsay is in bed with the cartel and the rich international Harlee tried to take down is part of them. Harlee breaks into the home of the Intelligence Agent she thinks killed Nava. She finds Nava’s book and knows he did it. She heads to Intelligence and confronts him. He laughs at her. Woz shows up and tells her to walk away. As they leave, the agent calls Nava a b*tch. Woz gives her the go ahead. She arrests home on the spot.