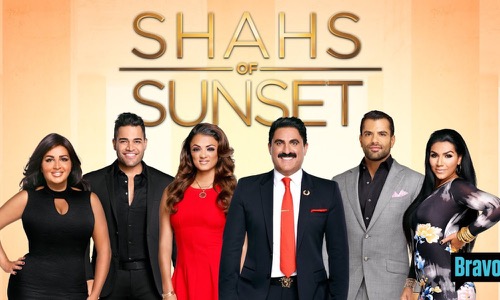 Tonight on Bravo, Shahs of Sunset continues with an all-new Thursday, August 2, season 7 episode 1 called “A Short Kiss Goodnight,” and we have your weekly Shahs of Sunset recap below. On tonight’s Shahs of Sunset Season 7 episode 1 as per the Bravo synopsis, “In the Season 7 premiere, Mike, having finally begun to move past his marriage drama, is single and ready to mingle with new crush Mona, who he invites (along with her brother Nema) on a trip to Big Bear. Nema, meanwhile, only has eyes for GG, who is still in the middle of a contentious divorce. On the group trip up to the mountains, the Shahs work to maintain their balance on the slopes and back at their shared house.”

The show opens with GG in her condo packing to go skiing. Then MJ is shown talking to Mike on the cell phone telling him she all ready to go. Destiney is shown in her closet picking out clothes to take on the ski trip. Adam helps Reza get packed for the trip as well.

Reza talks to the camera about the new house he and Adam have purchased and are renovating. He is stressed about how much it will cost and the fact that Adam wants to have a baby. They have been told it will cost over $100,000 to make their dream of a baby come true. Reza is feeling the baby pressure and complains he is spread very thin. He is looking forward to the ski trip to get away for all the baby talk.

The whole gang loads up into a luxury van and start drinking. Reza says he hasn’t been skiing in over 20 years. MJ feels like there is a lot less tension since Asa is not joining them on the trip. A flashback is shown where MJ calls Asa’s son a bastard child. MJ tells the camera she and Reza are so much closer now that Asa isn’t around as much.

They arrive at a beautiful cabin Reza rented for them because he couldn’t find a 5-star hotel. They are greeted by their personal chef. Mike is excited to get a room to himself that he hopes will lead to a romance with Mona.

GG gives Destiney an update on her divorce. Shalom still has not signed the papers and she is frustrated. She says she is done with him but also says diamonds are forever. Destiney tells the camera she can see through all of GG’s BS and they both are like little girls who just want to be loved.

MJ call Tommy and he tells her he loves her so much and can’t wait to marry her in less than three months. Even though MJ’s dad is still very sick they have decided to move forward with the wedding.

Mike tells the group that he is done being the crazy guy he was right after his divorce and is now ready to settle down and have a family. GG and Mike flirt during and after dinner. Reza and MJ tell GG they are sharing a bed and room together. MJ then makes a nasty comment about GG’s marriage and she leaves offended.

Mona and her brother Mena arrive at the cabin. He immediately shows an interest in GG and Reza tries to play matchmaker between the two. The group gets ready to hit the slopes but Mona lets it slip that Mena has a girlfriend. He tells the camera that he does have a girlfriend he has been with for a year and a half but that he never had a chance to be single and have fun after his divorce. It is obvious to the group he is a player.

Destiney is not excited to ski since she hasn’t been on the slopes since she was 13 but says she is no pussy so she jumps on the lift. GG and MJ hope on a lift together and laugh as Destiney falls over and over again and she heads down the slope. Both MJ and GG hit the diamond slope and have no problem making it down the mountain. They both comment that Mona and Mena seem too close for being brother and sister and they think they are creepy.

The group stops for lunch and starts drinking. Mena is grossed out by the way everyone shares food and Mona tells the group neither of them speaks Farsi. No one can believe it. They tell the group that their parents divorced when they were very young. Mona moved to New York with their mother and Mena stayed in LA with their father. They did not see each other at all growing up and have just recently reconnected.

They all return to the cabin to get ready for the night. Shervin is there when they return. The group starts doing shots. GG is worried that if she flirts with Mena Mike will tell Shalom. Shervin tells her to just go to dinner and have fun. Destiney watches Mona and Mena talk and thinks they have a really weird vibe between them.

Reza planned for GG, Mike, Mona, and Mena to go out for a very nice dinner while the rest of the group stays at the cabin. GG begins by telling the group that hin her next relationship she just wants a baby. She just needs a man for the sperm. Mike says there is no way she will find a guy to agree to that but Mena chimes in that he would be up for that. GG tells the camera she just looks for a guy who is healthy and wealthy. Mena is obviously healthy, maybe a little skinny but she is not sure about his wealth. She just wants to be pregnant by this time next year.

Back at the cabin Destiney and MJ sit outside. MJ tells her she needs to let her wall down. She tells her she needs a tinder profile so she can just swipe and chat. Mona tells the group at dinner that she wants to get married and live in LA but wants to have her kids spend their summers in Europe. She wants to hire someone to homeschool them. Mikes tells her she needs to marry a very rich man. He tells the camera he doesn’t think she is the one for him.
MJ and Reza talk in bed and she tells him she wants him to be her man of honor at the wedding. He is thrilled. Back at dinner, Mike asks Mena why he is flirting with GG if he has a girlfriend. He says because she is so beautiful. She is flattered.

The group returns back to the cabin and tell the group Mena and GG vibed really well but Mike tells them he and Mona didn’t click. Reza tells the camera if a woman doesn’t worship Mike in the first ten minutes he writes her off. Mena wants to make out with GG bad and asks her to come outside with him. He asks her to a friendly dinner when they get back to LA. He then asks to kiss her but she says dinner first and laughs nervously. He likes that she is nervous.