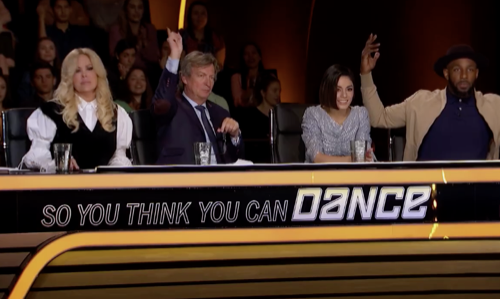 The search for the most talented dancers continued in the city of Los Angeles on tonight’s all-new episode of “So You Think You Can Dance”.

Things were a little tenser behind the scenes this season. The show had done away with the choreography round and therefore everyone was only going to get one chance to impress the judges. The judges tonight were the same as last time. There was Mary Murphy, Nygel Lythgoe, Vanessa Hudgens, and the show’s very own alumni Stephen “Twitch” Boss. Somehow this show brought them all together and all they wanted to do was give someone a chance to shine. So the first person they got to do that with was Tessa Dalke. She was from Hanford, Connecticut and was a Contemporary dancer. She was young, humble, and it turns out extremely talented. She wowed everyone and received a standing ovation from both Nigel and Mary at the end.

Each judge voted “yes” for Tessa because she was just that talented. The judges would still remember her long after the moved on to judging others. The next person that the judges saw was Jay Jay Dixonbey. He was from Detroit, Michigan and he danced Jazz. He sort of grew up in business and he actually tried out on the show during a previous season however he was eliminated during the choreography round and so he came back to redeem himself. He went out on the stage and showed the judges something they all appreciated. They saw Jay Jay give attitude! He was talented and he knew it. And so the judges truly enjoyed his dance because he gave them something on that stage and that’s why they later voted all “yes” for Jay Jay.

But not everyone was going to win over the judges. Some split them down the middle like the duo act that came next. Nathan Hughes and Courtland Davis were both from South Carolina and they met when they joined the same dance group. They were Hip Hop and they later threw in some impressive stuff in their routine. It’s just the judges thought that nothing stood out to them. They were waiting for a signature move and never got that. Not even with the play fighting that they saw and so the judges all asked them to work on that. Later on, three of the four judges said “yes” and so the guys were still going to the Academy only going forward they knew what to work on if they wanted to stay on the show and maybe that will affect their next performance.

The next dancer that the judges saw was Hannahlei Cabanilla. She was from Anaheim Hills, California and was a Contemporary dancer. Hannahlei used to be really shy and so her family got her into a dance class to sorta help overcome that though what they didn’t expect was how long it took her to overcome her shyness. She was learning to dance while still extremely shy and had been so afraid to tell anyone that she needed to use the bathroom that she went up onstage dancing her routine except she kept dancing even as she started peeing on herself. So it was a great day when she finally started speaking up and fast-forward to her routine tonight she was giving amazing technique.

Hannahlei took her time and wowed the judges with the skill in each and every movement. She was great up on that stage and Vanessa became a personal fan of hers to the point she didn’t hesitate to say “yes”. Thankfully, the other judges had also said “yes” as well and so Hannahlei was going to the Academy. The judges all loved her and expect great things from her. Only it was CJ that moved them to tears. CJ Butler was from Geismar, Louisiana and he was a Hip Hop dancer with the addition that he danced his own version of Hip Hop. CJ explained that he likes to dance with a message because dancing helped him get through some tough times. And so Twitch asked him about his experiences because they all wanted to know what happened to this young man that changed his outlook.

Sadly, CJ lost his mother. She was killed three years ago and he still clearly deals with her loss the best way he can. He channeled all that pain into dance and that has helped slowly recover from not only losing his mother but also his best friend. He would go on to dedicate his routine tonight to her and the judges thought it was a beautiful tribute. There were still a few things CJ needed to learn before he could advance to the Academy and so the judges asked CJ to focus on the positives. They wanted to keep dancing and they all cried with him when they told him that he could come back because they really did love meeting him. And so it was with a sad heart that CJ left, however, he was still glad for how far he came.

The next person to hit that stage was Dustin Payne. He had once made it to the ballroom round on the show when he got eliminated yet he was back having learned a thing or two. Dustin never stopped practicing and he came back a stronger competitor. He was still an Animator and he threw in a few new things that seriously impressed the judges. They were glad to see how far he had grown and even happier when they gave him the ticket to the Academy. So seeing Dustin again had truly been a gift and what the judges didn’t know at the time was that there was one more familiar face waiting for them. They were later shocked when Benji came back to the show and he was sort of older than allowed age group. And so it made sense that he was only back to support his dance partner.

Benji dances with Nicole Clonch. She was from Highland, California and she dances a little bit of everything although tonight she showed off this ever-improving West Coast Swing Dance. There weren’t a lot of dancers that could hold their own with Benji or even draw the eye back to them with him on the stage and she did that. She was a great dancer and she showed how easily it was for her to adapt to whichever form of dance that was required. And so the judges loved saying “yes” to Nicole because they knew she was capable of surprising them.