BY Kristine Francis on July 30, 2018 | Comments: Leave Comments
Related : Recap, So You Think You Can Dance, Television, TV 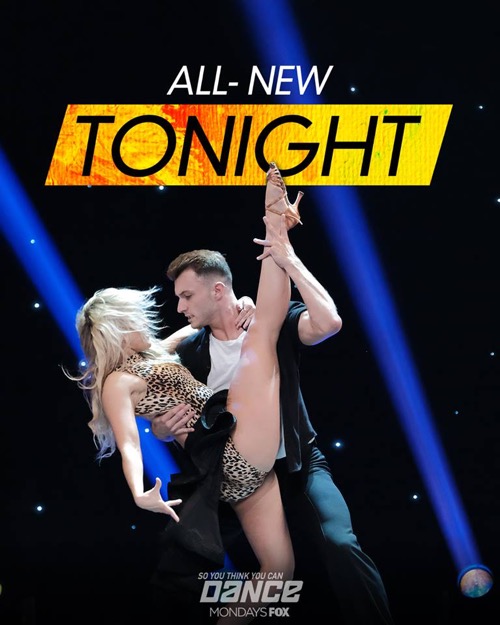 Tonight on FOX their Emmy-Award Winning So You Think You Can Dance premieres with an all-new Monday, July 30, 2018, season 15 episode 8 episode and we have your SYTYCD recap below!  On tonight’s So You Think You Can Dance season 15 episode 8 as per the FOX synopsis, “The Top Ten men take the stage, each partnered with an All-Star girl for a choreographed duet outside their own style. They have the chance to prove to the judges and America why they should move on in the competition.”

It was the guys’ turn on tonight’s all-new episode of “So You Think You Can Dance”. They were put through the same test as the girls and received the same nasty shock when they realize they were just one more cut to go before the live shows however tonight wasn’t about getting caught up in your own head.

It’s do or die time and there were some of them that had the added advantage of being well-liked. Cole Mills had been frontrunner since Academy Week because the judges loved how well he could adapt to other styles of dance and so the only time he had let them down during that week had been his solo. His solo was called disingenuous because it seemed like he styled his face to go along with the dance.

The criticism at the time had been set back from him and had been advised to get out of his own head. And, well, he struggled with that at first. Cole was a Ballroom Dancer and had even been given a beautiful Contemporary piece by Travis Wall no less, but during practice, he had second-guessed everything he did and so Travis took him aside.

He explained that this was a duo, not a solo and that Cole’s sole focus should be on his partner. It was only by working together that they could pull off the piece and therefore Cole ended up following Travis’s advice.

He got out of his head and did do the piece justice. The judges for their part had just been so happy to see their faith in Cole rewarded that they practically told him he was a shoe-in with their reactions to his performance. The judges had clear favorites tonight and the next contestant to dance had been one of them.

They had loved Jay Jay Dixonbey and had even found a way to love his ballroom performance during Academy Week. Ballroom had been the only thing Jay Jay had struggled with and one of the reasons he made it through that round was because he faked it until all the judges saw was the great chemistry he had with his partner.

They didn’t mention his stumbling back then and unfortunately they noticed it tonight. Jay Jay was a Contemporary dancer and he had been given a Ballroom piece yet he committed the same mistakes and as the judges found themselves talking to him afterwards they realized he hadn’t improved by much.

Jay Jay was great with everything else and so his weakest style was very much Ballroom. The judges still liked Jay Jay and that meant they could go either way on him. Jay Jay wouldn’t be finding out the answer about whether he made it until the very end and so it was onto the next dancer.

Slavic Pustovoytov was a Hip Hop dancer and he had been given a Contemporary performance for tonight though odds are no one ever expected he would do so well. He had more or less skated through Academy Week because there wasn’t any outright praise or even criticisms.

So he didn’t really stand out until he gave an amazing performance. He had showed he could dance Contemporary and that he could connect with whoever he partners up with, which could help later on in the competition and so the judges commended Slavic because he stood out on the night he needed to stand out.

His performance had been such a surprise for them because it had been so sexy and they hadn’t thought he could bring that until they saw it for themselves. They had been left happy with Slavic because he threw them in a good way and not every performance was like that.

Justin Pham had been next. He was a Contemporary dancer and tonight he had been given a Hip-hop performance, bit he hasn’t exactly had a flawless time of it during this season. He had tried out on a previous season and had gone home during Academy Week because of the Ballroom performance that had been especially embarrassing for him because his parents taught Ballroom. He said that he had practiced since then and in truth, he did come back a stronger Ballroom Dancer. Its just he wasn’t very good at Hip Hop.

His performance was more sweet than fierce and so it didn’t seem like Hip-Hop. The judges had been a little disappointed in the performance and considered it one of Justin’s worst. And tonight hadn’t been his night, it’ll just be unfortunate he got cut again before the live shows. Peyton Albrecht had also struggled tonight. He was a Contemporary dancer and had given a Ballroom performance tonight however he’s been down this road before.

He’s tried out several times in the past and that didn’t always out, so he practiced and was flawless during the Academy Week because it seemed like he had no problem with transitioning to different styles. Only no one expected that he would have a problem connecting. He was great at the technical stuff and so if he had only looked at his partner with some kind of emotion he could have pulled it off. He just wasn’t able to connect and so the judges found his performance dragging.

They told him he wasn’t connecting with his partner or with them and so he warned that could cost him everything he’d been working for. Kyle Bennett Jr had been next. He was an Animator and tonight he gave a Contemporary performance. The performance hadn’t been clean because there were some mistakes thrown in and the judges still enjoyed it because of the emotions he put into this one piece.

They more than saved the performance to them and the judges had been really proud of how far Kyle had come. He had almost made it on the previous season to the live shows and had gotten cut because he suffered a setback during Academy Week. The fact he had come back from the encounter with newfound experienced and was a better dancer because it, easily made him someone the judges could cheer for. They were just as proud of Dustin as they had been of Kyle because Dustin later showed him how much he learned as well.

Dustin Payne was an Animator and he had a Jazz performance tonight yet what made this performance so memorable had been the blending of the styles. Dustin combined some of his Animation with Jazz and it gave a unique performance that no one else could give. It also made Dustin stand out one of a kind and so that had been a great move on his part.

The judges remembered why they love Dustin and it kept him in their thoughts as they began to wind down with the performances. The next dancer had been Evan DeBenedetto. He was the last Tap dancer in the finalists and he had given a Contemporary performance tonight. He had been one of those that had coaxed through the Academy Week and with this one performance, he managed to stand out just enough for the judges to be truly impressed.

Unfortunately, others didn’t always make the best impression. Allen Genkin was a Ballroom dancer and he had given a Jazz performance thought for some reason he let his nerves affect him. He got into his own head and he disconnected from the dance. The judges felt he had given up before he walked out on the stage and that’s what they took notice of when it came to making decisions.

The final performance of the night had been given to Darius Hickman. He was a Contemporary dancer and the judges felt like he wasn’t showing his personality. So he asked his dance partner as well as his choreographer for tonight to help them show off his goofy side with their Hip Hop routine.

He wanted the dance to be a reflection of who he was and it was so well down that the judges appreciated finally getting to meet someone they could truly root for. Hence when the judges decided, they chose to go with the guys they believed were the strongest. They picked Evan, Jay Jay, Cole, Darius, and Slavic for their Top 5!