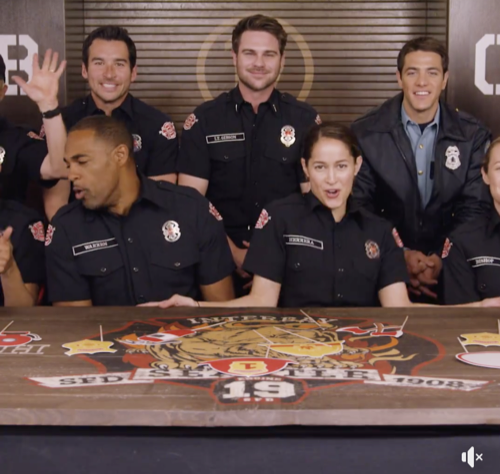 Tonight on ABC Station 19 returns with an all new Thursday, March 22, 2018, season 1 episode 1 & 2 premiere called, “Stuck – Invisible to Me” and we have your Station 19 weekly recap below. On tonight’s Station 19 episode as per the ABC synopsis, “The premiere: When the team responds to an apartment fire, Capt. Pruitt takes a hit, the future of the station’s leadership is in jeopardy and firefighter Andy Herrera is forced to step up. Meanwhile, new recruit Ben Warren is trading in the scalpel for a fresh start as a firefighter, but it hasn’t been easy and he has a hard time realizing that emergencies in the field are vastly different than those at Grey Sloan Memorial.”

Tonight’s Station 19 season 1 episode 1 and 2 looks like it is going to be great and you won’t want to miss it.   While you’re waiting for our recap make sure to check out all our TV recaps, news, spoilers & more, right here!

A woman puts her laptop on her pillow and then goes to the bathroom. It starts a fire. The team of Station 19 arrive. They travel through the house and find the woman on the floor of the bathroom. They bring her out while the rest of the team begins trying to put out the fire. They get word that someone else is inside. They hear crying. They find a cute puppy named Charlie.

The chief and the team sit down for dinner. Ben is the new guy and nobody will let him forget it. Andy and Jack slip away. They kiss in another room. She discovers the ring he has on him. It is for her. He tells her she wasn’t supposed to see it. She freaks out. They get a call. They arrive on the scene. Andy is mad that the officer on the scene left his car right in front of the hydrant. She pushes it with the fire truck. She doesn’t care who is in the way, they need to move.

The team has to put out the fire in the entrance. They get in. There is low visibility. They start checking rooms to make sure no one is in the building. Jack radios to the chief but he isn’t answering. They can’t find him. They begin going back to the rooms. Maya calls to Andy. The chief is on the ground. He isn’t breathing. Smoke pours into the room, blanketing them. There is an explosion. They can’t exit through the door. If they break the window it will ignite the room. They began performing CPR on the chief while another creates an anchor point in the wall. Andy tries to get a pulse. The door is on fire. She finally gets a pulse. They start to make their exit out of the window after they break them and jump. They land on huge nets outside. The paramedics take the chief away. Andy lashes out at Jack when he asks her if she is okay. The officer comforts Andy

Ben gets in the ambulance and begins treating the chief. The paramedic gets upset with him. He can’t treat him like he is in the OR. They are only allowed to do so much. He is brought to Seattle Grace. Bailey takes him in and starts working on him. In the hallway, Andy and Jack fight. He thinks she is mad about the ring. She is mad because he left her dad in the middle of the fire. Jack walks away. Meredith comes to talk to Andy. She brings her to another room. Andy breaks down, crying uncontrollably. Meredith tells her that is enough crying. She needs to put her game face on and go be brave.

Later, Meredith and Bailey report back to the team. They pull Andy aside. Her father has cancer. Andy goes to talk to her father. He tells her he has known for a while. He needs to step down. Jack will be in charge. At home, Andy grabs a beer and does some laundry. Her doorbell rings. It is Ryan, her cop ex-neighbor and ex-boyfriend.

He asks her if she is okay. She rambles, everything is wrong. Ryan thinks she should be the new chief not Jack. She’s also mad that her father would keep this from her. She cries. She cannot bury another parent. She kisses him. He tells her that she is drunk. They kiss again.

Bailey is at the station. Ben shows her around. He is glum. He messed up the night before. She reassures him to stop showing off and just be good. Meanwhile, Jack talks to Maya about the ring. Andy comes in but sees him and leaves. He doesn’t see her. He tells Maya that he loves Andy. Is it so bad he wants to marry her?

Maya and Andy meet up outside. Andy vents. She slept with Ryan and then kicked him out. Maya laughs. She thinks Andy needs to keep her eye on the prize.

Andy and Jack meet Ryan at the scene of an accident. A teen girl was drunk the night before. She decided to take a short cut between two brick buildings so close together she got stuck. She was there all night. Andy has to calm her down as she begins to panic. Andy gets her through and out.

Ben meets with his coworkers. He tells them he wants to be a part of the team, a fire nerd. “It sounded good in my head,” he tells them and starts to walk away. They smile and call him back.

The chief tells Jack and Andy that they will both run the station until one of them is chosen. Jack is surprised and unhappy. They head back to the station and talk to the team. Andy gives them a pep talk. After she tells them they can use the pole. They all head to use the pole, something the chief wouldn’t let them do.

A young couple is in bed kissing. She cannot concentrate on him because the smoke alarm keeps beeping. He tells her it is just the batteries. She still can’t get into them. He smashes it with a bat. Meanwhile, Ben is dropping his son off at school. He isn’t happy his dad is going to be gone for the night. Dean begs the dog Charlie to let him sleep. Andy argues with her dad. She is going to take time off to take him home from the hospital.

Jack and Andy meet with the female battalion chief. She tells them how their evaluation if going to go. It is going to be challenging but whoever makes it through will be chief. They start by each running training drills with the team.

The battalion chief is there watching. Ben screws up. Dean shows up late. Andy reprimands him. He is working reception today. A call comes in. Dean begs to go but Andy isn’t giving in. Maya takes the wheel. They head to the local school where Ben’s kid goes. They meet the principle. She talks to Jack, assuming he is the one in charge, but Andy is running the shift.

Ben and the others perform a sweep. Ben sees his son inside the school. He asks him why he isn’t outside. He pulled the alarm. It was the fastest way to get him there. He leads his dad into the bathroom. There is a young girl there. She is pregnant on the floor and in pain. She is crying. She is the principle’s daughter. Her mom doesn’t know she is pregnant. Ben’s son tells them he has been timing the contractions. Ben is surprised. She is fully dilated. They check her blood pressure and make her comfortable.

Dean takes calls in between making castles with pencils. The young woman from earlier in the morning comes in. She wants help with her smoke detector.

On the scene, Ryan and Jack talk about Andy. Meanwhile, Dean works on the smoke detector. Ben radios to Andy. He needs the aid car. She tells him she sent it away. She calls back to the station. Travis and Dean are heading out to another incident. The principle asks Andy why she is calling a medical car to the scene. Andy scrambles to answer. Inside, they work to help the young girl give birth. She is scared and resisting. The baby comes out still in the sac. The baby isn’t breathing. They break the sac and clear the airway. The baby cries.

Travis and Dean arrive at a nursing home. They help an old lonely man who needs their help on a weekly basis. Travis sees right through it. The man is lonely. Travis tells him how he is lonely too since his husband died. Dean cheers him up by telling him about the neighbor lady who was asking about him.

At the station, Andy is doing paperwork in her dad’s office. Jack comes in and asks her how she feels. They get to talking. Jack refers to her as friendly competition. He can give her pointers if she needs them.

At the station, Dean and Travis are arguing about Dean’s need to check on Charlie. Ben wants them to go to bed so he can. They get a call. They have an overturned tanker. They have two victims, one is unconscious the other is stuck in the car. Ben notices the rig is hot. Andy yells to get them away from the rig. A blue fire ring develops. Part of the crew is stuck on the inside.

Andy warns that water will make it spread. Jack wants to use protein foam. On the other side, the crew works on the man that was in the tanker as they wait to get out of the fire. It is hot. They take turns with the oxygen mask. Jack and Andy argue about what they should do while they wait for hazmat. Andy decides, they will drive the truck into the flames, grab them and go. It works.

Back at the station, the chief comes in to visit. Ryan picked him up. They are all happy to see him. He is so proud of them. Ben’s son shows up. He gets a call. His son doesn’t get mad. He tells him to go.

Jack and Andy find themselves alone and flirting. They tease each other.