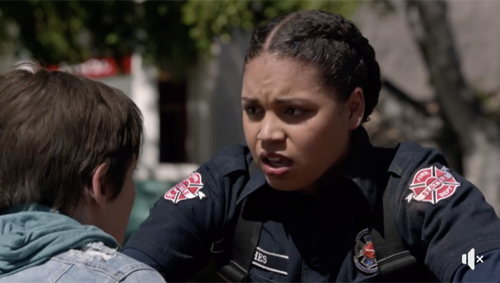 Tonight on ABC Station 19 returns with an all new Thursday, April 26, 2018, season 1 episode 7 called, “Let It Burn” and we have your Station 19 weekly recap below. On tonight’s Station 19 episode 7 as per the ABC synopsis, “Ryan tags along to a disaster drill training at Station 19 where he and Jack get competitive. Captain Pruitt’s health weakens and Andy is sticking by his side. Meanwhile, both the firehouse crew and police department respond to a strip mall fire, forcing Jack and Ryan to work together.”

Tonight’s Station 19 season 1 episode 7 looks like it is going to be great and you won’t want to miss it.   While you’re waiting for our recap make sure to check out all our TV recaps, news, spoilers & more, right here!

Bailey comes in to see Pruitt. He wants her to help him with a quick fix. Bailey wants to give him a full workup. Pruitt doesn’t want to be admitted. He gets up and leaves.

Pruitt comes home to Andy. He tells her he has been with a poker friend. She tells him about her test. She was ranked dead last out of 20 candidates.

Andy vents in the truck to Maya the next day. They head to a bridge where the homeless are living. Maya’s brother is there. He tells her he is fine, he hasn’t been using. He’s been painting again. She needs to get off her high horse.

Travis and Vic arrive at yoga. Travis sees an acquaintance who hits on him and gives him his number. Ben and Bailey walk in the firehouse together. She asks where Pruitt is. Ben wants to know why she is asking. She speaks in code to him about Pruitt while emphasizing she cannot divulge much since he is her patient.

The team wonders what they should say to Andy about ranking last. She arrives and notices their behavior. She tells them not to feel bad for her. She gives them the rundown for the day.

Donald and Ben pull Pruitt aside about him hiding his symptoms. He tells them to back off. He almost falls when he gets up. Andy comes in. They tell her what is going on. She wants to bring him to the hospital.

At the hospital, Pruitt has been admitted. He is in bed, Bailey comes in. His cancer is progressing and the treatment isn’t working. She wants to increase the potency of his treatments. Pruitt and Andy start fighting. Andy thinks he is not taking care of himself.

Vic and Travis visit Edith. She is having trouble breathing. She asks him about yoga this morning. She knows her grandson gave him his number. She wants to know if Travis is going to call him or not. He is a catch. Her grandson comes rushing in. She has set them up.

Pruitt tells Bailey he can handle the treatments. Meanwhile, Ryan comes to the firehouse expecting to see Andy about a drill they will be working on. He gets Jack. The two are touchy with one another.

Travis tells Edith’s grandson he will go out with him. Later, Travis and Vic meet with Maya so Vic can do some drills to get over her fear of fire. She panics during the drill. They get a call. Meanwhile, Jack and Ryan are fighting about Andy.

Pruitt and Andy talk. He tells her he needs his space. She can’t give him that. She promised mom she wouldn’t. Meanwhile, Jack calls all of the crew out. The fire is out of control, toxic and the building is going to collapse. A woman holding a crying baby emerges on the roof.

Andy tells Pruitt about a fun day she had with her mother when she was younger. It was on that day she promised she would look after her father if something bad happened. She begins crying and tells him not to shut her out. Monitors begin to beep.

Jack works to reach the woman on the roof. Ryan yells at her to throw her baby to him. She doesn’t think she can do it. Jack tells her to do it. The flames are coming fast. The building is going to collapse. She kisses her son and throws him over the side. Ryan catches him while Jack coaxes her to jump to him. She does it.

Bailey tells Andy that Pruitt is going to be fine. He had an allergic reaction. He tells Bailey he wants to keep going.

Jack and Ryan shake hands. Vic walks to the flames as the building burns. She feels like it is helping her.

Maya returns to the bridge to bring her brother soup, food, and paint supplies.

Edith’s grandson shows up at the firehouse. Travis tells him he doesn’t date but changes his mind after Graham paints a picture of what they can do together; breakfast, long talks, a casual dinner.

Ben arrives home to see Bailey. He smells like a chimney. She wants to talk. They cannot shut each other out. He tells her in great detail about what work has been like.

Andy wakes in the morning. Donald is there to keep Pruitt company. Pruitt sleeps. Meanwhile, Vic and Maya run by the bridge. Her brother painted a beautiful Muriel. Ryan shows up at Andy’s and tells her about his night. They kiss.