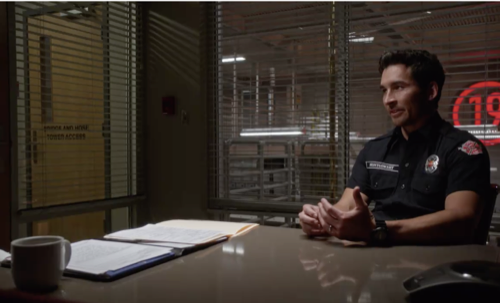 Tonight on ABC Station 19 returns with an all new Thursday, May 10, 2018, season 1 episode 9 called, “Hot Box” and we have your Station 19 weekly recap below. On tonight’s Station 19 episode 7 as per the ABC synopsis, “In the final days before the Station 19 captaincy is announced, Pruitt warns Andy not to be disappointed with the outcome of the race. Meanwhile, Ben gets upset with Pruitt for having told Bailey the dangers of firefighting; and the team gets trapped inside the garage of a burning house, putting several lives at risk.”

Tonight’s Station 19 season 1 episode 9 looks like it is going to be great and you won’t want to miss it.   While you’re waiting for our recap make sure to check out all our TV recaps, news, spoilers & more, right here!

A couple has a fire going with no screen in front of it. A spark pops and leaps onto the rug while they are in the other room discussing their decision to divorce.

Dean is meditating. Warren comes in and laughs at him. He accuses him of really trying to sleep. Andy, Maya, and Victoria are all talking. Andy has ordered some new gadgets for them. She is excited. Maya can’t wait for when Andy is their chief. She tells them how Ripley told her she should go up for lieutenant.

Ben thanks Pruitt for telling Bailey the truth about the dangers of their line of work. Pruitt goes to see Andy. She is working out. She has a lot of extra energy as she waits to hear if she will take over the station. Pruitt tells her that she needs to be ready for bad news just in case.

The team gets a call to the house where a couple has a fire. Dean is in the house trying to punch in the code to their alarm while the team and the wife are in the garage. He forgets the number and radios to Jack who doesn’t get the message. Their radios aren’t working. He punches in the code wrong too many times. The garage door shuts, locking Maya, Andy, Jack, Ryan, another officer and the wife inside. The team tries to open the garage door by bashing it with their axes. The wife tells them it is made of reinforced steel.

Outside, Vic tells Dean he didn’t change his walkie to the right channel and that is why Jack cannot hear him. Inside the garage, Andy is creeped out that Ryan and Jack is a buddy. Maya complains about it being so stuffy in there. Outside, Travis works to get the jaws of life ready.

Ryan’s female officer and partner tell Andy and Maya she is getting signals from Jack. She is going to have to let him down. They find a jack in the car trunk and try to use it to open the door a crack so they can get the jaws of life under. No luck. The temperature is rising as the fireworks its way through the house.

Travis and Ben fight about how the house needs to be vented but that cannot happen. The windows are made of tempered glass. Victoria calls Pruitt and asks him for tips on how to get the team out of the garage. Dean beats on the glass of the house to make a vent. It doesn’t work. They start breaking down the wall.

Ryan thinks he should hotwire the car and ram the door. Jack thinks it’s a bad idea with the carbon dioxide. They begin to argue. Ryan starts the car. Andy agrees with Jack. Ryan shuts the car off.

Victoria asks Pruitt what happened when he had team members stuck in a garage. He tells her that they died of suffocation. They need to think outside of the box.

They try to use hole saws to cut into the garage. The husband begins to panic that his wife is going to die. Travis commands everyone to spray their hoses at the garage to cool it down. It is 112 degrees inside. Jack is being pessimistic. Andy tells him not to give up. They try to open the door to the house, but that doesn’t work.

Pruitt shows up and talks to her through the door. He demands she stand up and fight. Find a way out. Maya rallies behind her. They all start to think. Maybe they can use the water heater. Use accelerant to blow the water heater into the door. Andy lights it. Maya thinks the valve might stop it. She runs to it. It explodes. She is thrown back. The door collapses. The team runs in. Pruitt hugs Andy while she yells at Maya.

The husband and wife share a moment outside. Ben smiles. The team heads to the bar. Jack asks Dean why he didn’t get the code by the radio. Victoria jumps in and tells him that it was an electrical malfunction. Jack talks to Andy alone and asks her how long she has been getting together with Ryan. Ryan walks over and asks if everything is okay. Jack demands to know. She admits for a while. He leaves the bar. Pruitt shows up and yells that drinks our on him.

Travis shows up to see Edith’s grandson. He walks into the restaurant and kisses him. He is surprised. Travis tells him he doesn’t want a slow burn. They don’t know what tomorrow brings. They kiss.

Pruitt tells Andy he did not support her or Jack. He did it because she comprised herself. She gets angry and leaves.