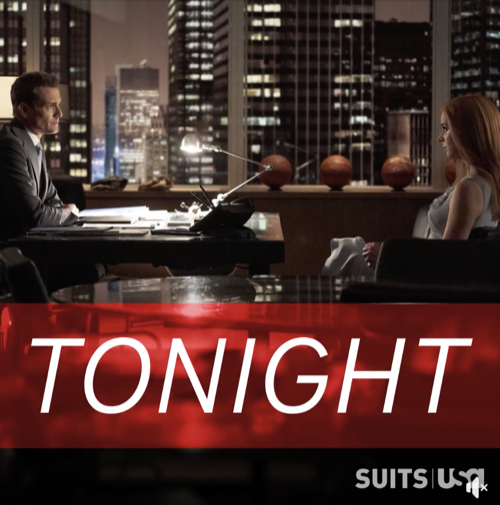 Tonight on the USA Network their critically acclaimed drama, Suits returns with an all-new Wednesday,  September 19, 2018, episode and we have your Suits recap below. On tonight’s Suits season, 8 episode 10 Fall Finale, “Managing Partner,” as per the USA Network synopsis, “When Harvey and Zane can’t stay on the sidelines, Donna does what’s best for the firm.”

Harvey, Robert, and Louis tell Sam and Alex they need to fight to be named partner. They have each been given a case. Whoever wins will get their name on the door.

Harvey checks on Alex, who wants his help. Sam asks Robert for the same. But he refuses to help her.

Meanwhile, Sam has a flashback. She is at a diner where she is approached by a guy named Tom from the FBI who wants information on her firm. He has her records and they aren’t sealed to him. She can help or he can reveal things she doesn’t want to get out.

Donna warns Harvey not to help Alex. It is going to rip them all apart. Sheila calls Louis. She has been offered the position of interim dean. She stops by as a surprise.

Flashback to the past, Sam goes to her boss Tom to tell him about the FBI. He asks her to dig into their books to see if she can find out who is laundering money.

Sam and Alex are in court fighting to see who will win. Sam pulls a fast one over on Alex by revealing a divorce record on his client. Alex accuses Sam’s client on the stand of trying to get payback against his client.

Sheila tells Louis that she can take the job as the permanent dean. She wants to do it and get a nanny. Louis doesn’t want her to work fulltime. She wants him to support her.

Flashback to the past, Robert finds Sam digging through files on a Friday night. He wants to know what she looking for. She tries to dodge the question but Robert tells her he is there late too to figure out what is going on with the money.

Robert comes to see Sam to offer his help. She asks him to get rid of a box full of files she wants to pretend she didn’t see from her client. He agrees.

Flashback, Robert and Sam meet a week later and Sam wants to know why he did a $100k wire transfer. He confesses he found out that all three partners were laundering money. They gave some to him to make him complicit. He gave it to charity. Sam goes to leave to tell someone, but he tells her he has a daughter who wants to be a lawyer. He needs her help.

Sam meets with Alex’s client at his house to offer him a deal. She has an incriminating video of him and she knows he destroyed a painting he is on trial for.

Louis talks to Katrina about his problems with Sheila and her taking a fulltime job. Meanwhile, Alex’s client has a list of all the things Sam did for him that was illegal when she was his lawyer. Alex doesn’t want to take that way out. He isn’t ruining her career.

Alex goes to Harvey and asks him to have Katrina impersonate Sam so he can get some files he needs or his client is going to ruin Sam’s life. Harvey says no at first but then gives in. Donna tells Katrina she should do it.

Alex brings a settlement agreement to Sam. He tells her that his client will have her disbarred if she doesn’t fold.

Sheila tells Louis they are pregnant. She doesn’t know if she wants that fulltime position. Louis hugs her.

Flashback, Sam tells Robert to find 2 people who have his back. Sam heads to meet the FBI agent Tom. She tells him he is barking up the wrong team. It is all a billing error.

Donna marches into see Harvey and Robert with Louis to tell them they are done the fighting. Louis is taking over. And Louis is making Sam and Alex both partners. The two agree after Robert talks Sam down.