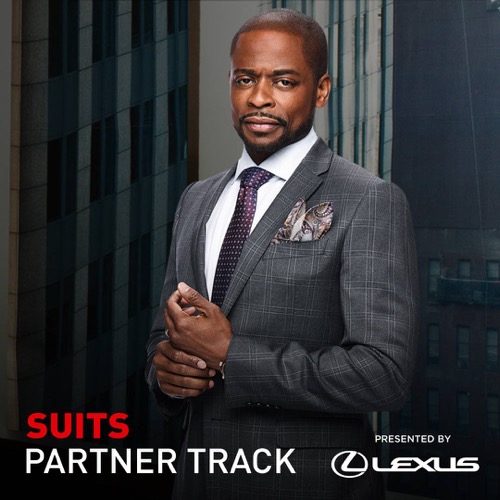 Tonight on the USA Network their critically acclaimed drama, Suits returns with an all-new Wednesday,  August 1, 2018, episode and we have your Suits recap below. On tonight’s Suits season, 8 episode 3, “Promises, Promises,” as per the USA Network synopsis, “Harvey is drawn into a dispute with the firm’s landlord; and Alex pursues Samantha’s ex-client.”

Harvey and Robert have drinks and talk about what they are going to do about both promising Alex and Samantha their name on the door. Harvey excused himself to the restroom. The cleaning lady is in there crying. He offers her a tissue and any help with whatever is wrong.

Alex promises Gavin he will get his father’s painting back and Delta Airlines. The next morning, Alex sees Samantha outside and tells her to back off. She scoffs at him. He shouldn’t have gone after her old client.

Louis comes to talk to Robert. He wants to know what he can do to make Katrina a senior partner. Meanwhile, the cleaning lady comes to see Harvey. She needs his help. The building owner owes her money for her services and she needs it right away to pay for her mother’s operation. Harvey tells her he will see what he can.

Louis tells Katerina she needs to manage Brian. She gets upset. She doesn’t have a lot of time. Louis tells her this is her chance to become a senior partner.

Harvey goes to visit David Fox about the building’s cleaning lady. He wants David to give her the money he owes her so she can pay for her mother’s surgery. Fox tells him he contracts the cleaning out so he has nothing to do with it. Harvey doesn’t believe that. He threatens him. Fox threatens him back. He does rent from him after all, so he needs to watch his step. Harvey laughs at him. He better pay the lady or he will come after him.

Alex tells Louis he needs Samantha to back off. He needs Louis to tell her to stop pursuing Delta. If he can do that for Alex, he can get Gavin. Louis goes to see Samantha. He demands she leave Delta alone or she will be sorry. Samantha humors him and agrees but she won’t forget their conversation.

A toilet on one of the floors is backed up and Donna can’t seem to get anyone to come in and take a look at it. She is told to talk to Harvey. She relays the message to Harvey, who gets mad knowing Fox is behind it. He tells Donna the story. She tells him to back off. Fox is no joke. He reluctantly agrees.

Brian meets with a client on a new case he was assigned with Katerina. She doesn’t show up. Brian tries to get through the meeting but he doesn’t know the details. The client gets angry. He feels unimportant. He tells Brian he is leaving and not to call him in for a meeting unless Katerina is going to be there.

Brian finds Katerina. She couldn’t make it. She had a migraine. All the stress of firing some of the associates have triggered a migraine and the fact that she has one shot at senior partner. Brian promises he won’t tell anyone about the migraines. He goes to Louis and apologizes. Louis rips him apart. Louis tells him this can never happen again. He stopped Katerina from firing him.

Harvey calls the cleaning lady. He tells her he has a firm that can help her because he can’t. It’s the old clinic Mike helped. Harvey heads down there but there isn’t a familiar face. He leaves.

Alex brings Gavin the painting that he wanted. Gavin is thrilled. He has already told the Journal who his new law firm is. Alex is happy until Gavin admits he is selling the painting Alex got him back. The deal seems like money laundering. Gavin admits to it. Alex doesn’t want anything to do with it, but Gavin threatens him. Their reputation is on the line now. He cannot back out.

Brian offers to help Katerina work on her case knowing she doesn’t feel good. Meanwhile, Alex pleads with Samantha for help to get him out of dealing with Gavin.

After getting through their workload, Katerina tells Brian she is sending him to court alone. She knows he can do it.

Robert arrives at the office. The elevators aren’t working. He knows this has something to do with Harvey. Robert, Louis, and Donna all talk to Harvey who has just learned that Fox fired the cleaning lady. Harvey is ready to go to war, but the three tell him he needs to stop now. He is going to cost them, clients.

Donna and Harvey talk. He doesn’t know how he got to this. Donna thinks he is missing Mike. She thinks he needs to call him so he can tell Harvey what to do.

Alex goes to see Gavin. He tells him he invested his money locally after making himself the trustee of the account. Gavin is in disbelief. Alex noticed the trustee on the account was Gavin’s niece and she would have taken the fall. After Alex told her she signed it over to him.

Katerina tells Louis the truth and how well Brian did in court. He is impressed.

Harvey brings Donna the solution to Fox and asks her to deal with it. She thinks Mike’s plan is genius. Harvey tells her it is his.

Donna brings Fox the deal. He needs to hire Anna the cleaning lady back and pay all of his worker’s fair wages or the clinic will follow through with a civil suit. If he drops it and hires Anna back, Harvey will give him free legal services for a year. He agrees.

Alex gives Samantha tickets to a UFC fight as a thank-you. She tells him about Robert’s promise that her name will be next on the wall.