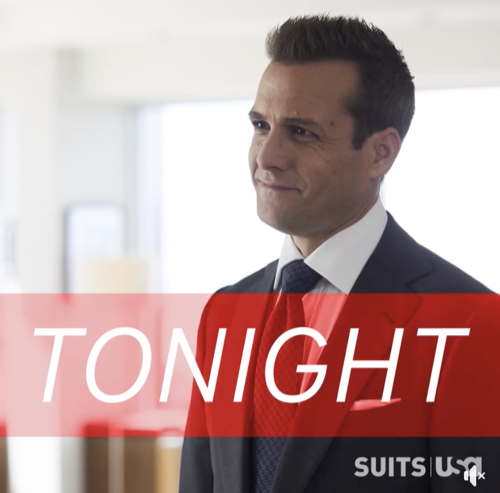 Tonight on the USA Network their critically acclaimed drama, Suits returns with an all-new Wednesday,  September 5, 2018, episode and we have your Suits recap below. On tonight’s Suits season, 8 episode 8, “Coral Gables,” as per the USA Network synopsis, “Harvey helps Samantha settle an old score. Louis faces a hurdle on the path to fatherhood.”

Samantha visits a former colleague. She plans to attack what little he has left. She is suing him for Gray Scales, a client he won’t release to come to her. She promises she will win.

Louis has taken the day off and he called out Sheila too. He is taking her to Colonial Williamsburg to cheer her up. She has made an appointment with a fertility clinic. He wants to go. He is ready.

Harvey confronts Sam about Gray Scale and taking them away with Eric, her former colleague. Harvey tells her to back down but she refuses.

Alex needs to find Louis but Gretchen tells him he is off today. Gretchen offers to help him get a document out.

Louis and Sheila meet with Chaz about trying to have a baby. Louis recognizes Chaz from high school who pretends he doesn’t remember him.

Erik has Sam’s case dismissed after telling the judge Sam used to work for Gray Scale.

Louis recalls his day in high school when Chaz beat him up for his homework when they were younger. He tells Lipschitz about it all. Louis is going to deal with these feelings because this guy is the best and the only way they are going to get their baby.

Alex is told that he has lost a deal because the documents Gretchen was supposed to send never got there.

Sam questions if Erik really has paperwork to prove she worked at Gray Scale. Meanwhile, Gretchen tries to get in touch with the courier who was supposed to send the package for Alex. She discovers he never picked up the package because it wasn’t there.

Gretchen goes to the client that didn’t receive Alex’s documents and tries to call in a favor but the young girl at the desk isn’t willing to help.

Harvey goes to pay Erik a visit. Harvey threatens to prove he doesn’t have any documents to prove Sam worked for Gray Scale and when he proves that he will have him disbarred for fabricating evidence.

Gretchen goes to visit Sam. She confesses to failing to send a document. Sam tells her she cannot help because if she does it will more trouble. She tells Gretchen to go to Alex and tell him the truth.

Louis recalls talking to his sister who admits she had a bully too. She offers him advice, to lay low. One day this will all be over. One day he can show him how powerful he is.

Gretchen pays Alex a visit. She tells him the truth. He gets angry. Meanwhile, Erik visits Sam and holds some illegal past dealings he knows about over her head. Or he will get her disbarred.

Alex goes to see his client to apologize and to make it right. Carla is mad and threatens to look for another firm unless Gretchen gets fired.

Sam calls the source Erik got in touch with. She asks her not to talk, but Betty wants revenge for what Sam did to her.

Alex tells Donna about his situation. The only thing he can think to do is to waive their bill for the last quarter and hope they stay with them.

Chaz meets with Sheila and Louis about surgery. While he talks, memories flood Louis memory, but he doesn’t react for Sheila’s sake.

Donna warns Sam to be careful when she tells her she is getting on a plane to go to Florida to see Betty. Donna tells Harvey. He tracks down Sam and tells her she isn’t going anywhere. He is going to fix this.

Louis meets with Lipschitz who has him reimagine the past but as an adult. The exercise helps.

Sam goes to see Erik. She is giving up but she is going to help Betty and he is too. Meanwhile, Gretchen tells Donna she wants to retire. She is tired. Donna talks her out of it. They hug when Gretchen decides to stay.