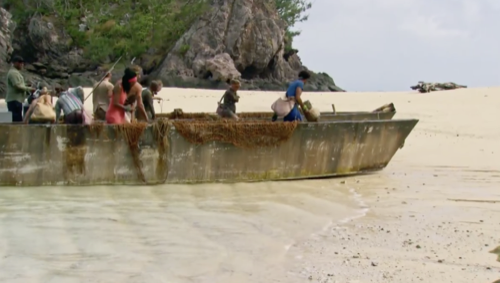 Tonight on CBS Survivor: Ghost Island airs with an all-new Wednesday, April 11, 2018, Season 36 Episode 8 and we have your Survivor recap below. On tonight’s Survivor season, 36 episode 8 called “Fear Keeps You Sharp,” as per the CBS synopsis, “The merge threatens to increase the tension between two ongoing rivals.”

Its time for the merge, everyone is excited. Chris is in the shelter and he notices that something is in his buff, it is a clue that there is something in tree mail. Chris waits for nobody to be around to go get his clue, it is a lead to a hidden immunity idol that is good for the next tribal council and more but there is a catch a boat will whisk him away at night to ghost island to retrieve it, is it worth the risk?

Chris is ready to go all in, he will take the risk. Chris manages to get off the island without anyone seeing him leave. At Ghost Island, he finds the original idol form J.T. from Survivor Game Changers in 2017.

J.T. left his idol back at camp when he headed to tribal council and was voted out, he was blindsided that night. This tainted idol lost some of its potency and is only good at the next tribal council. If Chris wants to increase the shelf life of the idol, he can choose bamboos to do it, but he also risks losing his vote altogether. Chris picks a correct bamboo, he can use it in two tribal councils. Chris gets a no vote and decides to stop.

Dom is making coffee and Chris is cranky and tired. Little does everyone know what he was doing last night. Dom wants to get rid of him real soon. The war between Chis and Dom continues, they both talk trash about each other behind their backs. Time for the first individual immunity challenge. For today’s challenge, they are going to stand on a narrow beam while balancing a statue on a long pole over their head.

If they fall off the beam or drop the statue, they are out. Jenna is the first one out, with Donathan following her. There is wind now and more are dropping. It is a showdown between Kellyn and Libby. The winner of the first individual immunity is Kellyn.

Its day 22 at Lavita and everyone heads back to camp after the challenge. Chris knows he needs to make a plan, he goes to get water and takes everyone there except for Dom and Wendell. Chris tells them they should go for one of them since they were going for Libby. Chris thinks this will flush Dom’s idol, Michael likes the plan and hopes that Chris is telling the truth that Dom has an idol. Meanwhile, Dom and Wendell strategize and they know that Chris has taken the rest of the tribe away to talk to them.

Wendell reveals to Dom that he has a real idol. Donathan returns to camp and tells Dom what Chris did. Libby knows there is a war going on and it’s tough to pick a side, she is just happy because she believes the target is off of her. Desiree meanwhile wants to get rid of Libby. Time for tribal council, Dom talks about how he and Chris butt heads from the beginning of the game. Dome says this tribal council is a showdown. Chris then tells how he was at Ghost Island Dom tried to vote out his closest confidence. Dom says that he is a target tonight. Wendell tells Jeff about how Chris took everyone for water away from him and Dom.