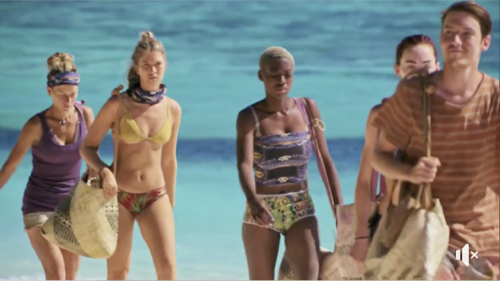 Tonight on CBS Survivor: Ghost Island airs with an all-new Wednesday, April 25, 2018, Season 36 Episode 10 and we have your Survivor recap below. On tonight’s Survivor season, 36 episode 10 called “It’s Like the Perfect Crime,” as per the CBS synopsis, “A determined castaway goes on a mission to break up a power alliance.”

Food is scarce, Desiree woke up and she is ok because she has been homeless and knows how it feels to e hungry. Desiree wants to take out Naviti, she thinks it would be a big move and good one at this stage in the game.

Time for the Reward Challenge, they are going to be divided into two teams of five, two members of each team will paddle in to rescue their other team members from three cages afloat in the water. They will then use the keys to unlock a series of puzzle pieces that they will use to solve a gigantic puzzle.

The first team to finish wins a reward, the winning five will be flown by chopper to a place where they will enjoy a picnic. In addition, the winning team will send someone from the losing team to Ghost Island. They draw for captains; Orange team is Michael, Sebastian, Chelsea, Kellyn, and Jenna.

Purple team is Wendell, Domenick, Laurel, Desiree, and Angela. Donathan is sitting out, he has no chance of reward or going to Ghost Island. The orange team is leading, but its anyone’s game at this point.

Team Orange kept their lead, they win – before they leave they have to send someone to Ghost Island, they decide to have the five draw for rocks, Angela is heading to Ghost Island and will return in time for the next Immunity Challenge. Michael is happy to be away isolated with some of the team, he tells them he knows he is on the bottom of the totem pole but promises he would be loyal if they worked with him.

At Ghost Island, Angela is full of anxiety but still excited to try and get an advantage. Angela loses her vote, she had a two out of three chance and lost. Laurel tells Donathan that she doesn’t want to go with Desiree – she goes to Domenick and tells him.

Domenick tells Kellyn when she returns what Desiree said and she is none to happy about it. Donathan and Michael head out to look for an idol. Domenick find’s Scott’s authentic immunity idol from Survivor’s 32nd season, Brains vs. Brawn vs. Beauty, in 2016.

Scott trusted his alliance believing Tai would combine idols to form a Super Idol. Scott did not play his idol and Tai changed his mind, it is considered on of the biggest betrayals in Survivor history. This tainted idol now has no power of it’s own, but when paired with Tai’s matching Idol becomes a regular idol with full power. Tai’s idol is hidden underneath the center of your shelter and he will have to find it to reverse the curse. Time for the Immunity Challenge, Angela returns from Ghost Island.

For today’s challenge they are going to balance a ball on a disc attached to two ropes, at regular intervals they will move their hands farther down the ropes making it more difficult to balance and if at any point their ball drops, they are out of the challenge. The last person standing will be safe at Tribal Council.

Wendell is the first out, then Jenna and so on. Chelsea wins individual immunity, it was quite the showdown – she is the third woman in a row to win immunity.

Desiree is now talking about voting out Kellyn. Meanwhile, Kellyn wants to get rid of Domenick. Laurel’s game is blowing up in her face by Desiree who is lying that she wanted to vote out someone from Naviti. The Naviti seven is about to shatter, Michael might just have a chance to stay in the game after all.

At Tribal Council Laurel says that Desiree was lying, Donathan jumps in and agrees with Laurel. Michael intervenes and Desiree doesn’t look good. It is really difficult and nobody knows who to believe. Michael doesn’t feel comfortable but he is pretty happy that there is so much negativity against Desiree.

Time to read the votes, six votes for Desiree, that is enough, she is voted out. One her way out Desiree tells the ladies to keep on winning.